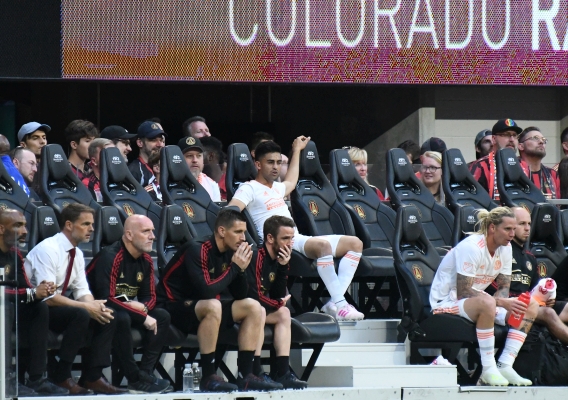 Week 9 was the worst week of the 2019 MLS season, so far. A lot of the games were poor and the East's struggles are not pretty. Still, young players are continuing to be encouraging this season and better games are on the horizon.
BY Brian Sciaretta Posted
April 29, 2019
11:55 AM
THE NINTH WEEK of the MLS season is over and it is probably a safe bet that this was the worst week of the season, by far. There just weren’t a lot of good games and the Western Conference just wracks up points on the East, almost at will. On top of that, the strongest team’s disappointed, and some of the best players acted poorly.

Unlike the previous week when LAFC stomped on Seattle with some impressive soccer, this weekend saw no one really step up to the plate and take the game over. The best argument could be made for Houston but its win came off a taking Columbus team that lost its fourth game in a row.

Portland strolled into Toronto and came away with a 2-1 win over Toronto but this revealed more about Toronto than Portland. For all the talk about how much Alejandro Pozuelo helps Toronto (and he is a very good player), it’s the combination of Pozuelo and Altidore that is makes the difference. With Altidore out, Pozuelo is containable – and Portland neutralized the Spaniard effectively. Toronto remains a team that has a lot of holes right now.

This weekend really showed the gap between the conferences. There were six interconference games and the Eastern Conference team won just one. That was when the ever-disappointing Atlanta United squad playing at home beat arguably the worst team in the league, in Colorado, by just a slim 1-0 margin.

DC United should be better than Minnesota on paper, but lost at Allianz Field 1-0. Toronto lost at home to Portland 2-1. Houston outclassed Colorado 2-0 in Texas.

In Canada, Vancouver drew Philadelphia 1-1 which was a good result for Jim Curtin’s crew. Curtin hasn’t had an easy hand this season but he’s dealt with it well. This team was injured and was missing Andre Blake, Mark McKenzie, and Marco Fabian but still came away with a point 3000 miles from home. The Union are willing themselves to results right now but it remains to be seen how good this team can be when it fires on all cylinders.


Felipe Gutiérrez scores the SEVENTH goal of the game!

It leads to a bigger point about Sporting Kansas City right now in that they seem to be very prone to defensive gaffes. Without Matt Besler in the lineup, the team clearly misses its anchor in the back. Roger Espinoza brings the team its spine and he is out.

But all teams have to deal with injuries. Sporting Kansas City has two major problems. For one, it doesn’t seem like it can win with a B+ lineup – and that’s not good. Second, that backline is just old when everyone is healthy. Matt Besler, Graham Zusi, and maybe even Seth Sinovic starting together should be a concern.

After Atlanta win over Colorado, Rapids head coach Anthony Hudson lamented about the gap in quality between Colorado and many of the league’s other teams.

“We are fighting down the bottom with a bottom group of players,” Hudson said. “We come to a place where a team full of superstars and big-money players and massive, massive gap in class…Today was just another example of the real gulf in class. I think every single game we’re playing against teams and their DPs are making a difference. People think we are on the same level, we’re not.”


Colorado's Anthony Hudson: 'We are fighting down the bottom with a bottom group of players' https://t.co/yigSjgnsxC @pkedit pic.twitter.com/3jrAvLmklM

It is true that Colorado remains one of the most unambitious teams in the league and there really isn’t anything that would make a casual fan of the league watch a Colorado game if other MLS games were also available to watch. While, Colorado is playing young players like teenagers Sam Vines, Cole Bassett, or now 16-year-old Sebastian Anderson – the team isn’t nearly as successful as Dallas and their youthful approach.

The problem with Hudson is that his team is extraordinarily bad at defense – on pace to concede the most goals in league history for a single season – and the team has actually spent a lot of money on goalkeepers and defenders. Tim Howard is the only designated player while defenders Danny Wilson and Tommy Smith are TAM signings. If the team could play defense, it wouldn’t be great, but it might not be terrible either.


MLS isn’t a retirement league as the biggest purchases aren’t the older European players anymore but rather South Americans and some other European in their prime. Overall it is a healthier approach and one where the huge cash outflows can also bring the inflow of sales if handled right – like Miguel Almiron.

What is going to be interesting is how MLS teams handle things when it doesn’t go well. Handling an aging start that doesn’t perform well is one thing but handling a struggling star player who came to MLS to use it as a stepping stone to a huge European league is completely different. MLS isn’t a place where players are coming to cash out but rather it’s a place where they’ve come on their path to the highest level. Almiron’s two years in this league were huge.

But the situation with Pity Martinez isn’t good for Atlanta and it’s not good for the other teams in the league. Whether or not it is Pity’s fault, it’s a big problem for the reigning South American player of the year to come to this league, struggle, and look visibly frustrated on the bench. Just as Almiron’s sale generated a lot of headlines, Martinez is being watched by a lot of other players in South American who are debating whether or not to head north to MLS.

It's better for everyone when Martinez, Kaku, and Ezequiel Barco come here and do well. Instead, all have struggled. The latter two have had their issues off the field and the Red Bulls probably made a mistake not selling Kaku to Club America over the winter. Martinez is also struggling under Frank de Boer who is coaching a different style than what suits the Atlanta players.

But generating more Almiron’s is clearly an important challenge when the league’s teams are willing to spend on bringing the talent here. It’s critical towards having this pipeline of players.

Meanwhile, the problem of bad behavior isn’t limited to young or prime age South Americans like Barco or Kaku. Rather, Zlatan engaged in taunting that was a bad look and completely unnecessary for a player of his talent and accomplishments.


Zlatan Ibrahimovic went into the locker room apparently to apologize to Nedum Onuoha for fouling and taunting him during the game. Nedum wanted no part of his apology. #mls #RSL #rsltid pic.twitter.com/F2zcmPTbC2

Zlatan goes to have a conversation with Nedum Onuoha in the #RSL locker room after #LAGalaxy's 2-1 win in Carson tonight. #MLS pic.twitter.com/Nc8ggQuQ9D


And it wasn't just limited to players in MLS right now. Future targets are also being cited for poor behavior.


Timbers target Brian Fernandez being investigated by the FMF. Likely to get suspended for spitting towards a fan who insulted him. Shame after such a brilliant season for Necaxa. #ligamxeng https://t.co/VlwKyzO5aM

The Red Bulls finally got a win but it was about as unimpressive as it gets. It beat an expansion team at home on a 1-0 score (with its fullback getting the goal) but only after Cincinnati hit the woodwork three times. The Red Bulls deserved the lead at halftime but completely fell apart in the second 45. Where is this team’s killer instinct?

The team is just older now and the defense is under way too much pressure when the offense can’t score. Selling Tyler Adams, Dax McCarty, and Sacha Kljestan was one thing but the team can’t entirely promote from within.

Chris Armas has come under fire but there is just a lot of stagnation at this club. Even good clubs need a steady flow of turnover. Some players get complacent, others get older. The Red Bulls are hoping to stick with a good thing for another year without making key decisions like helping Bradley Wright-Phillips with high-ceiling goal scorer or finding playmakers or ball winners in the midfield. Meanwhile, the club’s academy is not what it once was. Not selling Kaku was a huge mistake.

The summer window is going to be a very interesting time for the Red Bulls. It will need to make interesting and smart decisions.

That being said, it was great to see the ever-loyal Conor Lade throw his team a lifeline for its season with a very well-taken goal.


Conor Lade is having an epic game and gets the goal. He’s pushing forward effectively, gets this goal (great assist from Royer), and is neutralizing Kenny Saief on defense https://t.co/J3APD4Iw0e

Overall there were 24 players eligible for U.S. youth national teams who played over the weekend in Week 9.

That number could have been higher if Mark McKenzie and Julian Araujo were healthy, but it is still pretty good.

Jackson Yueill continues to impress for San Jose and should be part of the U.S. U-23 team. Miles Robinson and Donovan Pines are also having nice seasons in central defense. DeJuan Jones meanwhile scored his first professional goal.

U.S. U-20 head coach Tab Ramos was on hand to watch the Red Bulls down Cincinnati and he probably took note of Omir Fernandez who is trying to make the U-20 World Cup team next month. Fernandez is a pretty good player although raw at the moment. What stands out about Fernandez is that he draws a ton of fouls every game he plays. If he continues to play, he might develop his final ball and become dangerous.