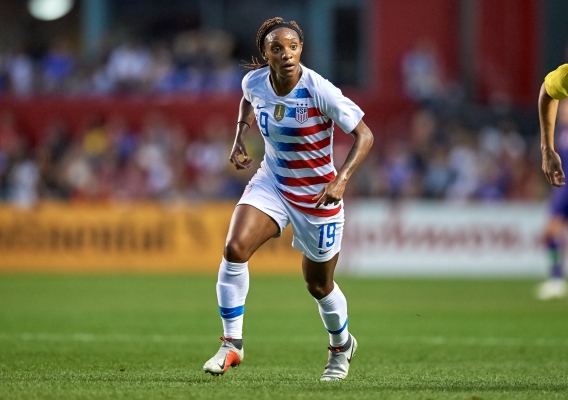 In recent years, Crystal Dunn has worked hard on her overall game to the point where she is now world class in three different positions. Now an important part of Jill Ellis' plans for the USWNT, Dunn has started eight in a row - with the USWNT going undefeated in that run.
BY John Halloran Posted
August 06, 2018
7:00 AM
THROUGHOUT Crystal Dunn’s five years as a professional, two persistent storylines have followed her career.

The first, a tale of redemption, started in 2015 when Dunn failed to make the World Cup roster, but went on to win both the NWSL Golden Boot and MVP award in the same year. The second one is happening right now, as repeated stories over the past two years have examined every possible angle of Dunn's "versatility."

The versatility narrative is a tough one to ignore, simply because it may be one of the most impressive feats in modern sports. Dunn won a U-20 World Cup as a right back in 2012, before leading the University of North Carolina to a national title that fall playing the first half of the season as a center back and the second half as an attacking midfielder.

Her 2015 MVP campaign with the Washington Spirit came as a forward, while she currently plays as a No. 10 for the North Carolina Courage, the most dominant team in the NWSL. Internationally, for the best team in the world, Dunn has started the last eight games in a row at left back while helping the United States win the SheBelieves Cup and the Tournament of Nations.

At a minimum, she is a world-class player at three positions and there’s no doubt she can contribute at several others—all at the top level of play for both club and country.

Dunn remains a good soldier when answering questions from the media about her versatility and positional switches, ones she surely must be sick of answering at this point.

“If you look at this year, basically, I didn’t anticipate playing outside back on this team, but it’s a position that I’m trying to come in form with and play it by ear and just try to get better every single day and play the role that I’m given,” she told the media ahead of the Tournament of Nations’ finale against Brazil.

“Jill and the coaching staff know I’m attacking-minded in a sense and, for me, it’s really about how can I help out in the attack as well as being connected to my backline.”

Despite her modesty, Dunn’s coaches and teammates know how valuable she truly is to the squad, especially with a series of injuries depleting the pool at outside back and the U.S. still looking for the best combination on its defensive line.

Ellis lavished praise on her defender last week, explaining that Dunn covers the entire field from endline-to-endline, minding her attacking and defensive responsibilities with equal vigor. The coach also pointed out that Dunn is rapidly improving as she’s settled into her new position over the last few months.

“Her defending, her work rate, tenacity, and then just getting forward and getting into the final third—[I’m] really pleased with her tournament,” the coach added. “I think she had a really great tournament.”

On the left side, Dunn has combined with winger Megan Rapinoe to form a devastating partnership in the attacking third. As the Americans go forward, Dunn frequently makes overlapping runs that give the U.S. numbers-up opportunities on the flank and force opponents to make a difficult choice.

When Ellis first moved Dunn into the backline, many complained she would be wasted at the position. However, Dunn’s 1 v. 1 defensive ability, her recovery speed, her ability to hold the ball under pressure, and her excellent service from the wide position have proven that worry to be a moot point.

And the results speak for themselves. In her eight-game stretch in the back, the U.S. hasn’t lost and, along the way, notched wins against the teams ranked No. 4, No. 6, and No. 7 in the world.

As the Americans head into World Cup qualifying in October, it’s safe to say that Dunn playing at left back is no longer an experiment, it’s part of the best lineup the U.S. can put on the field.