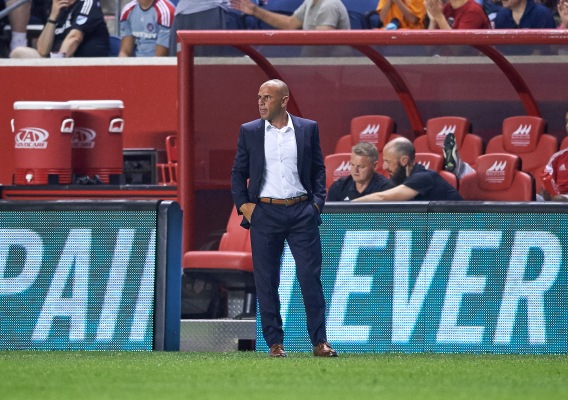 Down The Stretch They Come! Inside the 2018 MLS Shield Race

The MLS Supporters Shield race is wide open at the moment and Mark Fishkin is here for ASN to breakdown the teams in contention
BY Mark Fishkin Posted
August 13, 2018
1:20 AM
Now firmly in the final third of the MLS regular season, the 2018 Shield race is as tight as it’s been in years, with five teams that have a decent shot at the crown. Here’s a look at each side, and their (possible) road to the title.

With only four of the Five Stripes’ remaining ten matches at home, Atlanta will have to earn the Shield away from Mercedes-Benz Stadium. Atlanta benefits from the easiest remaining schedule of the five contending teams, with contests to come against the bottom six teams on the league table. That group includes a visit to an awakening Colorado (winner of two straight since acquiring Kellyn Acosta), and a trip to BMO Field on Decision Day against a revitalized Toronto FC, which may be playing for a playoff spot.

The Red Bulls have still been winning under new coach Chris Armas, but the matches have been tighter than they were with Jesse Marsch at the helm. Six of New York’s seven matches under Armas have been decided by a single goal (RBNY is 4-2 in those games). The Red Bulls play at Vancouver, then at Yankee Stadium this coming week, but only have to leave the East Coast only once more after that, to league cellar dweller San Jose. New York’s fate may be decided starting this Saturday, when the Red Bulls kick off a run of five matches over fifteen days (at VAN, at NYC, v DCU, v HOU, at MTL).

Despite winning at Toronto late on Sunday, City’s road form has been so-so this season (just 4-5-3). The club hits the road for three of the club’s final five matches, and still has to visit Columbus, where Crew SC is 8-2-3, and Minnesota, where the Loons are a solid 8-4-1. NYC tangles twice with a revived Philadelphia team that appears to be rounding into form, as well as a pair of matches against DC United. To NYC’s benefit, the club has yet to lose at Yankee Stadium this season. City can lose the Shield but still end up with a 2019 CCL spot for the best regular season record over the 2017 and 2018 seasons.

Dallas benefits from a home schedule filled with poor road teams like Minnesota (1-9-1 away), Houston (1-6-4) and Orlando (2-10-0). Despite losing at Seattle last night, FCD has dropped only four road matches this season, which will give Oscar Pareja’s club plenty of confidence. The 2016 Shield winners still have to visit Cascadia clubs Vancouver and Portland, Audi Field, and will spend Decision Day at altitude at Colorado. Dallas has only one remaining midweek match, August 29th at San Jose, where the Quakes are a woeful 1-5-4.

Despite ending a 15-match unbeaten run Saturday night, The Timbers have the most matches to play among the five contending teams. The bad news is that Portland has the toughest stretch in the group, including visits to strong home sides SKC, Minnesota, and Salt Lake. The Timbers play three matches in eight days three more times down the stretch (Saturday vs. Vancouver-at DC-at SKC, v SEA-v TOR-at NER, and at HOU-v CLB-at MNU) Given all Portland trails Atlanta by eleven points, any slip will probably put the Timbers out of the race.