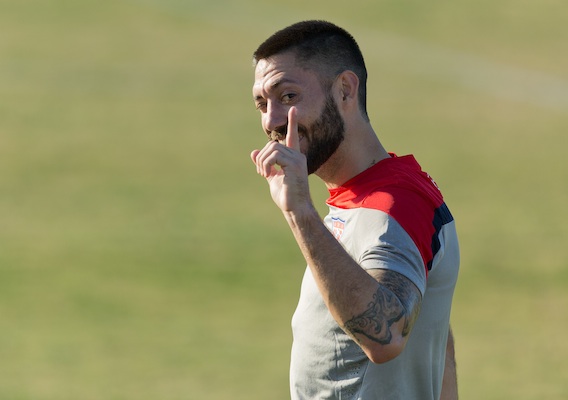 MAJOR LEAGUE SOCCER suspended Seattle Sounders forward Clint Dempsey for three games for swatting referee Daniel Radford's notebook out of his hands and then tearing it to pieces during a U.S. Open Cup match on Wednesday.

Dempsey and U.S. national team head coach Jurgen Klinsmann should both feel very fortunate at the moment, as the short suspension allows Dempsey to return to action before the Gold Cup begins in July.

“We do not tolerate conduct of this nature from any of our players,” MLS Deputy Commissioner Mark Abbott said via the league's PR site. “No matter how passionate our players are or what happens in the ‘heat of the moment,’ they must always respect all aspects of the game, especially the referees. In light of Clint’s actions and our past precedents, we felt that a significant suspension was appropriate.”

Despite the tough talk, the league took the easy way out and gave one of its biggest stars the shortest-possible suspension.

Referee abuse is specifically mentioned in the governing statutes, as is damaging the referee’s personal property and/or equipment. Players determined to have done so face a minimum six-game ban. Given the three-game suspension, MLS must have determined that Dempsey did not damage Radford's personal property.

While people can argue whether or not the rules are fair, it required some imaginative interpretation from MLS officials to determine that Dempsey did not destroy the ref's equipment. The scene, caught on video, clearly shows Dempsey picking up the notebook and destroying it out of frustration.

WHO SHOULD BE NAMED CAPTAIN OF U.S. GOLD CUP TEAM?

As a result of the ruling, Dempsey will miss the next three Seattle games—against San Jose, Philadelphia, and Portland.

The loser in this embarrassing episode is MLS which will now be viewed as arbitrarily bending its rules yet again to fit a desired agenda.

As Brian Straus reported following the decision, the three-game ban was decided by Don Garber himself and not the league’s disciplinary committee. For all of the talk about the rift that exists between Don Garber and Jurgen Klinsmann, the German-born head coach looks like he owes the MLS Commissioner a steak dinner.

For a league that is often accused of making up the rules as it goes along, it appears that nothing has changed.

What do you think—did the league do enough to punish Dempsey? Share your take below.