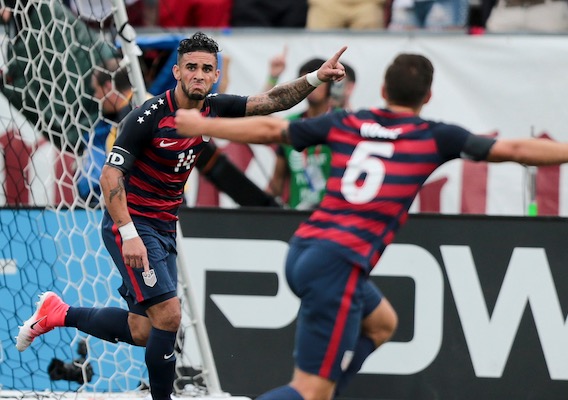 EAST HARTFORD, Conn.—A pair of U.S. national team players opened their international accounts, and that was enough to see off Ghana in a tune-up before the start of the CONCACAF Gold Cup.

Dom Dwyer and Kellyn Acosta scored their first U.S. goals to help pick up a 2-1 win vs. Ghana in a friendly at a muggy Pratt & Whitney Stadium on Saturday evening. Acosta netted the winner on a free kick in the 52nd minute, but the Americans had to endure a somewhat nervy finish after long-time nemesis Asamoah Gyan scored via gorgeous set piece of his own at the one-hour mark.

"I thought it was a very good friendly to play in," Bruce Arena said afterward. "Ghana has a very good team, quality players, so it was really very challenging. We had three players that received their first caps today and the first time a lot of our players had ever played together before. Our (attacking) four players had never played together before, so that was good to get this experience.
"I think as the game went on we had a little bit more continuity and i think it was two good teams playing today."
Gyan had an opportunity earlier in the match to score and bring Ghana level, but his penalty kick in first-half stoppage time was poorly taken and easily saved by Brad Guzan.

The Americans initially took the lead in the match played in front of 28,494 fans in the 19th minute. On the play, Joe Corona took a shot Jorge Villafana unintentionally kicked into the air and Dwyer sized it up perfectly before unleashing a sizzling left-footed volley into the back of the net.

The debuting striker threatened to make it 2-0 five minutes later when Joe Corona slipped in a great through ball behind the defense. Ghana goalkeeper Richard Ofori Antwi rushed off his line to try and put out the fire, but he wiped out Dwyer and earned a yellow card that some observers and fans thought was worthy of a red.

"We conceded too many free kicks in dangerous spots," Arena said, "we got caught a couple times on the counter—which is to be expected when you play Ghana. They have excellent pace all over the field and they get out at you a couple times."
The Ghanaians, who had plenty of style but not enough substance on the day, had a golden opportunity to pull level just before halftime. After Jorge Villafana was called for a foul on Frank Ancheampong inside the penalty area, Gyan stepped up to the spot but proceeded to hit a poor shot to the right that Guzan pushed wide to keep the Americans ahead.


"I was able to go the right way, get a hand on it, and keep it out of the back of the net," Guzan said. "There was a little bit of (studying) video but it wasn't video overload. Matt Reis and I had a chuckle at halftime, so it was good."
Bruce Arena’s side eventually found its second goal, as Acosta scored on a free kick seven minutes after the intermission. Acosta did not take an exceptional shot from about 20 yards out, but his low effort to the far post took a bounce off the grass that duped Antwi.

Ghana made things interesting when Gyan made amends for his missed penalty kick. Gyan struck with a gorgeous curling free kick from distance in the 60th minute that Guzan could not keep out despite getting a hand on it. That was as close as the Ghanaians got, however.

Antwi even had to come up with two other big saves to keep the difference at one goal. He denied Dwyer of a brace in the 58th minute, and made a miraculous save on a late Alejandro Bedoya header at the back post.

The U.S. will now head back to Nashville, Tennessee, where it will face Panama in its Gold Cup opener on July 8.