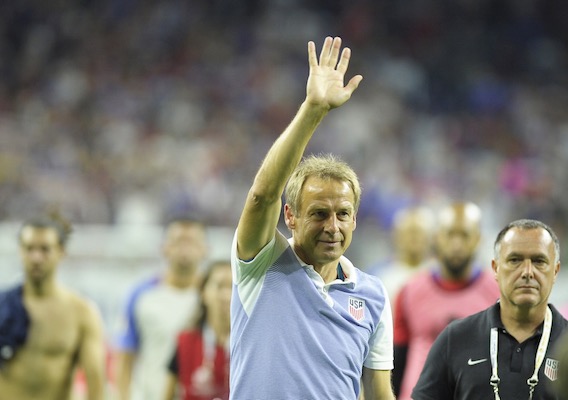 Despite Timid Loss, U.S. and Klinsmann Can Stand Tall

While it's true that Tuesday's 4-0 loss to Argentina was a complete debacle, Jurgen Klinsmann and his players deserve plenty of credit for their overall performance in Copa America Centenario.
BY John D. Halloran Posted
June 21, 2016
11:55 PM

THERE'S NO DENYING IT: Argentina gave the United States men’s national team a thorough drubbing on Tuesday night en route to a 4-0 victory, unceremoniously dumping the Americans out of the Copa America Centenario.

After spending the days leading up to the contest complaining about the “underdog” narrative and telling his team to “be courageous," U.S. head coach Jurgen Klinsmann elected to start an uninspiring and conservative lineup in Houston, including veterans Chris Wondolowski, Graham Zusi, and Kyle Beckerman in his first XI.

The choices didn’t work and Argentina dominated the Yanks from start to finish.

On another night, and perhaps with a bit more courage from the manager, the result might have been different. Forced into three changes due to suspensions, Klinsmann decided to leave Darlington Nagbe and Christian Pulisic on the bench against La Albiceleste, while he left Jordan Morris—who certainly would have provided a greater spark than the overmatched Wondolowski—off the tournament roster from the very beginning.

However, Klinsmann must be credited for a number of correct decisions in this tournament. The U.S.’ two losses came against the No. 3-ranked Colombians and No. 1-ranked Argentines, while the Americans picked up decisive wins against Costa Rica, Paraguay, and Ecuador.

The coach stuck with Jermaine Jones and Clint Dempsey after poor performances against Colombia—and after many had called for their benching. He stuck with Bobby Wood—who missed some absolute sitters in his early caps with the U.S.—and with Gyasi Zardes, despite repeated criticisms about the Los Angeles Galaxy forward’s lack of a quality first touch.

All four proved to be major contributors to the U.S.’ success in Copa America.

Klinsmann also started the same lineup in all three group stage games—after repeated criticisms for his lack of consistency—and only made changes to the Starting XI when suspensions forced him to do so. The coach also coaxed peak performances out of Geoff Cameron and John Brooks in the tournament after Brooks’ poor showing in the 2015 Gold Cup and after facing criticism for leaving another center back, Omar Gonzalez, off the Copa America roster.

Klinsmann finally used DeAndre Yedlin as a back, instead of as a winger, and pragmatically did the opposite with Fabian Johnson—dropping the Borussia Monchengladbach winger into the back line to fill in the team’s hole at left back.

Most uplifting of all, the U.S. played with its old, familiar team spirit during the tournament, something that had gone missing after the 2014 World Cup. During Copa America Centenario, the Yanks played with effort, competitiveness, and inspiration.

None of this is to say there isn’t work to be done. U.S. fans should expect the team to win home games against CONCACAF rival Costa Rica and 44th-ranked Paraguay—which went winless in the tournament. The win against Ecuador in the Round of 16 also came in Seattle, arguably the best home-field advantage in America.

Klinsmann can also be fairly asked why he hasn’t found, or developed (to the extent a national team coach develops, or at least shepherds, talent), more capable replacements for the 2014 World Cup veterans over the past two years. Instead, he relies on players like Wondolowski, Zusi, and Beckerman, who clearly aren’t up to the task. At the same time, it must be admitted than any replacements he finds are unlikely to be competitive with the Argentinas of the world.

But even with the warts, Klinsmann and the U.S. squad gave its fans, and the country, a performance they could get excited about. Their backs against the wall after the loss to Colombia, the team strung together three wins and a tournament that has the potential to provide a steppingstone toward an even brighter performance in the 2018 World Cup.