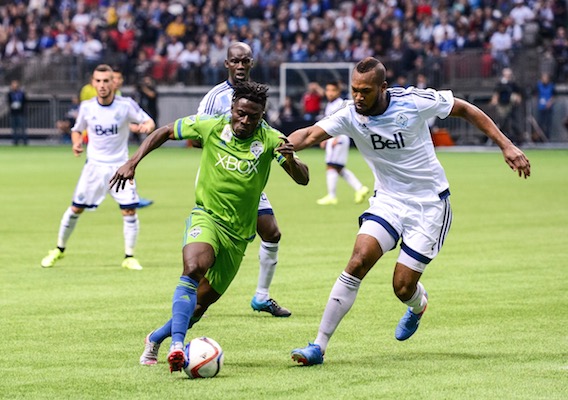 Obafemi Martins left MLS to play in the Chinese Super League—an entity that splashed the cash during the latest transfer window. But China's top tier faces plenty of issues as it looks to expand.
BY Nick Kariuki Posted
March 15, 2016
7:00 PM

THE CHINESE SUPER LEAGUE made plenty of noise during the most recent transfer window. The CSL transfer record was broken three times over the space of 10 days, topping out at $56.1 million with Liverpool target Alex Texeira’s switch from Ukrainian club Shakhtar Donetsk to Jiangsu Suning. Industry website Transfermarkt totaled the overall spending at $365 million, topping the English Premier League’s spending of $275 million.

The quality of the players acquired also stood out. Household names like Gervinho and Ramires would have had no problem finding a starting XI at top tier clubs in Europe. Texeira and Jackson Martinez seemed destined for bidding wars for the upcoming summer window before their surprise moves.

And, of course, Chinese soccer’s growth hit a little closer to home with Obafemi Martins’ move from the Seattle Sounders to Shanghai Greenland Shenhua—demonstrating that even stars from up-and-coming leagues like MLS weren’t safe from the promise of higher payrolls. When you compare Ezequiel Lavezzi with Nigel de Jong, or Freddy Guarín with Yura Movsisyan, it’s hard not to feel that the more exciting names ventured East.

Is this a sign of an emerging league that will leave others—Major League Soccer included—in its wake as it rockets towards world domination? Probably not anytime soon, says Cameron Wilson, editor of Chinese soccer blog Wild East Football. While China has clearly shown that it has some financial sway in the global soccer market, it still needs to deal with grassroots development and infrastructure before it can truly arrive on the global stage.

Here are some reasons why American soccer fans shouldn’t be too worried about China’s rise in soccer—at least for now.

Big-mony deals in the 12-year-old CSL are not new, and neither are high-profile signings. Montreal Impact striker Didier Drogba did a short stint with Shenhua, joining Nicholas Anelka for what were probably (I was a first-hand witness) “Le Sulk’s” most languid performances of his career.

The CSL first drew attention for breaking the bank in 2011 when Guangzhou Evergrande signed Argentine Darrío Conca from Brazilian side Fluminense, paying the then-28-year-old an amount on par with Cristiano Ronaldo and Lionel Messi. Even the caliber of managers has been remarkable, with World Cup winners Marcello Lippi and Luiz Felipe Scolari serving at Guangzhou.

The most recent cash-injection into the Chinese league has come from the sale of its broadcast rights for $1.3 billion over five years, rising dramatically from $13 million the year before. To compare, the MLS’s current domestic broadcast deal with ESPN, FOX, and Univision is worth a combined $720 million over eight years.

Pouring revenue into clubs at a loss has far less adverse consequences for owners, who instead tend to gain government favor for the high-profile spending.

While CSL clubs are sufficiently deep-pocketed to pay more for marquee signings, MLS allows for more foreign player in its teams. In North America, each club starts with eight international player slots and can use or trade them, allowing for 160 foreign signings. In the Super league, clubs are only allowed five, with one having to be from a nation in the Asian Football Confederation. By the window’s close in February, all of the slots were filled.

The pattern that has historically followed is that most of a team’s foreign players are moved out quickly and replaced, in some cases within one season. The high turnover leads to a fairly volatile squad structure and inhibits consistent performance.

Shipping in recognizable foreign talent helps with TV ratings and match attendance, but it also highlights the gulf in talent between the foreign stars and the domestic players. The Chinese national team currently sits at 93rd in FIFA's rankings, right behind Botswana and Honduras. The side’s two recent World Cup qualifiers against Hong Kong both ended in goalless draws, much to the satisfaction of Hong Kong fans.

When you look at the starting lineups in the CSL, it’s not hard to see why China’s attack is toothless. “Because [teams] tend to spend their transfer budget on attacking players, there are no Chinese strikers getting a regular game," Wilson said.

That said, the league has displayed pure protectionism for one position; all goalkeepers must be Chinese players.

The CSL currently features 16 teams. As in America, local governments in China are motivated to launch franchises in part because of the civic pride and status that teams can bring.

While Wilson projects that two more clubs will be added in the next five years, he acknowledges the difficulty owners would face scraping together the domestic talent necessary to make those new teams competitive.

Like player development, the infrastructure and commercial management of the league fails to prioritize the small measures that are important for a professional competition. One example: The away fans at a 2014 league match between Beijing Guoan and Hangzhou Greentown had their view of the nearest penalty box and goalmouth obscured by a stage from a concert the night before.

Another: Up until this season, Hongkou stadium, home to Shanghai Shenhua, was used as a driving range on non-match days. Compared to the CSL, Wilson says that the MLS is “light years” ahead.

In all phases of the game (playing, coaching, administration) nepotism and paternalism are still present and lead to unprofessional decision-making. Breaking through purely through talent or ambition is tough and discourages many from trying. Mix this with crackdowns for overt corruption or match-fixing, most recently in 2013, and you have a relatively dysfunctional institution.

Chinese president Xi Jinping has made the advancement of the domestic game a priority, publishing a 50-point reform plan for the game and setting the goal of hosting and winning the World Cup. Wilson minimizes the president's contributions, however: “He's not revolutionizing things. He's continuing a process that started years ago."

Though China is no stranger to hosting large-scale tournaments, the thought of seeing their national team overwhelmed at home during a World Cup will keep that from being a short-term goal.

“The Chinese are particularly sensitive to [keeping] face and being respected in their own turf and I think they would just find it too humiliating to be beaten that way,” Wilson said. “China won't host the World Cup until it's certain it can make a decent showing of itself on that stage.”

Nick Kariuki is an ASN contributor. While working in Shanghai, he picked up an interest in the development of Chinese soccer and attended several Shanghai Shenhua matches. Follow him on Twitter.