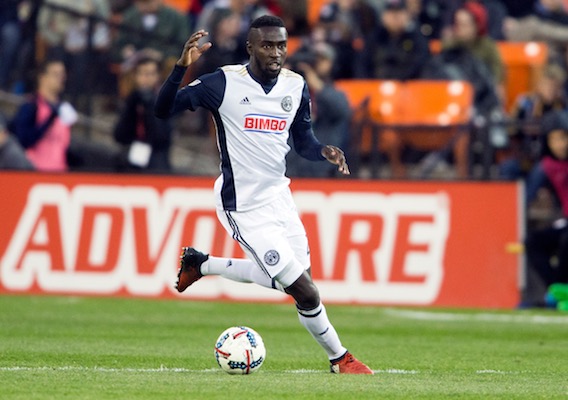 Derrick Jones Standing Tall for US U-20s in South Korea

The 20-year-old Ghana native moved to the Philadelphia area in 2011, and both the Union and U.S. U-20 coach Tab Ramos are happy to have the six-foot-four midfielder playing for their sides.
BY Brian Sciaretta Posted
May 26, 2017
12:00 PM

THE UNITED STATES and Ghana have developed quite a soccer rivalry in recent years, having met in three consecutive World Cups and one U-20 World Cup since 2006. It wasn’t until the now-famous gamewinner from John Brooks in 2014 when the United States finally got past its African nemesis.

The Americans look like they have scored another win over Ghana: Midfielder Derrick Jones was born in Bantama, Ghana, but immigrated to the U.S. in 2011 and is now representing the Stars and Stripes in the U-20 World Cup in South Korea. He's a high-ceiling player with great physical tools and a fearless approach to the game.

Jones, now 20, has steadily progressed as a player in the United States, moving from Junior Lone Star FC of the fourth-tier NPSL to the Philadelphia Union academy. He was the first-ever signing for the Union’s USL team, the Bethlehem Steel, and then became the first player in team history to move from the Academy to the first team in 2017.

Even with his success for the Philadelphia Union this year, Jones has stepped into the international spotlight at the 2017 U-20 World Cup in South Korea and has been one of the best surprises for the Americans. On Monday he came into the game against Ecuador in the 34th minute for an injured Gedion Zealem. Two minutes later he sprung a counter attack that led to the team’s first goal. In the end, he was a dominating force in a 3-3 draw.

On Thursday Jones started and went the distance as the U.S. team defeated Senegal 1-0 while holding its opponent to only two weak shots on goal. Jones has earned the accolades of his teammates and coaches.

“He did very well in the first game,” Tab Ramos said of Jones. “He got thrown into a very difficult position. It's not easy to go into the center of the field in the middle of a game because of the speed of the game. Actually he helped us. Not only did he fit in but he made us better. We're very happy with that.”

Luca de la Torre agrees with Ramos. De La Torre, a Fulham midfielder, is a veteran of U.S. youth teams and has also made big plays so far at the World Cup—including a dramatic stoppage-time equalizer against Ecuador and an assist on Josh Sargent’s eventual winner against Senegal.

“He's a big guy but he's also very technical,” de la Torre said. “I would say he's a very well-rounded player. He can win the ball. He can keep the ball. He can pass forward. He gave us a bit of stability when he came in. It's not an easy thing to get thrown into a holding midfield position straight off the bench and do as well as he did. We're really happy for him.”

Jones nearly missed out on the U-20 World Cup. He only became a U.S. citizen last year but he also needed to obtain a waiver from FIFA for its residency requirements. Such waivers are frequently given when a player obtains citizenship via a naturalization process for non-soccer reasons, among many factors.

After Jones played in a U-20 camp last November, Ramos wanted to include him into his team for February’s World Cup qualifying tournament but FIFA did not grant Jones his waiver in time. Jones instead was glued to his television watching the team win CONCACAF. Eventually his waiver was granted two weeks before the World Cup.

And while Jones is now eligible to play on either side of the United States-Ghana soccer rivalry, it was not a hard decision for him.

“It was tough watching qualifying and not being able to play but I watched every game,” Jones told American Soccer Now from South Korea. “They won and they all worked hard for the championship. I was happy for them. To be honest. I didn't really know if FIFA was going to clear me in time. I went to a couple of camps with the guys and I was looking forward to it—if everything went through. I am very happy I got to be an American citizen and then play with these guys in a World Cup. It's something that I prayed for and now I am doing it. I am very happy.”

“Once I started the process, I knew I wanted to play for the United States,” Jones added on his newly acquired dual nationality. “I knew it as soon as I came here. It wasn't a hard decision for me.”

In South Korea, Jones has shown himself to be both skillful and raw. The big test following this tournament will be to continue to develop with the Philadelphia Union.

So far this season, Jones has made eight appearances (including five starts) with an improving Union team that has now won four in a row.

“He's a great talent that with his physical presence and technical ability could really turn some heads at the U-20 World Cup,” said U.S. national team and Union midfielder Alejandro Bedoya. “I've always been hard on him because after seeing him for the first time I saw so much potential. He has the ability to cover so much ground and is fearless but also has the ability to play balls forward under pressure and in between the lines that open up the game and lead to chances for the team.

"As you saw in the first game, he was able to change the game by being all over the midfield and helping to gain and keep possession. I wish him the best of luck and know he's got a bright future.”

Union coach Jim Curtin agrees with Bedoya that Jones has a tremendous upside.

"Derrick is a fearless player with the ability to rise to any occasion,” Curtin said. “Whether it is stepping onto the field for his MLS debut on the road in Vancouver, dealing with [Sebastian] Giovinco the following week, or coming off the bench in the 30th minute of a U-20 World Cup, he approaches the game the same way. He gives you an incredible ball-winner, with a great range of passing, and has very soft feet to get out of tight spots for a guy who is six-foot-four."

Before Jones returns to Philadelphia to resume his professional career, the spotlight will continue to grow on his U-20 team at the World Cup. On Sunday it will face Saudi Arabia (5am ET; FS1, Telemundo) and a win will give the Yanks a Group F title and a favorable draw in the Round of 16 knockout stage.

After the 2015 team earned accolades when it advanced to the quarterfinals, this team is aiming to go even further—and Jones is bullish on its chances.