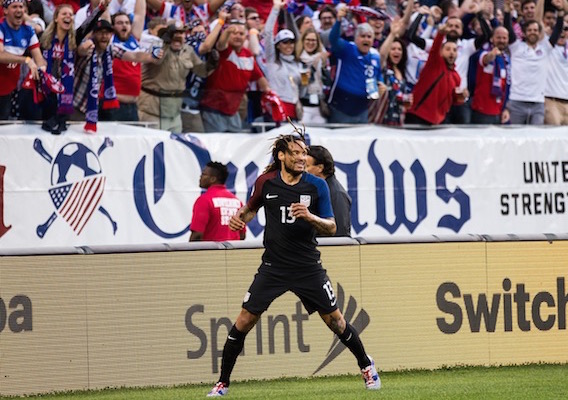 Two thirtysomething veterans, Clint Dempsey and Jermaine Jones, played with grit, skill, and determination as the Americans moved to the top of Group A. Here are Brian's player ratings.
BY Brian Sciaretta Posted
June 07, 2016
10:30 PM

FACED WITH ELIMINATION from Copa America Centenario, the United States national team put forth a clinical performance in Chicago against Costa Rica in a 4-0 rout, moving closer to a berth in the tournament quarterfinals. After a poor outing against Colombia, just about every U.S. player rose to the occasion in a crucial game.

Somewhat surprisingly, Jurgen Klinsmann used the same 11 players as he did in the opener against Colombia. After a shaky first five minutes, the U.S. team earned a penalty which Clint Dempsey converted. From there, the mentality of the team changed noticeabley. The pressure was lifted and the U.S. played with confidence and panache.

Here's how the players performed.

Brad Guzan: It was a relatively easy night for Guzan who was not seriously tested. He was there when the team needed him but overall did his job. Rating: 6

DeAndre Yedlin: The Seattle native rebounded well from his big mistake against Colombia to have a nice night. He delivered the cross that led to an opening penalty and was strong on both sides of the ball. Rating: 6.5

Geoff Cameron: The Stoke City central defender was part of a clean sheet victory and he did not make any of the mental mistakes that proved costly against Colombia. His passing out of the back was strong and it was a quality rebound performance. Offensively he forced a good save off a set piece in the 90th minute Rating: 6.5

John Brooks: It was a splendid night for Brooks. The Hertha Berlin stalwart helped absorb early pressure from Costa Rica and then was a rock in the backline—somebody who Costa Rica could not get behind for most of the game. He had a few weaker moments in the second half and drew a yellow card with a clumsy challenge. He was fortunate on an offside call where Ruiz beat him in the air for a header off the post. Rating: 7

Fabian Johnson: After being pinned in his defensive end against Colombia, Johnson was able to get forward against Costa Rica. He added another element to the U.S. attack, and was strong on the ball and difficult to defend when he pressed forward. Defensively, he was steady. Rating: 7

Alejandro Bedoya: While he did not get on the score sheet, Bedoya had a good game and worked well with both Jermaine Jones and Yedlin. He nearly registed an assist in the 74th minute although he probably should have shot rather than attempt a difficult pass. His work rate was impressive. Rating: 6

Michael Bradley: The captain was much improved from his opener against Colombia. He played a more withdrawn role, which suited him well. His passing was effective and surprisingly, his chemistry with Jones was positive. Rating: 6.5

Jermaine Jones: It was a monster performance from the Colorado Rapids midfield who not only scored a very impressive goal but was also a true midfield presence. He forced turnovers, made runs, worked extremely hard, and connected well with his teammates. He hit an incredible pass in the 74th minute to Bedoya on a very dangerous chance.  Rating: 7.5.

Gyasi Zardes: Zardes was one of the few Americans to have an off game. His first touch and decision making seemed to take the U.S. team out of its flow at times. He lost his man in the 83rd minute on a Costa Rican free kick that nearly resulted in a goal. He had some decent moments to get into dangerous positions but it was not a good outing. Rating: 4.5

Clint Dempsey: It was a game to remember for the Texan, who buried an important early penalty to set the tone of the game. He then assisted on the next two goals to have a hand in all three strikes in a brilliant first half. Rating: 8.5

Bobby Wood: The Hamburg forward was dangerous for a big portion of the 70 minutes he played. After a few sloppy plays in the early going he drew a penalty early to create the opening goal and then scored on an impressive strike before halftime to give his team a 3-0 advantage. Rating: 7

Graham Zusi: The Sporting Kansas City midfielder replaced Wood in the 70th minute and had a brilliant effort on his late goal. He did it all himself, forcing a turnover and moving into the box to finish with a strong left-footed shot. Rating: 6.5

Chris Wondolowski: After replacing Dempsey in the 78th minute, the game was in control. He made a nice run on Zusi’s goal to free up space for the shot, but otherwise did not have much to do. Rating: NR

Kyle Beckerman: The Real Salt Lake mainstay replaced Bedoya in the 83rd minute and helped the team finish off the game. His best moment came in his first play when he cleared a dangerous Costa Rica chance on a free kick. Rating: NR

Jurgen Klinsmann: The embattled head coach came into the game knowing that his boss, Sunil Gulati, made comments that suggested his job security was in doubt. In the end, there is little to fault in a 4-0 rout and his decision to remain with the same lineup from Colombia worked. Klinsmann  got big performances from his veterans, who carried the day. His central defense tandem of Brooks and Cameron looks reliable while Jones and Bradley performed well together. Rating: 7.

Those are Brian's ratings. Share your comments below and then create your own U.S. Player Ratings with our patented tool.