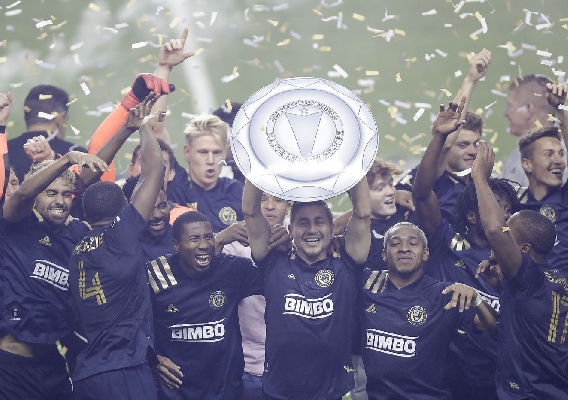 MLS will now shift focus to the post season following the international break. Decision Day was a lot of fun and ASN's Brian Sciaretta dissect the games with his thoughts and takes.
BY Brian Sciaretta Posted
November 09, 2020
4:05 AM

MLS DECISION DAY turned out to be pretty good. There were dramatics to resolve the Eastern Conference’s final playoff positions and others were vying for byes and homefield advantages. In the end, Philadelphia put to bed any questions over the Supporters Shield with a convincing performance.

The teams that missed out on the post season really can’t complain. The expanded playoffs this year saw teams qualify which really don’t deserve it. Those who didn’t make it need only to look at themselves in the mirror.

The West had no dramatics over who was in and who was out. It was all about seeding – and this year it means far less given the lack of crowds that will be present. Heading into the playoffs with momentum is a good thing as well although the international break should see the benefit of momentum negated as well.

The playoffs will be entirely unpredictable – unless Seattle and Toronto advance to the final again. Before we turn our attention completely to the playoffs, here are my thoughts on the season’s final day.

The Philadelphia Union had already qualified for the CONCACAF Champions League last week (due to rules on Canadian MLS teams in the tournament) but on Sunday were formally awarded the Shield with a convincing 2-0 win over New England.

With the pressure on, Philadelphia played a great game and that is a reflection of head coach Jim Curtin who has been building this team for years. Curtin made one big decision ahead of this game and that was to go with young homegrown Matt Freese in goal. With Andre Blake injured, Joe Bendik struggled last weekend in a loss to Columbus.

Philadelphia is less than 20 minutes from the Supporters Shield and its first-ever trophy pic.twitter.com/sHcTkKA4TM

Going with Freese was a big call. Over 90 minutes, Freese only had to make one save but the defense in front of him played with confidence in the young goalkeeper and he should continue to play as long as Blake is out.

Philadelphia does not have any true game-changing offensive forces. There is no Sebastian Giovinco, Miguel Almiron, Josef Martinez, or Nicolas Lodeiro on this roster. Instead, what you have is a confident bunch of young players mixed with competent veterans to build a team with no real weaknesses. The team believes in each other and has bought into Curtin’s system.

It has hard to predict that Philadelphia will win MLS Cup without Blake. Blake was a big part of everything the team did. The playoffs are also different due to the one-off nature. Sometimes it takes having an elite player or two to make magic in a close game.

Postgame tears from Brenden Aaronson who developed in the Union’s academy and will be heading to Austria after the season. It clearly means a lot to him to leave as a winner.

No matter what, Philadelphia clearly deserved this and this team was build with great foresight over the span of years.

You can also see how much this meant to the players on the team afterward. Brenden Aaronson will be heading to Austria after the season and he had tears in his eyes in the celebration. Andre Blake, with a splint on his arm, made an appearance in the postgame celebration and his teammates were very happy to see him – as he had surgery just days before. Mark McKenzie was also front and center of the celebrations.

Nashville earned a berth in the playoffs after proving to be a very difficult team to score against. The team makes very few mistakes and beating them requires a big effort from opponents. Walker Zimmerman will likely win the MLS Defender of the Year and that trade had huge impact on the league both in how it elevated an expansion team  - and humbled the 2019 Supporters Shield winners.

I like goal from Daniel Lovitz. Left-footed shot blocked, so he cracks it with his right from distance. #DecisionDay pic.twitter.com/yjzqsUyfiV

Moving forward, if Nashville can add more offense in later years, they will be a contender. For now, they are a team that should be able to pull off upsets. Having exceptional defensive organization is as good as having a top designated player in the playoffs. It’s a smart team that will be miserable to play against. They’ve exceeded all expectations in year one.

On a side note, Orlando City's Daryl Dike is a player U.S. Soccer should not want to lose to Nigeria. Also, Chris Muller should be a Best XI this season.

Daryl Dike, 20, is a player #USMNT fans should hope stays in the U.S system (his brother & sister played for Nigeria). Scores his 8th of the season to go with 4 assists. He has physical traits that are hard to replicate. Decent skill as well. Impressive pic.twitter.com/QQBKTzjLZ8

Los Angeles FC will not have the same level of expectations heading into the playoffs in 2020 as they did in 2019. That is to their benefit. As the seventh seed, expectations will be a lot lower. But much of the team’s struggles this year came with Carlos Vela being sidelined. The Mexican star is now healthy and on the field. With Rossi and Vela on the field, LAFC has the chance to outscore anyone.

The question will be defense – as it conceded 39 goals this year over 22 games. But against Portland on Sunday in a 1-1 draw, the defense was actually pretty good. To get to MLS Cup, it will need three straight wins over good teams.

Bob Bradley has the talent but has work to do over the next two weeks  in terms of preparation and hoping the team is 100% healthy.

Decision Day showed why Seattle is still a great team at this time of year  - a 4-1 win over San Jose with goals from Nicholas Lodeiro, Raul Ruidiaz, and Jordan Morris. When you have three players like that combined with competent (not exceptional) defending, solid role players, good coaching, and very good goalkeeping, you have a winning combination.

Seattle is not the top seed and has been prone to poor outings, but I think most people consider them the favorites to win MLS Cup again – and no one should argue with that.

American fans will want to note just how well U.S. U-20 playmaker Cole Bassett has played since MLS is Back – 5 goals and 5 assists. It is an exciting development but keeping that going into the playoffs will be a big test as opponents focus on stopping him.

The Red Bulls are a tough team to figure out. While it is fair for the normally pessimistic Red Bull fanbase to not expect much in the playoffs, the truth is that we don’t know. What defense will show up? The one that was excellent down the stretch against New England or Toronto on decision day (where it took a lead and bunkered well), or the one that was a hot mess against New York City FC?

As I mentioned last week, Brian White doesn’t score many goalazzos but he scores at a great rate: 15 goals & 2 assists in 2400 career minutes. Scrappy but effective player. They all count. #RBNY doing Philadelphia a HUGE favor pic.twitter.com/ZasUMobgF0

Aaron Long and Tim Parker remain a good central defense pairing. Also, for all the dismaying over the loss of Bradley Wright Phillips, Brian Wright has 15 goals and two assists in just under 2500 minutes in MLS. How well RBNY does in the playoffs will come down to central defense rising to the occasion. It is also going to have to hope Cristian Casseres can play well in defensive midfield as well as the typical veterans such as Daniel Royer and Kaku can play well and make big plays.

Columbus had its way with RBNY at the MLS is Back tournament but Columbus was on a roll in that tournament. The Red Bulls have changed managers and are in a better position now  - although the midseason acquisitions have been mostly duds so far.

NYCFC is a dark horse

While everyone is talking about Philadelphia, Toronto, Columbus, and even Orlando, some pundits have said NYCFC is a real contender in the playoffs. I agree.

This team can score goals in droves and is playing like a heavily motivated group. The team has scored 13 goals over its last four games and nine over its last two.

When looking at the standings, this team lost its first five games of the season. Since then, it has a 12-3-3 record – which makes it one of the best in the league. It has a lot of different ways to beat teams and the loss of Herber hasn’t affected it.

There is every reason to think that New York City can emerge from the East. The win over Chicago on decision day only reinforces that. Chicago rallied from a 3-1 deficit to even the game. NYCFC didn’t panic and deserved its 4-3 win. In the game before, conceding the opener to the Red Bulls did not bother Ronny Deila’s team as it calmly restored order in a 5-2 win.

Inter Miami heading to the playoffs

Yes, Inter Miami is heading to the playoffs. No, it doesn’t mean all that much given the playoff expansion this year.

Inter Miami is not as good as fellow expansion side Nashville either. Nashville looks to be on a firmer path forward given its building from the back forward. Miami has some interesting star power but has generally underwhelmed – and needed a close 2-1 win over a bad Cincinnati team along with loads of help to qualify for the playoffs.

We call that a GOLAZO-AZO-AZO!

Mikey Ambrose with a top class strike to give us the lead! #InterMiamiCF | #DecisionDay pic.twitter.com/Wgnd8l9xlx

It is hard to give Miami anything more than minimal chances in the playoffs but what does this mean moving forward? Does David Beckham and his staff believe it is really on the right track? Or does it consider this a gift and realize a lot of work needs to be done? If just making the playoffs convinces everyone the team is on the right path, it might have been better off if they didn’t make it.

That being said, they need to have a selling point to the picky Miami fan base.