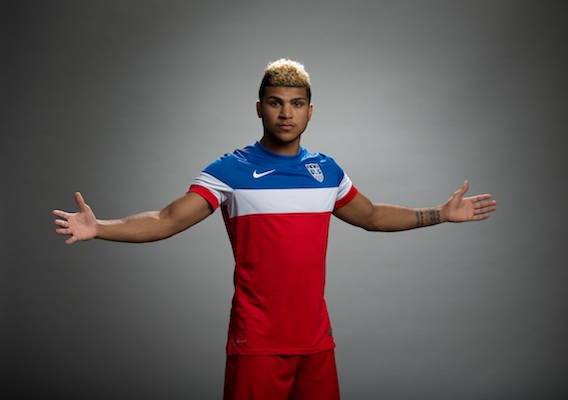 It's official: Seattle's 21-year-old right back is on his way to White Hart Lane (we're just not sure when). ASN's Blake Thomsen takes a look at the move, finding cause for both hope and worry in the process.
BY Blake Thomsen Posted
August 14, 2014
11:07 AM
THE WORST-KEPT SECRET in American soccer finally became official yesterday, as DeAndre Yedlin’s long-rumored move to Tottenham was formalized. Unsurprisingly, Taylor Twellman was the first to break the news, and Tottenham and the Sounders soon followed suit.

DeAndre Yedlin transfer Tottenham is done and finalized at $4 million. He will remain with Seattle for 2014 at least. #Sounders

We are delighted to announce that we have reached agreement with Seattle Sounders for the transfer of DeAndre Yedlin. pic.twitter.com/nfBTmI96Kv

OFFICIAL: Defender @yedlinny transferred to @SpursOfficial, will remain with #Sounders until end of 2014 @MLS season. http://t.co/erCrsOXPQt

What exactly Yedlin will do once Seattle’s season ends isn’t fully decided, but we’re guessing it will involve a further loan back to the Sounders for the start of the 2015 MLS campaign before he joins Spurs in the summer of 2015, perhaps post-Gold Cup. Let’s take a more detailed look at Yedlin’s future club situation.

Playing time is the most important consideration in any young athlete’s transfer destination, and there are several factors at work here. Tottenham’s starting right back is England international Kyle Walker, who has played virtually every league game when fit since the beginning of the 2011-12 season. Fellow right back Kyle Naughton is also still at the club, though most Spurs fans would be quick to assert that he is not up to Tottenham standards. Expect him to make way whenever Yedlin arrives in North London. While Naughton may not represent a huge roadblock for playing time, it’s hard to see Walker, just 24-years old, going anywhere anytime soon, both in terms of leaving the club and in leaving the starting lineup.

With that said, new Spurs manager Mauricio Pochettino is a noted proponent of player rotation, especially at fullback. Mere weeks after spending £10 million on left back Ben Davies, Pochettino signed incumbent left back Danny Rose to a five-year extension, thus suggesting he plans to extensively use both players. Further, Pochettino frequently rotated his two right backs—Calum Chambers and Nathaniel Clyne—last season at Southampton, and there’s no reason to think he won’t do it again at Spurs, though perhaps to a lesser degree. Tottenham is also a regular in European competition, so Europa/Champions League play—as well as the two English domestic cups—should provide plenty of opportunities for Yedlin. It’s highly unlikely that Yedlin will play more than Walker, especially early in his tenure at White Hart Lane, but there’s certainly room for 10-20 appearances per season in all competitions provided Yedlin continues his development.

Given Pochettino’s tactical leanings, it’s no coincidence that Spurs were heavily interested in Yedlin. Pochettino loves his pacey attacking fullbacks, and he deployed them to excellent effect at Southampton a season ago, where starters Clyne and Luke Shaw combined for seven league assists. So when he does get on the field, Yedlin should get the chance to showcase his considerable attacking abilities. We already know Yedlin can attack, though. U.S. fans (and Jurgen Klinsmann) would really like to see Yedlin improve his defense—this seems eminently possible at Spurs. First, he’ll be playing alongside some really good defenders, such as Jan Vertonghen and Younes Kaboul. Moreover, Pochettino is a strict tactician, and he won’t settle for the type of egregious ball watching that allowed Landon Donovan to score an easy tap-in last month.

For Now, Still a Sounder

As exciting as it is to picture Yedlin burning down the right flank at White Hart Lane, he still has (at least) a few months left with the Sounders. He’ll need to maintain a high level of performance with Seattle to maximize his chances of making an early impact at Tottenham. If he plays like he did in the World Cup—if we’re being honest, Tottenham executives had probably never heard of him before then—there’s a real chance he could come into Spurs preseason next summer as a serious contender for minutes. But if Yedlin doesn’t perform well, the worst-case scenario could see him loaned to a lower-division team in England, or perhaps back to Seattle next August. That wouldn’t be apocalyptic, but all involved would love to see him in and around the Tottenham first team come next season. What do you think about the Yedlin transfer? Is this too much too soon, or a perfect fit? Let us know in the comments section below. Blake Thomsen is a frequent ASN contributor. Follow him on Twitter.