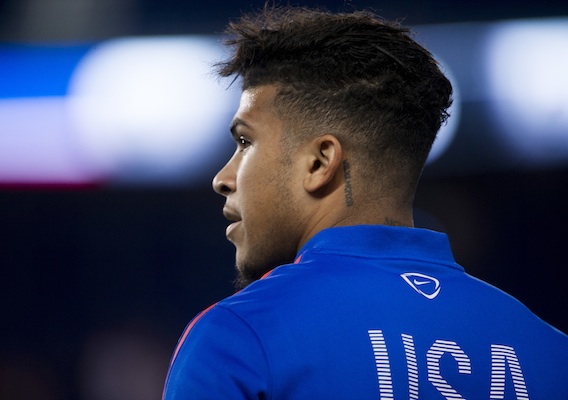 Apparently Fabian Johnson’s thigh injury wasn’t all that bad. The U.S. international started for Borussia Monchengladbach Saturday, raising questions about his standing within the U.S. national team.
BY Brian Sciaretta Posted
October 19, 2015
11:20 AM

Without a doubt the most intriguing individual in American soccer right now is Fabian Johnson, who was dismissed early from the U.S. men’s national team following its 3-2 loss to Mexico last week. Jurgen Klinsmann said Johnson asked out of the game in the 111th minute, even though Klinsmann believed the player was not injured. After the match, Klinsmann said he had a “very severe word” with Johnson.

When Johnson returned to his club, Borussia Monchengladbach tweeted that Johnson was being treated for a thigh injury and was doubtful for Saturday’s game against Eintracht Frankfurt. Klinsmann responded by saying that the real test would be whether or not Johnson played.

Lo and behold, Johnson did play against Frankfurt—he started and was very effective in a 90-minute effort, helping his team to a 5-1 road win. This does not necessarily mean that Johnson was completely uninjured, but it does seem to validate Klinsmann’s take on the situation.

Unfortunately, the situation has more questions than answers. Will Johnson return to the national team when World Cup qualifying begins next month? How do his teammates feel about his decision to beg out of the CONCACAF Cup?

If this were the only problem facing the national team right now, it wouldn’t be that big of a deal. But with the Americans playing so poorly now, Johnson is indispensable. Aside from being one of the most gifted players on the team, Johnson’s positional flexibility gives Klinsmann options at either fullback position and on the wing.

How this situation ultimately gets resolved is anyone’s guess at this point—but don’t be surprised if it lingers for quite some time.

In another unfortunate situation for Americans in Europe, forward Rubio Rubin will undergo surgery for a stress fracture on his foot, according to a Dutch website.

While a specific timetable is not known, the surgery likely means that Rubin, 19, will be out at least until the Eredivisie winter break ends for Utrecht on Jan. 17.

The Beaverton, Ore., native was part of the U.S. U-20 World Cup team over the summer, when he scored the game-winning goal against Colombia in the round of 16. He also participated in September’s U-23 camp but FC Utrecht did not release him for the recent Olympic qualifying tournament.

Yedlin gets nod at Sunderland

The good news: Sunderland’s new coach, Sam Allardyce, started Yedlin Saturday against West Bromwich, and former Seattle Sounder played the full 90. The bad news: Sunderland lost, 1-0, and remains in last place in the Premier League without a win to its name.

From a national team perspective, the success of Sunderland is secondary to Yedlin simply staying on the field and continuing to earn minutes. He is only at the club on loan, after all, and likely will not be at the team beyond this season. On Saturday, he looked solid but not spectacular.

The real issue resides with Allardyce and the tactics he wants to use. His teams have always been known for playing a style that emphasizes rough, physical play. Yedlin may not have a long time under Allardyce to prove himself, so he will have to make the most of every opportunity.

To find Americans scoring goals abroad these days, you have to go all the way to Eastern Europe.

Bjorn Maars Johnsen scored in the 83rd minute for Bulgarian leaders Litex Lovech in a 2-0 win over Montana. His powerful left-footed finish on a counterattack gave the visitors a two-goal cushion and helped maintain its place atop the standings.

In Ukraine, Eugene Starikov earned the start for FC Chornomorets and scored in the fourth minute of a 5-2 home win over another struggling team, Metalurh Zaporizhya. The win, Chornomorets’s first of the season, gave the club a four-point cushion over last-place Metalurh in a league where only the bottom team is relegated. Starikov, 26, has now scored two goals in four games since joining Chornomorets.

In the Bundesliga, John Brooks returned to the field for Hertha Berlin during stoppage time with the score tied 1-1 against Schalke. Unfortunately for Brooks and his team, Schalke scored the minute after he came on and Hertha lost 2-1.

Timothy Chandler also made his return from injury for Eintracht Frankfurt, coming on in the second half with his team trailing Borussia Monchengladbach 2-1. Things went from bad to worse from there, though, as Johnson and Monchengladbach cruised to a 5-1 romp.

Danny Williams came off the bench for Reading in its 1-0 win over Charlton, which moved the club into a tie for second place with Charlton and continued its strong push toward promotion to the Premier League.

Alejandro Bedoya is still recovering from the illness that forced him to miss the CONCACAF Cup; Gedion Zelalem did not play in Glasgow Rangers’ win; and Tim Ream did not dress for Fulham in its scoreless draw against Middlesbrough.