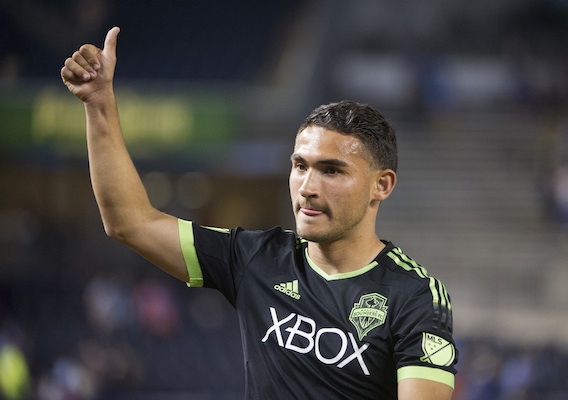 Cristian Roldan Pushing for Spot in the U20 World Cup

The 19-year-old Seattle Sounder is hoping that his strong start in MLS, along with a recommendation from coach Sigi Schmid, will earn him a spot on Tab Ramos' U-20 squad.
BY Brian Sciaretta Posted
May 05, 2015
11:45 AM

IT'S DECISION WEEK FOR TAB RAMOS, who is likely to unveil his U-20 World Cup roster in the next few days. The former U.S. international will have to make some difficult decisions to get to 21 names, and midfielder Cristian Roldan is one of the players looking to make a late push to book a trip to New Zealand.

Roldan, 19, has begun to earn minutes with the Seattle Sounders early in his rookie season. He has made two starts and six total appearances with a Seattle team many expect to be the best in MLS.

Despite lasting until the 16th overall pick at the 2015 MLS SuperDraft, Roldan is not exactly surprising people with his play. In 2013 he was named Gatorade National Player of the Year while at El Rancho High School in California. After his first season at the University of Washington, Roldan was named National Freshman of the Year by Soccer America and First Team All-Pac 12. After his sophomore season, Roldan elected to turn professional and sign a Generation Adidas contract with MLS.

Despite the accolades, Roldan hasn't prospered on the international stage. Ramos called him in for a U-20 camp in January 2014 but Roldan remained out of the picture until the team’s most recent camp.

For starters, Roldan looked sharp in his time with Seattle. But it didn't hurt that Seattle coach (and former U.S. U-20 head coach) Sigi Schmid called Ramos to recommend the Artesia, Calif., native.

“When a coach is behind you like that and has confidence in you, it definitely carries over to the player,” Roldan told American Soccer Now. “It affects the player in a good and positive way. Once I heard Sigi tell the media that and he also told me that privately, it touches your heart because this is a guy who wants what is best for me. He made a couple of calls and made it happen. But he’s made it happen for me at the club as well.

“[Sigi] told me he thinks I’m a good player, I deserve to be there, and that I’m a quality player. I’ve been under the radar quite a bit and he thinks that I deserve a little bit more than what I’ve been given.”

In Austria, Roldan played the final 15 minutes of the U.S. U-20 team’s 2-2 draw against Qatar. He started and played 75 minutes in the team’s 1-0 win over Croatia. Overall he felt he played well and is adamant that he is a much better player now than he was during his first U-20 camp 16 months ago.

He attributes a lot of his growth to the Sounders.

“I think I’ve learned a lot in the past couple of months,” Roldan said. "The veteran guys at Seattle have helped me to adjust and get comfortable. They have taken me under their wing and have helped me grow as player and as a person.

"You have to be mentally prepared for every practice and every game. You have to be ready for everything going on. It’s a tribute to them and the coaching staff, for sure.”

Seattle is off to a strong start this season with 16 points through eight games and an MLS-leading goal differential of plus seven. Following the camp in Austria, Roldan has rejoined Seattle and was a second-half substitute in Sunday’s 3-1 win over New York City FC.

Given the number of established and/or high-profile players on the Sounders—including Clint Dempsey, Obafemi Martins, Marco Pappa, Osvaldo Alonso, Lamar Neagle—Roldan understands that minutes are going to be hard to come by. But he also knows there are benefits to playing alongside some of the best players in the league.

“You have to take into account that you practice with these guys and you get that experience with them, he said. "I’ve played in a couple of games now and I have realized that practices are just about as hard as these games because you’re playing against these first-team guys. They have been in the league for a very long time and are very good.”

Alonso is one of Seattle’s most effective midfielders and is one of the team’s three designated players. He has served as a mentor to Roldan and is very enthusiastic about Roldan's future both with Seattle and the United States

“He’s got a lot of potential,” Alonso said. “He’s young. He can be one of the best players here if he wants. I speak with him and tell him, ‘You’re young. You can improve yourself every single game. Train hard and show it in the game.’ He’s a good guy. I like being around him. Now on the U-20 team, he’ll show what he can do. He’s fast and he’s a good player. He can play at a high level.”

Roldan comes from a family that has strong soccer ties. He was born in Artesia, Calif., to parents from El Salvador and Guatemala. His uncle and cousin were former professionals with CD FAS, one of El Salvador’s most successful clubs. Both are retired now but have continued to serve as mentors to Roldan, and his uncle, a Dallas resident, attended Roldan’s first career start against FC Dallas.

Roldan, a Barcelona fan, enjoys playing with the ball on the ground and making smart, possession-oriented passes. He is versatile across the midfield and often played the No. 10 role, a playmaker, but Seattle uses him in a more withdrawn position.

Growing up in Southern California, Roldan’s parents spoke English around the house to help their son assimilate to American culture. Roldan, a strong student, was recognized by his congresswoman, Linda Sanchez in Washington, D.C., for his athletic and academic achievements.

As he blossomed into a soccer talent, Roldan's parents hoped that he would play for the United States internationally rather than their respective native countries. Representing the U.S. in the upcoming U-20 World Cup in New Zealand would be a huge honor for the entire clan.

Roldan knows competition will be intense for a roster spot since he will be competing with fellow central midfielders Emerson Hyndman, Russell Canouse, Kellyn Acosta, Joel Sonora, Junior Flores, and maybe even Gedion Zelalem. But that has only served to motivate him more.

“The World Cup is always on your mind when you’re in this age group and you know guys on the team,” Roldan said. “But you try not to let that affect you. You try to keep playing well and do everything to help your team and to help yourself improve.

"It crosses your mind but I’m not going to be disappointed to the point where it makes me a worse player if I don’t make the team. It’s only going to make me better.”