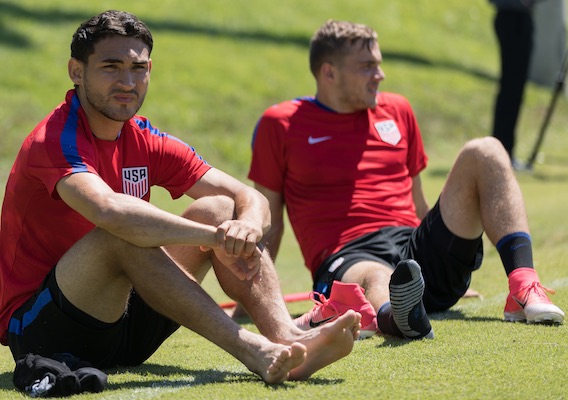 Cristian Roldan on Call-Up: 'It Is Such a Huge Honor'

The 22-year-old midfielder made a huge leap forward in 2016, establishing himself as an MLS starter and winning MLS Cup. Now he is getting his first shot with the full U.S. men's national team.
BY Brian Sciaretta Posted
June 28, 2017
12:00 PM

BY MOST ACCOUNTS, 2016 was a breakout season for Cristian Roldan. The California native established himself as a consistent starter for the Seattle Sounders where he fit perfectly into a lineup alongside noted internationals like Nicolas Lodeiro and Clint Dempsey. In his final game of the year, Roldan lifted MLS Cup.

But while his club career was chugging along, Roldan’s international career was stuck in neutral. There were rumors that the national teams of his parents’ native countries, El Salvador and Guatemala, were interested in him but Roldan was hoping for a call from the United States.

Even after winning the championship, new U.S. boss Bruce Arena did not select Roldan for the federation's annual January camp. Despite the setback, Roldan continued to push forward with the Sounders where he has been given more responsibility on the field. Seattle has struggled so far this season but Roldan has been among the team’s better players.

That progression was not lost on Arena who formally named Roldan to the 2017 Gold Cup team on Sunday.

“I was just hoping it was coming,” Roldan told American Soccer Now last week from Seattle. “I was hoping I was going to get called up to January camp but that kind of stuff you have no control over. What you can control is playing well. So my focus was on the Sounders and hopefully everything would fall into place with the national team.

Roldan is fully aware of the opportunity in front of him. For the first time in years neither Michael Bradley nor Jermaine Jones is on the U.S. national team roster for a major tournament. That creates a rare chance for Roldan and the other central midfielders to impress the national team staff.

It is also an event that will formally cap-tie him to the United States internationally. Roldan has connections to both Guatemala and El Salvador—his cousin even played for CD FAS, one of El Salvador’s biggest teams. But Roldan views becoming cap-tied to the U.S. as an honor, saying that it “narrows your focus down because you are cap-tied for one team and now you're focused on playing well for your club and the one country you represent.”

Roldan’s goals are clear: He wants to lift the Gold Cup and make a case to be a bigger part of the U.S. national team as September and October World Cup qualifiers approach.

“First impressions are extremely good for your career,” Roldan said. “I do believe that if you go in, show you're capable of being there, and showcase your talents then that can go a long way and catapult your international career. Hopefully I can do so.

"I want to go in and be sharp and clean to make an impact. I'll do any part I can for the team and the Gold Cup. I want to be a bigger part of the national team and the international stage. It is one step at a time and that starts being sharp on the ball and being sharp mentally.”

The competition in central midfield is considerable. Roldan is one of four central midfielders on the team and the other three all have formidable resumes. Kellyn Acosta is now one of the best midfielders in MLS and Arena gave him a start in a World Cup qualifier in Mexico City. Dax McCarty has helped revitalize the Chicago Fire which now have the second best record in MLS. Joe Corona was a steady presence with Club Tijuana, the Liga MX side that finished the 2017 Clasurua with the best regular season record.

Roldan’s numbers are also impressive. In 2016 he played more than 3,500 minutes for the MLS champions. Barely 22, he has made 93 first-team appearances with the Sounders and continues to improve.

“I think tactical awareness is probably the No. 1 thing I've noticed that he's gotten much better at,” Seattle head coach Brian Schmetzer said. “When he first came to us, he had a good engine—a solid player. But just his tactical acumen was maybe not up to quite the level in his rookie season. Now, his third year in, it's really high.”

Off the field Roldan has matured as a professional, making a transition from a prospect to an established player. Part of that is learning by example. He watches Lodeiro go to the gym every day and staying late after practice. He observes how Dempsey takes care of his body to extend his career. In practice, Roldan notes that defending those players is “no joke.”

“I think for the second season it has been a little different because players know how you play,” Roldan explained. “Teams know how you play specifically and they also know your weak points. In terms of adjusting or maybe changing a little bit of your game, that has been the biggest difference. This year I have been shifting to center-mid and last year I was on the right wing and center-mid sometimes.

"My passing ability, playing through pressure and being able to play penetrating balls—that is a part of the game where I have adjusted and improved. I feel like I was pretty strong in the sense of defensive responsibilities and tactically I knew where I needed to be. But on the ball, I needed to be a little bit better and I feel like I improved quite a bit.”

Roldan is one of the few younger players on the national team who took the once-traditional route of playing high school soccer, advancing to college, and then moving on to MLS.

Despite winning the 2013 Gatorade National Player of the Year while playing for El Rancho High School in Pico Rivera, California, he has not received the accolades many other top players of his generation have had. He was cut by the 2015 U-20 team and fell to the 16th overall pick in the 2015 MLS draft.

But with an MLS Cup already in his past and the Gold Cup ahead, Roldan couldn’t be happier with his choices.

“It was certainly challenging,” Roldan said. “I do feel at times I was overlooked. But that is the beauty of soccer and becoming a professional. We all have different stories. Maybe my story is being a bit overlooked and overcoming that stage while trying to better myself. I am happy with it. I think it just adds motivation.

"Up to this point, I've been very pleased with my career and happy with how things have ended up. But there is always time, and effort, for improvement.”