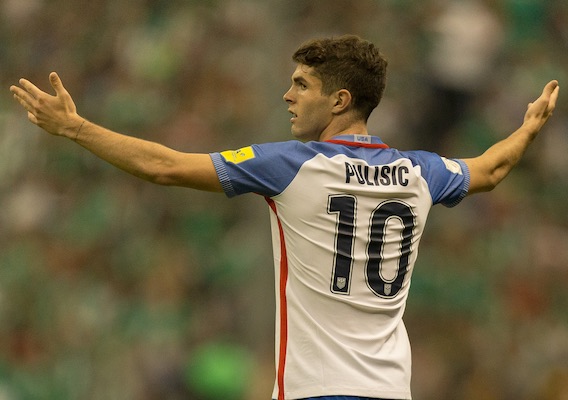 Could the U.S. Men Win the 2020 Olympics? Absolutely

The U.S. men's national team has not shined on the Olympic stage in recent years but that could change in 2020, says American Soccer Now columnist Brian Sciaretta. The stars are aligning for the Yanks.
BY Brian Sciaretta Posted
August 23, 2017
10:00 AM

RIGHT NOW there are a number of young American players breaking through on the domestic front, in Europe, and in Mexico. It starts with Christian Pulisic but it does not end with the Borussia Dortmund star. While the 2018 World Cup might come too soon for many of the players listed here, the 2020 Olympic could be revealing and if things break the right way, the U.S could medal in Tokyo.

Olympic soccer has been bitter for American fans given the failure of the team to qualify for three of the last four tournaments. And while the importance of Olympic soccer on the men’s side varies, it is still taken seriously by enough federations to be prestigious. South America, CONCACAF, Africa, Asia, and enough of Europe view the tournament favorably.

Most importantly, Americans take the Olympics seriously and success in this tournament is significant achievement for the sport. Fortunately for the U.S. men's national team, a number of things are breaking its way.

Before we look at what a prospective roster, here are some important points to consider.

First, the most talented American prospects are going to be hitting the older side of the U-23 age limit. The Olympics is on a four-year cycle. Inside of that four-year cycle, there are two U-20 cycles that generally feed into the Olympic team.

The older U-20 cycle from the 2020 Olympic team will come from the 2017 U-20 team and that is a very strong base of talent. That team advanced to the quarterfinals of the U-20 World Cup despite missing several top players.

A second important point to consider is getting players released. The likelihood of European clubs releasing all top players is always low. But consider that for Tokyo, the last time the Olympic games were held as early in the summer was Atlanta in 1996. In 2020, the opening ceremonies will begin on July 24 and will be over by August 9. Unlike the last several games, Tokyo will likely only conflict with European preseason, not the actually season.

The roster size for the Olympics is smaller than any other tournament with group stages followed by knockouts. With just 18 players, versatility is an enormous factor to consider. Fortunately for the U.S., many of its younger players are competent in second or third positions (Tyler Adams at right back, Erik Palmer-Brown at defensive midfield, etc).

If the Yanks were to get everyone it wanted, the amount of talent is impressive. That considers just the age-eligible talent too and does not factor in any of the three-allowable overage possibilities or any dual-nationals like Timothy Tillman who are playing for other countries.

A lot can and will change over the next three years, but here is what the sketchboard looks like right now.

In a position that always gets replaced by an overage player for the Olympics, Brady Scott looks to be the best age-eligible player at the moment as the likely No. 1 for the 2019 U-20 team.

Defense is both one of the team’s strengths and weaknesses. Central defense is pretty loaded with Carter-Vickers, Glad, and Palmer-Brown all top players despite Glad being the only player at the moment earning consistent playing time. That will change over the next year.

Fullbacks, however, are extremely thin with no age-eligible player standing out right now. Surely the next U-23 coach will have to consider at least one overage player for a fullback spot. In the big picture, the lack of quality fullbacks on U.S. youth national teams should be concern for U.S. Soccer and its fans.

In this case, you have Matthew Olusunde, Marco Farfan, and Danny Acosta and with none having played much professionally  it is uncertain when or if they will become starting players. The door is currently wide open to any player (even off the radar) who breaks through over the years ahead. It is also possible that Tyler Adams will see time at right back if the position is still thin when qualifying rolls around. This is the weakest area of the field for this team.

This is the strength of this age group. Pulisic is the difference between being a medal favorite and a better-than-average team. But even without the Borussia Dortmund star, Weston McKennie, Adams, and Jonathan Gonzalez are all in good situations playing regularly for their clubs right now.

In a 4-3-3 or a 4-2-3-1, there is a strong emphasis on central midfielders and playmakers. Pulisic has the playmaking job with Pomykol as his backup. The wingers on this roster are young and unproven with Brooks Lennon, Nick Taitague, and Andrew Carleton the top candidates. Taitague and Carleton in particular are prospects at the moment but have a high ceiling and the potential to be difference-makers three years from now.

Josh Sargent sealed this job with a very strong U-20 World Cup—a performance that likely secured a potential move to Werder Bremen. Haji Wright should see playing time on loan with Sandhausen despite not playing much for the U-20 team.

This team is likely going to play with a single striker formation so a large number of forwards is unnecessary.

With everyone available, this team has the strongest-ever core of any U.S. Olympic team. Sargent, Pulisic, Adams, Palmer-Brown, and Carter-Vickers would be an amazing foundation now, let alone three years out. Of course this list is also very optimistic on the development of Pomykol, Carleton, and Taitague but they remain top prospects despite a lack of first-team minutes so far. And this prospective roster does not factor in any players who emerge quickly in the next three years. This includes players in foreign or domestic academies, college, or the USL.

Like in years past, most top players in Europe won’t be there for qualifying but the 2017 U-20 team won CONCACAF championship without Pulisic, McKennie, Wright, Taitague, and Carter-Vickers. Plus the current U-17 team also has dominated CONCACAF throughout the cycle. This team has more depth than ever before and should be able to qualify even without key players.

But the top question is knowing what we know right now whether this team can win the gold medal, or any other medal, at the Olympics?

If the team gets its players, the gold medal is within reach. The 2017 U-20 team could have won the World Cup if Tab Ramos had his best players. It wouldn’t surprise anyone if the 2017 U-17  team went far at the World Cup this fall. So expectations should be high for the U-23s.

Of course the U.S. will need to overcome its shortcomings at fullback and the current group of goalkeepers is still young and inexperienced. That problem, however, can be fixed with overage players. U.S. Soccer has always used one of its three overage spots on a goalkeeper and that should continue in 2020.

Youth teams are rarely well-rounded and typically always have holes since age groups have different strengths and weaknesses. That is the case here but this team is strong at the most important areas up the middle of the field. Within three years, the U-23 central midfield, playmaking, and central defense roles will feature seasoned veterans.

There are a lot of “ifs” but if the right players are allowed to play, this team has the talent to win the gold.

We'd love to hear your take on Brian's look ahead to the 2020 Olympics. Share your thoughts in the Comments section below.