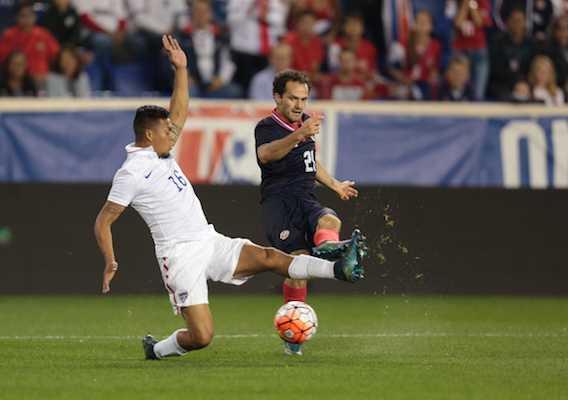 Jurgen Klinsmann and the Stars and Stripes couldn't find a result against the visitors at Red Bull Arena, falling 1-0 in front of the smallest crowd since 2010. Joel Campbell scored the winner.
BY Noah Davis Posted
October 13, 2015
9:00 PM

HARRISON, NJ—After a crushing loss to Mexico in Saturday's CONCACAF Cup, the United States men's national team entered Tuesday's match against Costa Rica in desperate need of a victory. In Costa Rica, another squad that has struggled since overachieving at the World Cup in Brazil, the Amercans had a potential salve.

They didn't find it as a second-half goal from Joel Campbell was the difference. The Americans have now lost three straight in the U.S. for the first time since 1997.

It took less than 90 seconds for the U.S. to earn their first chance. Costa Rica brought down Danny Williams 30 yards from goal. A strong start for sure, but Brek Shea's free kick went sailing harmlessly over Kaylor Navas' net.

Tim Howard, returning to his home state, started in net for the first time since his record-setting performance against Belgium during the 2014 World Cup. In the fifth minute, he made his first save of the calendar year for the red, white, and blue on Marcos Urena's weak effort.

For the next quarter hour, the teams traded stretches of possession—the U.S. having more—but neither side created any real chances. Guatemalan referee Walter Lopez called the early stages tightly, whistling frequent fouls and showing Costa Rica's Johnny Acosta a yellow in the 18th minute. Jermaine Jones' free kick curled elegantly into the box but failed to find a friendly head.

In the 29th minute, the American Outlaws began chanting, "USA ain't nothing to f*ck with," a sentiment that, to that point in the match, had not been remotely true. Seconds later, Shea hit a free kick into the box that left back Tim Ream headed goalward, only to see Navas make a save due to his excellent positioning.

Were the Americans inspired by profanity? Who knows!

Another half-chance came in the 42nd minute when Ream sent in a cross after a nice spell of passing. The attempt flew over Jozy Altidore but found DeAndre Yedlin. He managed to hold off his defender and appeared to have time to trap the ball but instead attempted a difficult half volley with his off-foot. After a couple bonces, Navas picked up the slow shot.

Costa Rica's best moment of the opening stanza came on the ensuing possession. A low ball across the box reached Johan Venegas. Brad Evans, not having his strongest performance, kept the score at zero with a sliding defense.

Exactly 45 minutes after the start, Lopez blew his whistle to signal the end of the first stanza.

Costa Rica should have scored in the early stages. Michael Orozco misplayed a bouncing chip from Joel Campbell, which allowed Urena in on Howard. His effort, pressured by a rapidly closing Alvarado, went wide.

Yedlin picked up a yellow card in the 56th minute. After his bad touch led the ball go out of bounds, a quick throw-in caught the midfielder behind the play. He caught up—obviously; he's very fast—but choose to pull the Costa Rican down, leaving Lopez with no choice but to go to his pocket.

As the Outlaws chanted "When the Saints Go Marching in," Jonathan Spector came on for Ream, who played well in his return to Red Bull Arena. On the sideline, U.S. head coach greeted his left back with a handshake, a smile, and a big compliment.

In the 68th minute, the visitors should have scored again. Urena, however, missed. The third time was not the charm.

Moments later, a breakthrough. Substitute Dave Myrie found himself with space and drove down the right channel. He sent a low cross back close to the penalty spot where Campbell met it. As Williams watched from a step or two behind the attacker, the shot scooted to Howard's right and into the side netting.

After the goal, Klinsmann made his final moves. Lee Nguyen and Andrew Wooten on; Shea and Gyasi Zardes off.

Costa Rica continued their ascendency, but Evans kept the deficit at one with another sliding save in the 77th.

In the 85th minute, Evans overhit a cross. The 9,214 fans in attendance booed. In Utah, Jerome Kiesewetter scored to put the U.S. U-23 team up 2-0 in its third-place match against Canada. That was the only relief that would be forthcoming.