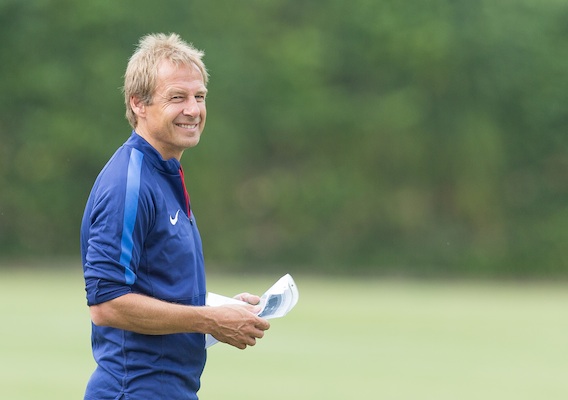 Confident or Just Stubborn? Jurgen Sticks to His Guns

The 2015 Gold Cup was an unmitigated disaster for the U.S. men's national team, but Jurgen Klinsmann just announced another roster featuring most of the same players who failed in that tournament.
BY Brian Sciaretta Posted
September 01, 2015
10:00 AM

FIFTEEN OF THE 23 PLAYERS named to Jurgen Klinsmann's roster for Friday's friendly against Peru were also on the U.S. side that finished fourth in the 2015 Gold Cup. Two others from that underachieving team, Clint Dempsey and Michael Bradley, will join the Americans for Tuesday's clash with Brazil.

In other words, the U.S. men's head coach and technical director is standing by the decisions he made this summer.

OK, then. Here are my thoughts on the roster.

Beyond the question of whether these are even the best available American players, many called into the team not playing well for their clubs—or simply not playing at all.

Midfielder Joe Corona has been substituted out of three straight Liga MX games due to form. Greg Garza has been struggling for Atlas and was not part of the matchday 18 last weekend. Mix Diskerud is not playing well for New York City FC and Tottenham's DeAndre Yedlin is still not playing at all as he awaits a potential loan deal. William Yarbrough is the backup at Club Leon and Michael Orozco has not stood out at Club Tijuana.

Shortly after Klinsmann was hired in 2011, he had this to say ahead of a friendly against Ecuador:

“I sent a message in my first get-together for the Mexico game and I said for me the most important thing for you guys is that you play,” Klinsmann said. “If you’re on the bench somewhere, it doesn’t matter in Europe or in MLS, or in Mexico, you have a problem coming in here. And so that is very important for the players to know. First comes the rhythm with their club team and then we pick them up from that rhythm.”

Apparently, things have changed. Klinsmann says he emphasizes competition for positions on the field but too many players simply earn their call-ups regardless of form or playing time. Part of the reason could be that the player pool is simply not very deep at the moment. There are not a lot options outside of this core that Klinsmann feels particularly comfortable using.

Of the 26 players who are part of the roster or who will be added later, only Greg Garza, Gyasi Zardes, William Yarbrough, Andrew Wooten, and Ventura Alvarado earned their first caps after the 2014 World Cup. In addition, 21 of the 26 players were all part of either the 2015 Gold Cup or 2014 World Cup teams. When going back to the 2013 Gold Cup or World Cup qualifying, just about everyone on this roster has played in a major tournament. Only Wooten and Bobby Wood have never played for the U.S. team in anything more than a friendly.

Is the annual January camp the only time when an MLS player can integrate himself into this team? To this day, Alan Gordon is the only MLS player to make his U.S. national team debut under Klinsmann outside of a January camp friendly. When injuries and poor form hit the national team like they have now, it tests a coach’s personnel decisions, and for Klinsmann the player pool appears to be extraordinarily shallow.

Where is the Speed and Width?

This national team roster lacks speed and players who can thrive out wide.

The backline in particular is very limited. Seven players—John Brooks, Geoff Cameron, Tim Ream, Michael Orozco, Matt Besler, Ventura Alvarado, and Omar Gonzalez—are natural central defenders. Calling in that many central defenders is an overkill unless Klinsmann is going to look to playing some of them in different positions. Tim Ream can play left back while Michael Orozco and Geoff Cameron can play on the right. Will the lack of a true fullback hurt?

On the wings, Gyasi Zardes and Alejandro Bedoya will likely feature out wide but it is an open question if that is their best position since Bedoya often plays centrally for Nantes and Zardes has had his best success for the Galaxy up top. Yedlin has been used as a winger but he played right back throughout his youth career.

This roster suggests that Klinsmann's game plan involves pushing up the middle—and it's highly unlikely that speed will be used as a weapon.

Benny Feilhaber was left off the team yet again despite a marvelous season for Sporting Kansas City. In July Klinsmann was blunt when he said there were simply other people ahead of Feilhaber at the moment. But with Diskerud and Corona struggling badly at the club level, leaving Feilhaber off the roster is a definitive statement: Klinsmann just doesn't rate him.

Similarly, Jonathan Spector and Eric Lichaj are natural fullbacks who are thriving in the English Championship. Given the number of injuries to regulars like DaMarcus Beasley, Fabian Johnson, and Timothy Chandler, it's clear that Klinsmann doesn't think much of either player. Naming seven central defenders to this squad at the expense of two players who are team leaders in England is a bizarre call.

Several MLS players who are in terrific form right now deserved consideration but did not receive a call: The speedy, combative winger Sebastian Lletget has emerged as a big part of the Los Angeles Galaxy attack; Ethan Finlay is having a terrific season and leads the league in assists; and Matt Hedges is one of the best central defenders in MLS.

None of them will get a chance to prove themselves ahead of October's crucial clash with Mexico.

Klinsmann is taking a gamble. If the U.S. team wins against Mexico, he looks like a genius for being so confident in his core and not making changes to his established hierarchy. If, however, the team comes up short against El Tri, Klinsmann will face intense criticism for being rigid in the wake of a warning sign like the 2015 Gold Cup.
Brian Sciaretta is an American Soccer Now columnist and an ASN 100 panelist. Follow him on Twitter.