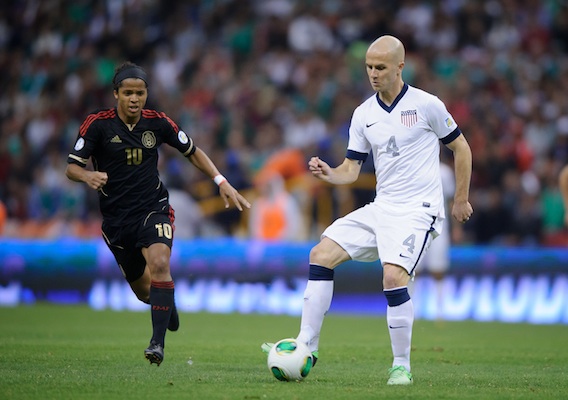 ASN's CONCACAF Best 11: Our Pick for Every Position

The CONCACAF region ranges from the Arctic Circle to the Darien Gap. Not surprisingly, there are a few talented soccer players to be found here, and we've assembled the best 11 based on current form.
BY Jon Arnold Posted
June 25, 2013
11:58 AM
JUST PAST THE MIDWAY point of the Hexagonal round of World Cup qualification and a few days before the Gold Cup begins, we had a thought: Who are the best players in the CONCACAF region right this second? Not based on reputation, not based on history, not based on anything other than current form. In other words, if we wanted to pick an All-Star team from CONCACAF that would face off against the All-Star teams from other regions around the globe—tomorrow—who would we take? Here's where we landed.

There’s almost a case to be made for Brad Guzan, but Howard has been between the sticks for the U.S. for the tremendous month of June and hasn’t done anything that would indicate he’ll lose that spot come September. Should Howard falter at all, the region certainly has a wealth of talent at the back.

You recently saw the Celtic star defending well for los Catrachos against the U.S., but he was also one of the best players for el Bicolor when they were moving forward for the equalizer. There’s a reason Celtic fans were so disappointed when the left back went down with an injury before a crucial Champions League tie, and it’s because the injury-prone Izaguirre is an elite fullback when he’s on the pitch. He’s healthy right now, so he’s in the line-up.

Panama hasn’t had the best time in the Hex, but it’s not because of Baloy. The hulking Santos man has done what he can to keep opponents off the board. Baloy’s exactly the kind of center back we want for this CONCACAF team, especially with an undersized center back next to him.

The Ticos haven’t given up a goal since the Snow Bowl in Denver, and Gonzalez has been in central defense for all the qualifiers. At 6’1”, Gonzalez also plays defensive midfielder, but both club and country have utilized him on the back line to pleasing effect.

Um, pass? Let’s just say Jurgen Klinsmann isn’t the only one without a stud at right back for the time being. We’re going to go ahead and continue the Costa Rica love and give this one to Gamboa because our editor says we can’t acquire the rights to a picture of The Riddler. Gamboa, Mix Diskerud’s club teammate at Rosenborg, gets a win by default as another part of Costa Rica’s sterling back line.

While living in Rome might suggest otherwise, Michael Bradley isn’t the most glamorous player going in CONCACAF right now, but he might be the most important. It’s a rare occasion to see him play the wrong pass, and his ability going forward has been on showcase as well during the Hex.

Like Bradley, Espinoza has tenacity in abundance and has proved he belongs on the international stage not just in CONCACAF. Espinoza came into international prominence with his performance in a 3-2 loss to Brazil in the Olympics.

One of the few bright spots for Mexico at the Confederations Cup, dos Santos can do it all on the field and has for Mallorca and El Tri. He’s in search of a new club after he couldn’t salvage another season in La Liga, but with the speed and skill he brings he shouldn’t have any trouble finding a few takers.

Clint Dempsey’s former Fulham teammate gets the nod over Dempsey because of his better form in the June qualifiers. While Dempsey had a quiet month by his standards, Ruiz was crucial for Costa Rica, scoring a set piece goal and providing the pass for a goal from the run of play against Panama.

You can’t talk about in-form players without talking about Altidore. The AZ forward seems to have shaken off any issues with getting goals for the national team after putting in four in the last four matches. He continues to build consistency and prove he’s one of the region’s best players.

Hernandez didn’t score in any of El Tri’s June qualifiers, but it’s hard to fault him too much for the scoring drought. He had both goals for Mexico in San Pedro Sula and scored three times in the Confederations Cup.


10 players who just missed the cut: