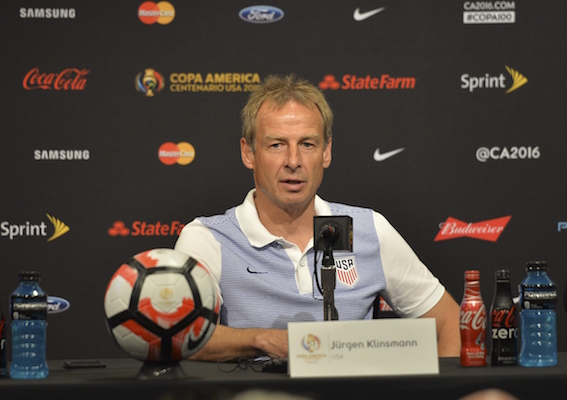 Colombia Was in Control, Despite What You Heard

Forget the spin—the U.S. men's national team got thumped Friday night in Santa Clara, Calif. Colombia scored early, sat back, and let the Americans knock the ball around in the middle of the field. Full stop.
BY Brian Sciaretta Posted
June 04, 2016
4:00 AM

IN THE WAKE of Friday's 2-0 loss to Colombia to open the Copa America Centenario tournament, the United States must now win against Costa Rica if it hopes to advance out of Group A.

Pre-tournament optimism was plentiful heading into this game but the team's performance, not just the loss, against Colombia was simply not good enough for a host nation that had a stated goal of a making the semifinals. Before the Costa Rica match, Jurgen Klinsmann will have examine what went wrong and decide if changes to the starting lineup and formation are needed.

From the opening whistle, the U.S. team was outclassed by Colombia. Colombia is a better team than the United States and a loss, in theory, doesn’t mean the U.S. necessarily played poorly. In this case, the U.S should feel disappointed.

Form an offensive standpoint, Klinsmann’s team was just completely ineffective. With the exception of the corner kick in the 60th minute, where Clint Dempsey nearly scored, the American set pieces were poor. From the run of play, it was even worse. There was little combination work or creativity the yielded any meaningful scoring opportunities.

John Brooks had a good game for the Yanks but every other player is capable of playing—high-quality opposition notwithstanding. The basics weren’t there. Possession was given away meaninglessly, crosses were mishit, and players were not in synch.

In its first game of a huge tournament, at home, the U.S. came out flat and timid.

2. Colombia was always in control

After the visitors scored the opening goal, the U.S. enjoyed some possession—but Colombia was always in control of this game. Colombia sat back and allowed the U.S. team to knock the ball around far from the goal (often in its own half) and then easily absorbed any type of pressure the U.S. mustered.

Jose Pekerman’s team relied on the Americans' inability to attack and instead played to counter. Then, in the second half, Colombia held the ball and forced the U.S. to chase the game. The bottom line is that Colombia did whatever it wanted and the U.S. had no real answer or plan to get on the scoreboard.

In the postgame press conference, Klinsmann said he believed the game was even, outside of penalty call. That doesn’t seem to be the case. To make matters worse for Klinsmann, Colombia did not even play that well. Its counter attacks can often be lethal and that wasn’t the case, despite rattling the crossbar in the second half on a counter.

Costa Rica and Paraguay are not even close to being as good as Colombia but this loss was disheartening and reversing momentum on just a few short days of rest is going to be a challenge.

In friendlies against Ecuador and Bolivia, the United States opened the game in a 4-3-3 formation and it did the same against Colombia. While it seemed to work in the friendlies, against Colombia its limitations were exposed.

In the midfield, the 4-3-3 really makes Bradley absolutely crucial to the Yanks' uccess. If Bradley is having a poor game, like he did against Colombia, the U.S. is also going to struggle.

Jones and Bradley have rarely played well together and in this game they were both subpar. When those two are both off, connecting the ball into attacking positions is remarkably difficult and that is enhanced when the front line isn’t built for a 4-3-3.

It is an interesting question if Klinsmann has a “plan B” formation for the Copa America. If he does, why hasn’t it been tried yet?

In recent friendlies against Ecuador and Bolivia, the U.S. looked very good and seemed prepared for this tournament. Against Colombia, the wheels came off.

This isn’t the first time something like this has happened. Last summer, about a month before the Gold Cup, the Americans defeated Germany and the Netherlands—on the road, no less. Then, at the Gold Cup, the U.S. was outshot by most CONCACAF opponents before limping to a fourth-place finish.

It's unclear why this is the case. Does the team get lured into a false sense of confidence after friendlies? Does the team play friendlies and tournaments with the same intensity level?

The difference between the confidence it displays in friendlies and in real tournaments is night and day.

Next year the U.S. hopes to play in the Hexagonal round of World Cup qualifying round, and that tournament could be tricky unless the Yanks are able to raise their level of performance beyond what was on display Friday night.

Agree? Disagree? Either way, we want your take in the Comments section below.