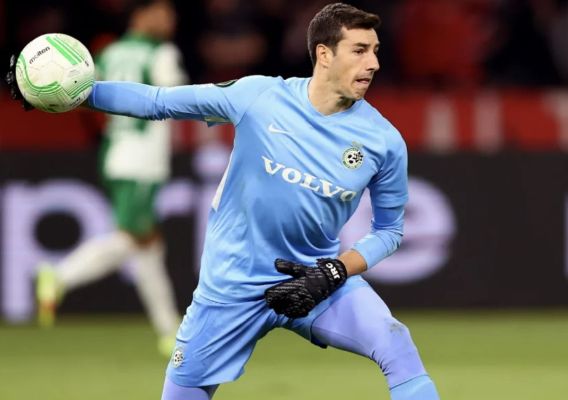 Maccabi Haifa goalkeeper Josh Cohen is one of 11 Americans on Champions League group stage rosters and his rise to the top levels of the game has taken him through unusual twists and turns. ASN's Brian Sciaretta spoke with the Mountian View native about his remarkable rise.
BY Brian Sciaretta Posted
September 06, 2022
4:00 AM

THE UEFA CHAMPIONS LEAGE group stages get under way on Tuesday and American goalkeeper Josh Cohen knows that his Maccabi Haifa team is considered a deep underdog. The Israeli champions were drawn into Group H along with Paris St. Germain, Juventus, and Benfica – which it will visit in the opening game.

For Cohen, not much is expected of him or his team but the truth is that the difficult draw is what he and his team hoped. For many players on the team, including Cohen, this is the chance for them to get noticed by scouts and fans outside of Israel. This is also a chance for them to experience the game at the highest of levels.

When looking at the list of American players involved in the Champions League group stages, Cohen stands out. Christian Pulisic, Gio Reyna, Weston McKennie, Sergino Dest, John Brooks, Cameron Carter-Vickers, Malik Tillman, James Sands, John Brooks, and Owen Otasowie make up the 11 other American players. Everyone has been capped by the U.S. national team and most of them were considered top prospects who have played in youth World Cups.

Cohen, however, is far different. He is the only player on that list over 30 and he has never played for the United States at any level. In fact, when he was coming out of college at UC San Diego, he toiled away in USL before moving to Israel. During that time, he hoped for an MLS gig - which never came.

“I kind of expected my path to be something like - I'm playing in USL, if I do really well the MLS opportunity will come,” Cohen recalled. “I'll get in contact with some teams and things will fall into place. That really just didn't happen.”

Growing up in Mountain View, California, Cohen is not particularly well connected with the highest levels of American soccer and the only player he knows in the greater national team pool is Sebastian Lletget who was his teammate at the Santa Clara Sporting from the U-13 through U-16 levels.

In the Champions League, Cohen looks forward to meeting Weston McKennie and possibly John Brooks who are also in Group H. He also hopes that the experience allows him to build up his name recognition back in his home country. 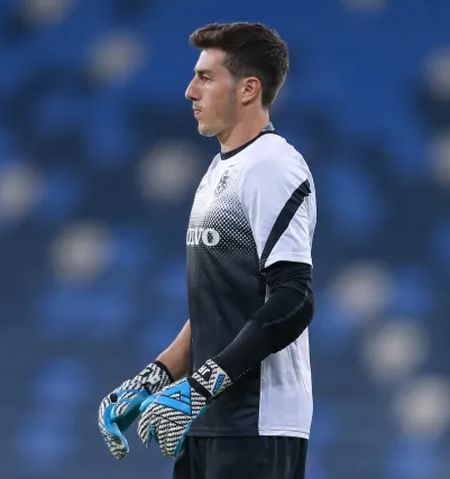 “I'm honored at this point to be even on the list of Americans in the Champions League with these great names,” Cohen said. “A lot of them represent the country and are some of the strongest players on the national team. That is just amazing.”

While Cohen’s rise to the Champions League might seem like something out of the blue, the truth is that it had been building impressively for the last several years.

In 2013, Cohen graduated UC San Diego after a strong college career. With no initial MLS interest, he moved to the Burlingame Dragons of the USL PDL. He then moved to the Orange County Blues, Phoenix Rising, and then to the Sacramento Republic – all of the USL Championship. By 2019, he was the USL Goalkeeper of the Year but there were still no MLS teams interested.

Josh Cohen's one-handed save vs Reno takes the @SAFEcu Save of the Month for May ????#TBT pic.twitter.com/XrjqoKRiP4

In the summer of 2019, Maccabi Haifa moved very quickly: “it just fell into my lap at the last hour out of the blue.” On a Tuesday in July, Cohen got word Maccabi Haifa was interested and by Friday, he was on a plane.

“I saw it really is just an opportunity that I couldn't pass up,” Cohen said. “It was very unknown but it was something where I thought in 10 or 20 years, if I looked back and I didn't do it, I would regret it.  In hindsight, things worked out amazingly well.” 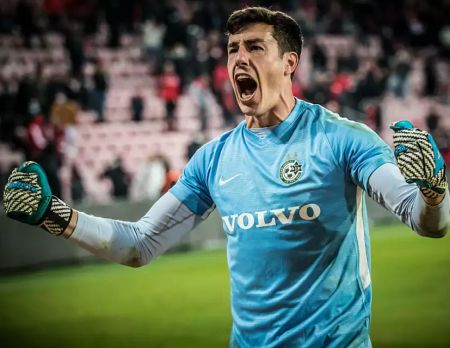 While Cohen was already in solid form when he moved to Israeli, it was with Maccabi Haifa where he took his game to an even higher level. Maccabi Haifa wasn’t a typical Israeli club but instead was one of the country’s most historically powerful teams having won fourteen league titles, six State Cups, and holding the Israeli club record for the most Champions League group stage qualifications.

The most impressive trophy came when Cohen was named the Israeli Footballer of the Year for the 2020/21 season – an award not typically given to goalkeepers.

American GK Josh Cohen came up BIG for Maccabi Haifa in their 3-2 win over Red Star Belgrade and are one game away from the #UCL group stage. ???? pic.twitter.com/OyBqBugSDJ

“The biggest part was kind of the sink or swim mentality of being tossed into a much larger pond and then having to deal with it,” Cohen recalled of moving to Israel. “When I first arrived in Israel in terms of my shot stopping - I did pretty well. One thing I struggled with for the first month was reading the game and the speed of play. In training we were playing small-sided games and the players are making decisions much quicker than I was used to and were demanding me to make my decisions much quicker than I was used to.”

“That environment helped lift me up to a place where I never tried to push myself to read the game at that speed because it never really was asked for me,” he added. “With some of the coaches I've worked with here have been very demanding. They expect a lot.  How you respond and those things together works to help you improve quickly.”

Now Cohen will have the opportunity to showcase himself outside of Israel and the path towards qualifying for the group stages was extremely impressive, and difficult. 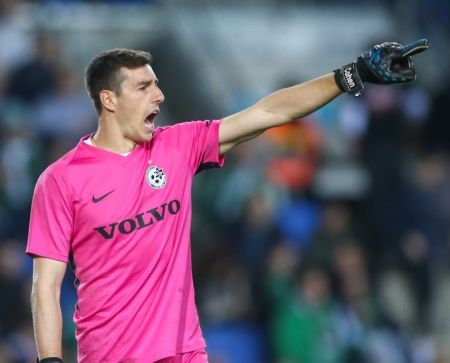 Maccabi Haifa began its campaign in the second qualifying round against Greek champions Olympiacos. After a tough 1-1 draw in Israel, Maccabi Haifa put in a stunning performance in a surprising 4-0 away win in Greece. Then in the second round, Haifa got past Apollon of Cyprus 4-2 on aggregate.

The final playoff round over Red Star Belgrade was the most dramatic. Maccabi Haifa won the first leg at home 3-2. In the second leg, it fell behind 2-0 but rallied for two goals for a 2-2 draw and a 5-4 aggregate win. The winner came in the 90th minute off an own goal.

“We knew after winning 3-2 a home that it would be a lot more difficult in Belgrade,” Cohen said. “Last year, the team we lost to in qualifying, Kairat Almaty, went on to play Red Star after us. They beat Red Star 2-1 at home and then went to Belgrade and lost 5-0. We knew there was kind of this balance for that game of knowing you have a one goal advantage, but also not being complacent or just trying to defend. That that won't work. And I think in the first half, we were a little bit torn between those two options. We took a couple of punches, but we scored right at the end of the half gained some momentum back, gave us the confidence we needed to just go out and go for it in the second half. It worked out quite well.” 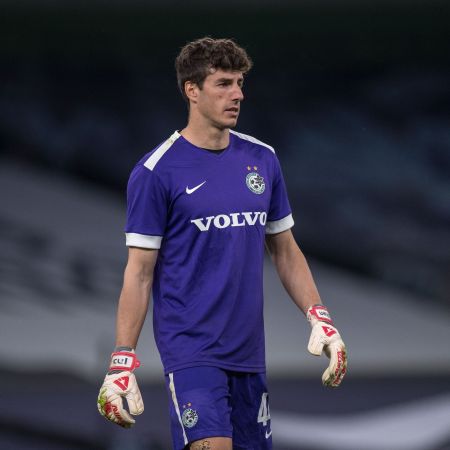 Even though he is now 30, Cohen believes he has plenty of more to accomplish in the game. In the years ahead, he is keeping the door open towards moving to Europe or possibly following his original professional of goal of playing in MLS.

“I definitely would not have to think about it,” Cohen said about playing for the United States.  “I do, a little bit, want to keep both paths open to see what opportunities may come up. But when I was growing up, I never thought that I would play in Israel, let alone be eligible to play for the national team. It was always the US team that I was thinking about or watching or wearing the jersey.” 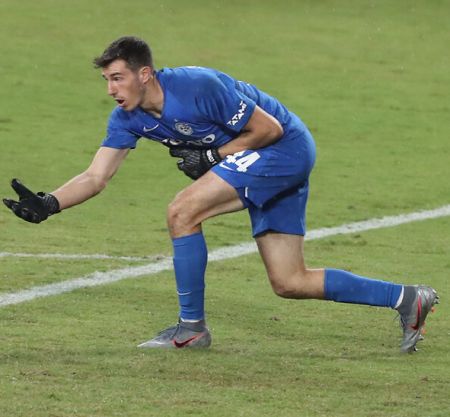 It is all exciting for Cohen as he has never been in the discussion for the U.S. national team before and no one yet knows if he is in Berhalter’s plans. But for the first time, Cohen feels more comfortable to dream about it in a realistic way.

“It definitely does feel like and I am closer now,” he added. “I think it's just an inevitable feeling of being in Champions League or playing at a high-level club team. Even though our club team isn't a name brand club outside of Israel, it's definitely something where when you’re playing at this level, you get the sense that it's not that far away.”