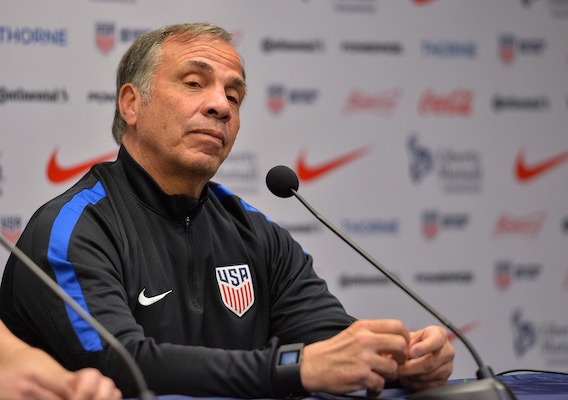 Bruce Arena and Jurgen Klinsmann are polar opposites when it comes to dealing with the press. The new boss, a New Yorker, is refreshingly unfiltered and will no doubt keep reporters on their toes.
BY John Godfrey Posted
January 29, 2017
3:00 AM

SAN DIEGO—Maybe it was the language barrier, maybe it was his management style, maybe it was that Jurgen Klinsmann never respected the folks who covered the United States men's national team and that's why his interactions with the press always felt so pedantic and forced.

Klinsmann always had plenty to say during his press conferences, certainly—it's just that none of it seemed particularly heartfelt or real.

Klinsmann was polite but not authentic.

Bruce Arena is authentic but not polite.

On the second occasion Arena added this: "Do you want me to expand on that? Yes, I definitely think so."

Holding court like a Borscht Belt comedian, the Brooklyn native got his laughs and then proceeded to give the reporters the sound bites they sought. He wasn't being mean—he was being playful. But you better believe that those reporters will be fine-tuning their inquiries at future press conferences.

These same reporters would be well-advised to keep their microcassette recorders and iPhones at the ready at all times. Out of nowhere, Arena decided to discuss U.S. Soccer financials: "The federation itself has grown in leaps and bounds. When I started in November 1998 we were on the verge of bankruptcy—I’m not sure I’m allowed to say that, but we were. We can probably buy everybody a cup of coffee today and not have any problems."

In response to a question about the Serbian national team's priorities: "I can’t speak for the Serbian team...but there must be a reason they came here. I don’t think it’s just to see the zoo in San Diego."

Arena's candid approach extended beyond caffeine and Koala bears. He had a lot to say about the U.S. player pool, and given his personal communication style—he's a blunt New Yorker—the coach's words carry some weight. Here are some lightly edited remarks from Saturday's press conference that could provide a bit of insight into the direction of the team.

Jozy Altidore
"Jozy is, at this point, 27 years old, 28 years old. He’s earning his 100th cap. He’s coming off a good year and he’s confident. He continues to grow as a player and a person. He’s had such a good attitude. Our strikers are all potentially good, dangerous attacking players—Altidore, Jordan Morris, and Juan Agudelo."

Juan Agudelo
"He’s a very talented player. I know he’s played in a variety of positions at New England. We’re asking him to play as a No. 9 and out wide as well. He’s shown very well. He has pretty good pace. He’s physically strong. He’s now 24 years old and he’s matured physically. He’s very strong at playing with his back to the goal and can hold the ball up. He can also face the goal and go by people. When we look at the three weeks in training, he has probably scored as many goals as anyone."

Sebastian Lletget
"Regarding Sebastian, we’ve used him primarily as a No. 8 during this camp. He can play out wide for as well but I think that’s a little bit of a hole for us right now, in particular because of the fact that Jermaine Jones will not be able to play for us against Honduras so we need to look at a couple of players at that position. He’s going to see some time the next couple of games."

Walker Zimmerman
"I think Zimmerman is going to be a real good center back. Walker is a good young player. Walker has gotten better every day and he’s very good in the air. He’s physical. He’s getting the ball off his fit. He’s been impressive."

Alejandro Bedoya
"A player like Bedoya, for example, is a very experienced and seasoned guy with a lot of quality."

Greg Garza
"Greg Garza is an experienced player in the national team program. He’s been here before. He’s very fit, and he’s very comfortable at the left back position. He’s done a good job."