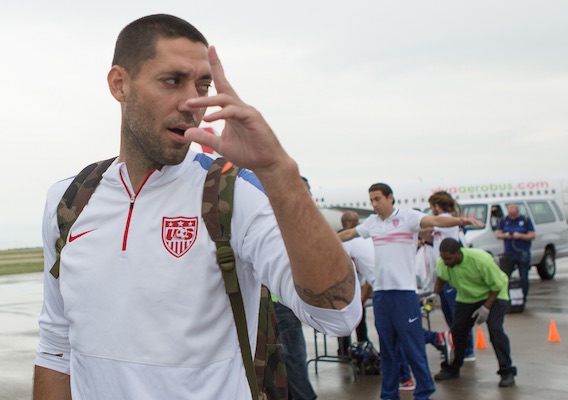 The 32-year-old forward began the 2015 Gold Cup in a swirl of controversy but he has responded brilliantly, scoring six goals in four games and leading the U.S. to an unbeaten record.
BY Brian Sciaretta Posted
July 20, 2015
9:20 AM

THREE WEEKS AGO Clint Dempsey was suspended for three games by Major League Soccer as punishment for abusing a referee during a U.S. Open Cup match. After that, U.S. head coach Jurgen Klinsmann stripped Dempsey of his captaincy and handed the armband to Michael Bradley.

Nobody knew for sure how the proud, pugnacious Texan would respond to the highly public upbraiding. Would he apologize? Would he sulk? Would he redouble his efforts and try to redeem himself?

Yes. No. And absolutely.

I would like to apologize for my actions in the U.S. Open Cup.


Through the Gold Cup quarterfinals Dempsey is by far the most dominant player in the tournament. He scored three of his team’s four goals during the group phase and his terrific pass was crucial in the build up to the other goal. Then, against an overmatched Cuban team in the quarterfinals, Dempsey scored a hat trick to raise his tournament-leading total to six. His career goal tally for the national team is 47.

“They’re a team that had some good quality players on it,” Dempsey said of Cuba. “When you start well and you get goals, you get confidence. Then the game has to open up. In the other games, that wasn't the case. We know they're a team that grows in confidence as the game goes along. You could see that in their Guatemala game. So credit to them in dealing with the situations they had to deal with and getting out of their group.

"At the same time, we knew we had to put on a professional performance, and we did.”

The 32-year-old will no doubt be the focal point of the American attack against Jamaica on Wednesday (6pm ET; Fox Sports 1, UniMas).

The Gold Cup is a pass/fail tournament for the Yanks: Winning is the only thing that matters and anything that falls short is a failure—as Bob Bradley learned in 2011 when he was fired shortly after losing to Mexico in the final.

Of course with this Gold Cup, the prize is not simply regional dominance. If the U.S. wins it would clinch a berth in the 2017 Confederations Cup, while a loss would force it into a playoff against this year's champion.

“You always want to score as many goals as possible but the important thing is that the team does well and we try to win this tournament and we can be in the Confederations Cup,” Dempsey said. “We know we have two difficult games in front of us and that the semifinals will be tough. We can't look past Jamaica. We have to make sure we look at the tape and work on things but I feel like we're moving in the right direction.

“I think the level in CONCACAF is good,” he added. “You look at the last World Cup with Costa Rica, Mexico, and ourselves, we all got out of our groups. We represented CONCACAF well. The Gold Cup is definitely a good tournament with some good teams.

"You've got to be at your best if you want to win this tournament.”

Klinsmann, for one, is is excited at what Dempsey has brought to the table so far at the Gold Cup.

“I didn’t know it was his first international hat trick. It took him a long time,” Klinsmann joked after the Cuba match. “For strikers in a game like this, it’s a huge opportunity. You don’t want to miss that chance to get more opportunities than you might usually get in an international game.

"That’s what I told them: 'Don’t waste any chances.' I think that’s one good point throughout the tournament so far, we don’t need many chances. Once we are in the box, we are very clinical. I think Clint is the best example. There’s no doubt about it.”

Behaving in a very, well, captainlike manner, Dempsey deflected praise and was quick to credit his teammates for getting him the ball in dangerous positions.

After his early goal, however, Dempsey and the rest of the U.S. played with a swagger that we hadn't seen from them in this tournament.

"Scoring goals, getting a clean sheet, people getting an assist, people scoring goals—the confidence definitely grows in the team. As the tournament goes on, we're getting stronger as a group.

"Hopefully our best is yet to come."