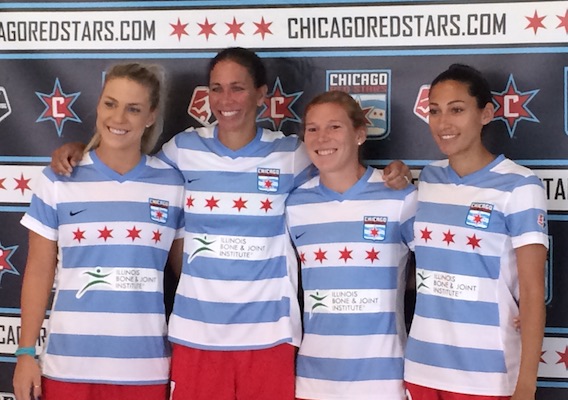 Christen Press: "We Love the Game. We Love to Play"

Over the weekend four members of the victorious U.S. women's national team returned to their club, the Chicago Red Stars, and discussed the future of women's professional soccer.
BY John D. Halloran Posted
July 20, 2015
12:30 PM

SINCE WINNING THE WORLD CUP two weeks ago in Canada, the players on the United States women's national team have returned to the U.S. as conquering heroes. They have enjoyed a ticker-tape parade in New York City, made the rounds on the morning talk show circuit, and attended the ESPY's—where they won something called the "Outstanding Team Award."

On Saturday, four U.S. players returned to NWSL club duty with the Chicago Red Stars. Speaking with the media ahead of the team's 1-1 draw with the Boston Breakers, the quartet recalled their experience over the past few weeks and talked about what's next for the league and women's soccer in America.

Shannon Boxx, who played in her fourth World Cup for the U.S., was quick to credit the American fans for their support during the tournament.

"It was so close to the U.S.," she said, "it almost felt like we were in the U.S. We had such a great crowd, the fans were amazing. It felt like home. We definitely had the advantage for every game with our crowd."

That sentiment was echoed by teammate Julie Johnston, who was a key component of the U.S.'s defense in the World Cup and a finalist for the Golden Ball.

"Every single game, it was remarkable to see how many U.S. fans were there. Especially when we came back to the States, it was even greater—which I thought was going to be really hard to top," Johnston said. "But doing the parade, just walking around, the amount of support we got as a team was awesome."

But now that the parades and celebrations are winding down, the key for women's soccer in America is what comes next. The women's game benefited from strong public interest following the 1999 and 2011 World Cups but the success and popularity of the national team didn't translate into long-term success for the professional leagues in the U.S. The WUSA—born out of the 1999 World Cup—eventually collapsed, as did its successor, the WPS, which folded only months after the U.S.' inspiring run in the 2011 World Cup.

Lori Chalupny, who made an improbable run to make the World Cup roster this summer, sees transferring the U.S.'s World Cup success to the NWSL as the next test.

"The challenge is to keep it going," Chalupny said. "World Cups only happen every four years. Winning gave us a bump in viewership and the attention that has been given to the sport. The great thing is we have this league—we play every year. It's in people's hometowns and people can come and watch us play.

"Hopefully, that will continue the momentum."

Christen Press, who scored in the Americans' World Cup opener against Australia, believes that fan support will be crucial in this step.

"It's an incredibly important moment for women's soccer," said Press. "We've had such a great ride through this summer and we're hoping to continue it. The important thing is for the fans—who have been so great for us and the national team—to continue to support and come out to the NWSL games and see that there are hundreds of women in this country that play great soccer.

"It's something that's worth watching. If the fans continue to support us, in our league, that's going to push women's soccer in America forward."

The U.S. win in the 1999 World Cup, and the iconic moment of Brandi Chastain hitting the winning penalty kick in front of a packed house in the Rose Bowl, was widely credited for inspiring a generation of young American players. And 2015 World Cup winner Press sees the same thing happening again.

"A lot of us play so the young girls can look at our team and say, 'I can do that.' That's why I thought the ticker-tape parade was so special—because we looked out into the crowd and there were girls there and I could see it in their eyes that they were thinking, 'I want this.'

"That's the future," Press continued. "They can be better than us, they can push the game forward. A lot of my journey has been to allow people to dream."

Making the domestic league successful is also important to the future of the national team, as several players over the years have used the WUSA, WPS, and NWSL to make the move to the international level. Chalupny used her play with the Red Stars to earn a recall to the national team after a five-year absence and Boxx first earned her way onto the U.S. squad back in 2003 based on her club form.

"That's the important part of the league, that we get to train every single day," Boxx said. "I'm a byproduct of a league: the WUSA. I got noticed in that league and that helped me get to the national team."

Boxx, 38, also confirmed on Saturday that she will be retiring following the 2015 season.

"I'm going to be done at the end of the year," said the midfielder. "I would definitely like to continue playing through the victory tour and trying to enjoy the last moments of playing, but I definitely want to continue to be a part of the game as much as possible. I definitely think my time has come—pass the torch and enjoy my family."

Moving forward, the U.S. will embark on a 10-game victory tour while the national team players will also be looking to bring success to their club teams. The Red Stars are in first place in the NWSL and Press is already looking forward to adding another championship to her resume.

"This team has done phenomenal while we were gone and that puts us in a great position to start to dream again," she said, "to dream about winning the NWSL.

"We're all here because we love the game and we love to play."