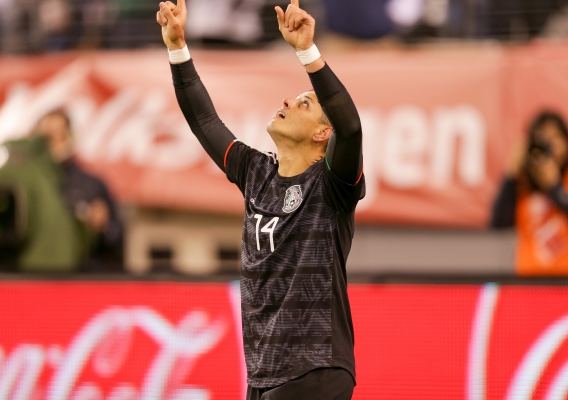 What does Chicharito's deal mean for the Galaxy? What is the deal with Jozy? Will Pomykal be back soon? What were the stories from this week's midweek games? ASN's Brian Sciaretta looks at it all
BY Brian Sciaretta Posted
January 22, 2020
3:00 PM
THE MIDWEEK IS HERE and it is not without a fair share of news. It was tough to match the fireworks on display American players put on over the weekend, but it was pretty close. And for starters, the derby between the two Los Angeles teams is going to be awesome.

Let’s start unraveling it all.

Chicharito finally lands with the Galaxy


In the worst kept secret of the MLS offseason, the LA Galaxy finally got their man with Javier Hernandez from Sevilla. This is a monstrous deal that keeps the Galaxy at the forefront as the biggest deal maker in the history of MLS. David Beckham, Zlatan Ibrahimovic, Landon Donovan, Robbie Keane, and now Chicharito.

But no other team has been able to make splashes like the Galaxy – who bring in players who can still contribute, win, and have the star appeal to make Carson, California the place to be in Southern California. This team can shake things up and get the headlines other teams can only dream of. Beckham started it off and with him winning titles, he backed it all up. Zlatan brought the Hollywood personality. Now Chicarito will play to the biggest fanbase in the city and perhaps the United States. It’s a remarkable counterstrike to Carlos Vela’s success just miles away.

Chicarito, 31, is the all-time leading scorer for the Mexican national team and that alone is enormous in Los Angeles. He’s recognizable and comes at an age where he still has more to give on the field. Sure, the trend in the league is to bring in younger South Americans who can later be sold and also player younger American players. But big splashes are healthy from time to time. They provide a jolt of excitement and have everyone starting to talk about the upcoming season.

How will Chicharito perform? The excitement of a big-name signing is limited unless the team wins. Schweinsteiger couldn’t help Chicago win and it wasn’t long when his name wasn’t selling anything in Bridgeview.

Obviously, the Galaxy have a lot of goals to replace with the departure of Zlatan. But Zlatan didn’t help the Galaxy win much in his two years. When he was with the Galaxy, everything was about him. Even with Chicharito, it is not going to be about him – at least not within the team. Other players are going to have more freedom – players like Jonathan Dos Santos, Sebastian Lletget, Carlos Pavon. While Zlatan would score from all over the place, Chicharito makes devastating runs – which alone will pull opposing defenses apart. There will be more space for Galaxy players and Chicharito, who scores most of his goals from close range, will be a fantastic target on the end of passes.

The Galaxy still have holes. They need more central defenders and backup in other places. But now Guillermo Barros Schelotto will finally begin to implement his own vision into the team.

And we thought the Galaxy-LAFC games were great last year, just wait until this year.


Without a doubt, things in Toronto are off to a terrible start in 2020. First, there was news that Michael Bradley is going to have surgery this week for an ankle injury he suffered in MLS Cup and could miss up to four months. Then, his teammate, Jozy Altidore made statements highly critical of the way Bradley’s injury was handled.

“But make no mistake: in my opinion it was handled poorly,” Altidore said. “This is an injury from two months ago. And it's not the first time this has happened: we've seen our injury rate at this club since ‘18. And we're obviously trying to get it better, but it hasn't and two months have gone by and now he's having surgery to be out to June.”

“I don't know [if it was misdiagnosed], but, like I said, I don't think it's good enough,” he added. “He's a guy that takes care of himself in an incredible way, professionally pushes himself and the group, holds everybody to a high standard. I think he was let down.”

Altidore is not a doctor but he’s perfectly within his rights to question everything away from the media. Bradley’s loss is huge to Altidore and Toronto and it’s understandable to be frustrated that surgery is only happening now when the injury happened over two months ago.

But going public like this when he doesn’t have all the facts and isn’t a doctor is careless. And then, you have news like this coming up to the surface today.


Hearing that as a result of Jozy Altidore’s public criticism of TFC’s handling of Michael Bradley’s ankle injury last season, the club is considering a move for the #USMNT striker. #TFCLive

It's hardly a surprise Toronto would be considering this. Altidore is expensive, often injured, and prone to making comments that are out of bounds. Last April, Altidore went off on Toronto team president Bill Manning over the loss of the trainer who he said was no longer allowed near the club since he was close with Sebastian Giovinco.

These things have a cumulative effect and Toronto has a boiling point. But could Toronto move Altidore? It would be tough unless they eat a huge portion of his huge salary.


Last week, Paxton Pomykal was forced to leave the United States national team camp in Florida due to him still being injured from the groin surgery he underwent back in October following the FC Dallas season.

It was a big setback for Pomykal, FC Dallas which has its season opener weeks away, and the U.S. U-23 team – which has Olympic qualifying fast approaching in March. But for Pomykal, it was his third surgery in three years (preceded by meniscus surgeries on each of his knees).

“US soccer and our medical team were in touch before the new year,” Gonzalez said. “He was invited to camp which is a great honor for him. He’s worked hard to earn that, it’s a great honor for our club, so we wanted to make it work and make sure that there was a an integration both for him physically, and then obviously for the concepts of that Gregg Berhalter is working with.”

“He’s coming back from something that that’s not easy but the positive news is, any little setback is mostly scar tissue, and it’s just part of the process of coming back from that kind of injury,” he added. “I went through that kind of injury twice on both sides, so I know what it’s like but he’s feeling really good and we’re hoping that by the end of the week, he’s fully included in the group.”


Over the weekend, U.S. U-20 midfielder Indiana Vassilev hit a milestone with his Premier League debut when he came on for Aston Villa in the 67th minute of a 1-1 draw against Brighton & Hove Albion. Villa manager Dean Smith was full of praise for the Savannah, GA native.


Dean Smith: “He is definitely ready to start. The kid's a bright spark, and we've seen that when he's come on so far. He gave them (Brighton) problems on Saturday when he came on.” [birmingham live] #avfc pic.twitter.com/IzPXesfYKw

But Smith continued to show faith in the American on Tuesday when he subbed Vassilev into Villa’s game against Watford in the 77th minute with the score 1-1. In the end, Villa found a winner in the fifth minute of stoppage time.

Yes, Aston Villa has been dealing with injuries and Smith is trying to shake things up. But Vassilev has been getting on the field in very important minutes for a big club in a relegation battle. He’s played nearly 40 minutes and Villa has outscored its opponents 2-0 with Vassilev on the field. Managers typically don’t want to change a formula that gets results, so expect Vassilev to continue to play.

Also, in midweek action, Tim Ream earned the start for Fulham in a London derby away at The Valley to take on Charlton Athletic. Ream, along with his central defense partner Michael Hector, were the best Fulham players on the day. The game finished 0-0, which wasn’t ideal for a Fulham team pushing for promotion but it wasn’t a huge setback either.

Finally, Sergino Dest earned the start for Ajax in a Dutch Cup matchup against Spakenburg. The game turned out to be a total laugher with Ajax cruising to a 7-0 win. Dest went a full 90 against the third division side.