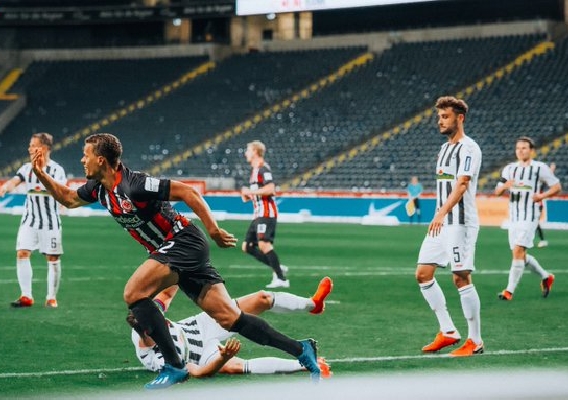 It was a pretty good midweek slate of games for Americans as McKennie and Chandler both found the back of the net but the best performance went to John Brooks who was stellar in a big Wolfsburg win. Elsewhere, Sargent continues to start but Werder hasn't been able to make up ground in the relegation battle on Alfredo Morales and Fortuna Dusseldorf. ASN's Brian Sciaretta breaks it all down with data, highlights, and analysis.
BY Brian Sciaretta Posted
May 28, 2020
8:00 AM

THE BUNDESLIGA had its first slate of midweek games on Tuesday and Wednesday since the restart which forced teams to play in quick succession with only a few days rest since the games over the weekend. From a team perspective, it was revealing and American players were once again playing important roles.

From a title perspective, Bayern Munich erased any doubt about whether or not it would win its eighth straight Bundesliga crown. It defeated Borussia Dortmund 1-0 on Tuesday and now has a solid seven-point lead atop the table. But it was more than the win, Bayern was simply better than a Borussia Dortmund that came into the game having won six straight and having outscored opponents 15-1 during that span. It was a firm reminder that this will not be the season where Bayern is finally dethroned.

But it was a noteworthy slate of games for American players.

On Tuesday, Josh Sargent earned a second straight start for a Werder Bremen team that is climbing upward in the standings. John Brooks and Wolfsburg were terrific in a 4-1 win over Bayer Leverkusen, Timothy Chandler delivered at huge moment for Eintracht Frankfurt with his fifth goal of the season, and Gio Reyna was a late sub in Borussia Dortmund’s effort to push for an equalizer.

Here is a detailed look at the games

Over the weekend, John Brooks had a mostly positive effort for Wolfsburg despite a 2-0 loss to Borussia Dortmund. While he was stretched out of position on both goals, he was also instrumental in keeping Earling Halaand off the scoresheet. In the end, Dortmund was just simply better.

Brooks got another start on just two days of rest on Tuesday and was magnificent for Wolfsburg in a 4-1 win over fifth-place Bayer Leverkusen. He was subbed out in the 81st minute but was one of the best players in the game.

His raw numbers paint a positive story, but don’t tell the whole thing.

Brooks was dominant and this has been the story since before the shutdown. Starting the second half of the season, Brooks was benched but he regained the role when a teammate had to serve a red card suspension. Since February 15, Brooks has played with a tenacity in his game and has been the high value defender Wolfsburg should expect.

It brings us to this point.

He was outstanding today. If he was 20% more consistent he could play for any team in the world

This is true. It's always about consistency with Brooks. Everyone has seen just how good he can be when he’s on his game. Can he deliver it on a consistent basis? Possibly. But he’s on a very good run right now and it might just help Wolfsburg get into the Europa League next year.

Timothy Chandler, 30, has scored five goals and added one assist this season – all since January. He’s only played 1003 minutes in 2019/20. Offensively, he’s been great on set pieces, counter attacks, and long balls. He’s mostly playing as a winger these days but he’s been a boost for Eintracht.

In this game, Freiburg had a 3-1 lead on Eintracht late in the game. After the lead was cut to 3-2 in the 79th minute, Chandler entered in the 81st minute. Less than a minute coming on, he buries an equalizer.

It has been a poor run from Eintracht which came into the game having lost four in a row and only emerged with a point. The relegation line had been getting closer but the draw gave it a five-point cushion.

But without a doubt, this has been the best offensive run of Chandler’s career so far.

Then there is the question of the national team. While he is over 30, a return to the national team is not completely out of the question. But the question is what type of role or what position would he play? Chandler has been capped 29 times for the United States dating back to 2011. It has not always been a smooth ride with uneven performances, his unwillingness to play in the 2011 Gold Cup, and Jurgen Klinsmann engaging in a standstill with Chandler over his lack of commitment.  His last appearance was in 2016.

But Chandler is playing well right now. The U.S. team is deep at right back with Sergino Dest, DeAndre Yedlin, and Reggie Cannon all making strong cases to be involved. Chandler has played left back for both club and country at times but right now he is playing wing – typically off the bench.

The U.S. team is still unsettled at wing right now. Christian Pulisic is probably the best American player but he might play as a No. 10 these days for the U.S team. Jordan Morris had a very strong 2019 for the U.S. team. Tyler Boyd is still not settled within the U.S. team. Paul Arriola is hurt and injuries have also limited Tim Weah. Uly Llanez is still has not played regularly above the U-19 level.

If Chandler were to return to the team, it would probably be as a winger off the bench. He’s fast, athletic, and tough to defend. His passing was solid yesterday but he has had a low completion percentage throughout the season. He probably won’t start for the U.S. team as a result (and that is probably why he hasn’t started much for Eintracht). But he is showing himself to be a very useful player off the bench. While the U.S. team has gotten younger and Chandler is over 30, a return to the team might be possible – although it remains to be seen when the team will play again.

Over the weekend, Josh Sargent got the start for Werder Bremen in a huge 1-0 win over SC Freiburg. He played a little over an hour and had solid moments trying to press, winning aerials, and in his hold up play. But the problem is that he saw too little of the ball with just 21 touches and no shots.

On Tuesday, Sargent started again against a very good Borussia Monchengladbach team on short rest and the performance was similar. He played hard and well in certain areas of the game. His defense and pressing were solid. He was good in the air. He drew some key fouls. His passing was improved from the Freiburg game. Still, he saw too little of the ball.

There are two bits of good news. The team earned a 0-0 draw against a good Monchengladbach team and has four points from its last two games to keep pace with Fortuna Dusseldorf. Managers are reluctant to change a formula that is getting results. The second bit of good news is that he’s playing well in a number of different areas. He also knows specifically what he needs to work on – his off the ball movement and finding ways to get open in creating space between him and defenders.

If the club is turning to Sargent during these games, then he is valued by the club. It shouldn’t be understated how important playing these games really is as a reflection of where the players stands.

Tyler Adams was 13/13 passing while coming off the bench for RB Leipzig in Saturday’s 5-0 rout over Mainz. He played central midfield and his positive performance gave hope that he would start in that position against Hertha BSC on Wednesday. But the truth is that the rest of the team performed very well and Adams entered the game with Leipzig up 4-0, so leapfrogging over other players was tough.

Adams was scheduled to begin Wednesday’s game on the bench for Leipzig but was inserted into the lineup just minutes before kickoff due to Kevin Kampl picking up an injury in warm-ups.

Adams played right back and went a full 90 in a disappointing 2-2 draw for Leipzig. Adams was not poor but his performance was forgettable.

These raw numbers do not reflect that most of his passing was lateral or backwards but it does show that he struggled with his crossing.

It is naturally tough for any player to adjust into the starting lineup just minutes before kickoff but it also shows, as many believe, that Adams is a much better centrally-based defensive midfielder than he is a right back. He’s not a bad right back but it doesn’t best utilize his skillset.

On the other hand, when you are a young player at a very big club, there is always a lot of competition to see the field and young players often have to play minutes at their second positions.

Schalke is a very poor team at the moment and that was reflected again in Wednesday’s 2-1 loss to Fortuna Dusseldorf. Coming into the game, Schalke had been outscored 22-2 over its last 842 Bundesliga minutes.

In the 53rd minute it appeared as if their fortunes had changed when Weston McKennie headed home a free kick for a surprising 1-0 lead. Coincidentally, McKennie was also the last player to score for Schalke in a 1-1 draw against Hoffenheim on March 7.

The goal was a great effort from McKennie to get open and finish with a well-placed header.

Here is the goal from #USMNT midfielder Weston McKennie pic.twitter.com/YdjaRgWGwT

But the lead was short-lived. Rouwen Hennings equalized in the 63rd minute for Fortuna Dusseldorf and Kenan Karaman put Fortuna into the lead in the 68th minute. On Karaman’s goal, McKennie was not responsible for marking Karaman but he was in a position that kept the play onside.

U.S. national team midfielder Alfredo Morales came in in the 81st minute to help preserve the win for Fortuna. It was a massive three points for the winners who have been able to withstand a charge from Werder Bremen in the relegation fight. Bremen has also has four points from its last two games and has not made up any ground on Fortuna to climb out of the automatic relegation positions and into the relegation playoff position.

But both teams are gaining on Mainz for the last survival place. Fortuna is just one point from Mainz and Werder is six points from automatic survival.

For Schalke, it is now down to ninth place after holding the sixth position at the restart. It is winless in 10 games and has scored just three times in that span. McKennie’s raw numbers once again showed a lot of strength defensively.

But these numbers do not reflect how well he played in other defensive areas. He was effective hustling down attackers with the ball and he showcased the speed necessary to outrun opposing players. He was good in the air and disrupted Fortuna’s attack throughout the game.

Schalke is a mess right now and next week it will have to face a heavily motivated Werder Bremen team that is also playing with its back against the wall.

Reyna a late sub vs Bayern

Gio Reyna, 17, was a late sub in the 71st minute to help Dortmund push for the equalizer. He played well, but Bayern Munich was simply better.

His best moment was earning a dangerous free kick with a foul. But there was a moment late when he could have fired a shot, but didn’t. Still, a positive contribution in a losing effort to a better side.

But with the title race essentially over and Dortmund with a decent cushion for a Champions League place, perhaps Reyna will now begin earning starts for Dortmund. That appears to be coming sooner than later.