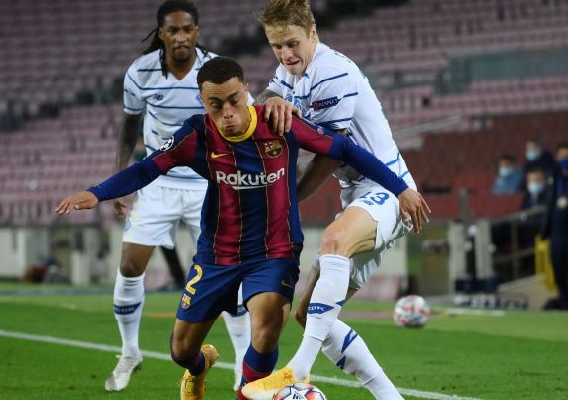 ASN's Brian Sciaretta is here to update you on midweek games, both domestically and abroad, as well as player news - including updates on Josh Sargent and Jens Cajuste.
BY Brian Sciaretta Posted
November 05, 2020
11:50 AM

THE MIDWEEK slate of games, both domestically and abroad, was eventful for American players as several payers won Champions League games while other helped secure important positions in the MLS playoffs. There was also a lot of news stories that relate to the U.S. team as well.

So, with all the news out there, here is what caught my eye:

Sargent likely out for November friendlies

Due to local quarantine laws in Bremen, Bundesliga club Werder Bremen today announced that Jiri Pavlenka would be the only player allowed to join his national team for the November window. This was later amended to include Jean-Manuel Mbom.

?? Due to quarantine regulations, Jiri Pavlenka will be the only #Werder player permitted to join up with his national team during the upcoming international break.

What this means is that there is a change in rules (which seems unlikely), Josh Sargent will be dropped from the U.S. national team roster for the upcoming friendlies. At this point, it is unclear if U.S. Soccer will replace Sargent with another player. If another forward is added, European-based options could include Aron Johannsson, Haji Wright, Emmanuel Sabbi, or current U.S. U-20 forward Charlie Kelman at Queens Park Rangers.

What is also more of concern for the U.S. team will be if other regions in Germany or Europe implement other restrictions. There are four remaining German-based players on the roster: Gio Reyna, Tyler Adams, John Brooks, and Chris Richards.

The U.S. roster, while promising, contains several inexperienced players who have not even played 10 first-team games in their careers (or even over the past 18 months). Sargent was one of the more experienced options and if more of the top German-based players withdraw, the roster takes a major it.

Many key dual nationals have opted to play for the United States recently. Sergino Dest last year and Yusus Musah is on the current roster (although his long-term commitment is not settled).

Recently there has been some discussion about Jens Cajuste, 21, who is a starting central midfielder for FC Midtjylland, the reigning Danish champions. Cajuste has also made three Champions League appearances so far the past two months.

ASN was able to confirm the Gregg Berhalter had been speaking with Cajuste about possibly switching his international allegiance from Sweden to the United States. Cajuste was born in Sweden to a Haitian-born father who is a naturalized American citizen. Cajuste has had an American passport since birth but was raised in China.

ASN spoke with Cajuste’s family and was able to confirm, however, that Cajuste will play for Sweden and will be on Sweden’s roster for the upcoming Nation’s League games – which will formally cap-tie him.

I spoke with the family of Midtjylland’s Jens Cajuste about his options with both the #USMNT & Sweden - “I can confirm that he's decided to play for Sweden. It was a difficult decision and wasn't taken lightly but in the end we're very excited about the opportunity.”

On Wednesday, Sergino Dest went the distance for Barcelona in a 2-1 win over Dynamo Kyiv in the Champions League. Barcelona is not playing like the elite and world-class team that has been a hallmark of it in recent decades but it is continuing to win Champions League games. With the win it has a perfect nine points from three games.

This performance wasn’t as impressive as the recent 2-0 away win over Juventus but it still was enough to secure three points.

Sergino Dest, 20, had a decent game although he wasn’t great. His best moments came from plays out wide but wasn’t too dangerous on a consistent basis.  Still, he helped the team get another win and that should continue to have him make appearances – which is very important in his move to this elite level of the game.

Gio Reyna, 17, earned the start for Borussia Dortmund in a 3-0 away win over Club Brugge in the Champions League. U.S. national team backup goalkeeper Ethan Horvath did not get off the bench for Brugge but top goalkeeper Simon Mignolet struggled in this one.

As for Reyna, there were some real quality moments from him but it mostly an average game from him. What is impressive, however, is that if this is the floor for him, this is a really high floor. He can still have an average game for him and have it to be enough to win a Champions League game.

McKennie, Adams, and the rest in Europe

Elsewhere across the board in Europe, there was some noteworthy performances – mostly off the bench.

Tyler Adams made some very important defensive plays down the stretch as he played the final 15 minutes for RB Leipzig in a 2-1 win over a 10-man Paris St. Germain. Adams continues to work his way back into regular minutes following a back injury and in this one, he looked sharp and ready for more minutes.

Henry Wingo played a full 90 for Molde which loss 4-1 to Arsenal on the road in the Europa League. Molde took a 1-0 lead in this one and had it 1-1 at the half. In the second half, Arsenal simply took over.

Lille defeated AC Milan 3-0 in the Europa League but Tim Weah went as an unused sub in the win.

Duane Holmes played the final 18 minutes for Derby County in a 1-0 loss to QPR in the Championship. Former U.S. national team defender/midfielder Geoff Cameron went the distance in the win.

Colorado off to the playoffs

It is hard to not feel happy for the Colorado Rapids for qualifying for the playoffs following a big 1-0 upset win over the Portland Timbers midweek. Colorado was a team many figured wouldn’t be in the mix but started to play following MLS is Back. Then a COVID-19 outbreak within the team shut it down for a month and the team looked lost in its first few games back.

But following a win over Seattle and now Portland, Colorado is back into the post season. Robin Fraser is doing a great job with this team – which is reliant on young players such as Sam Vines, Cole Bassett, and Jonathan Lewis.

Two teams that have been impossible to predict in 2020 gave us a wild result – as San Jose, playing with 10 players since the 61st minute, clinched just its second postseason berth since 2012 with a 3-2 upset win over LAFC. Christian Espinoza was the MOTM with a goal and an assist while U.S. international Jackson Yueill was the player sent off.

A particularly noteworthy story is the rise of JT Marcinkowski in this game. The U.S. U-23 starting goalkeeper has been a big asset for the team as it has impressed since early September.

FC Dallas got a bit lucky in a 1-0 win over Nashville and, despite struggles a few weeks ago, is in a position to earn the right to host its playoff opener. Its schedule hasn’t been too challenging and a long playoff run is questionable. But the team has some newfound confidence and it will have a bit of test on Decision Day on a visit to Minnesota.

The winning goal was controversial as it looked like Ryan Hollingshead was offside on the play and VAR might not have had the best angle to overturn the play on the field. The pass from Jesus Ferreira to Hollingshead was very classy and Ferreira has been doing relatively well in a more withdrawn midfield position.

It had been obvious for a while, but the LA Galaxy are out of the playoffs after a 1-1 draw with a Seattle team that hasn’t been playing as well as it typically does to end a season. Chicharito scored his second goal of the season and the Galaxy will need much more from him next season. A late goal from Raul Ruidiaz evened the game for Seattle and mathematically ended the Galaxy’s hopes for a playoff spot.

The Galaxy will be a very interesting story in the offseason. Can it rebuild quickly? It has so much money tied up in existing designated players that a quick fix is unlikely. Can it finally draw from its academy?