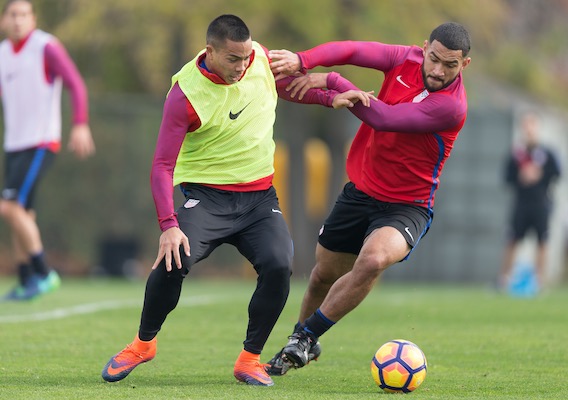 Injuries have depleted Bruce Arena's back line but two young defenders stepped up over the weekend, delivering noteworthy performances in crucial matches. Here's a look at the biggest stories from overseas.
BY Brian Sciaretta Posted
September 26, 2017
7:30 AM

WITH PLAY IN LIGA MX suspended due to the recent earthquake and Premier League players Danny Williams and Geoff Cameron out due to injury, it would be fair to expect a slower weekend for Americans abroad. Surprisingly, however, the weekend turned out to be quite eventful.

The biggest area for concern with the national team right now is in central defense which was the most significant underperforming area in the recent qualifiers. And with John Brooks currently injured and Cameron trying to return (along with Matt Besler taking a vicious knock on Sunday for Sporting Kansas City), other players need to step up.

Fortunately for Bruce Arena and U.S. fans, Matt Miazga turned in his best performance in a long time for Vitesse in a stunning 2-1 away win over Ajax in Amsterdam. Then, Cameron Carter-Vickers started for Sheffield United in a 4-2 away win over archrival Sheffield Wednesday. In MLS, Justen Glad also came up big. So the kids are answering the call at the moment in central defense.

Here is a quick roundup of the weekend's top stories.

Miazga, 22, sacrificed a lot by playing for the United States at the 2017 Gold Cup. He only saw limited minutes in the tournament but in doing so missed the preseason for Vitesse. That saw him start the season riding the bench. But when he got the chance to start, he has made the most of it. Judging by this past weekend, it will be very hard to justify taking him out of the lineup.

On Sunday Miazga earned the start for Vitesse at Amsterdam Arena against perennial Dutch power Ajax. The New Jersey native played so well in a 2-1 win he earned Eredivisie Team of the Week recognition by top Dutch publications

How good was Miazga? Well he was credited with an astonishing 14 clearances in the game which was eight higher than the next-best player in that category.

With all of the injuries and uncertainties to the backline, Miazga could very well force Arena’s hand for a call-up for the do-or-die qualifiers in October. If Cameron is out injured and Besler’s injury on Sunday is serious, Miazga is probably the best performing central defender available at the club level.

Carter-Vickers puts on a show

The Steel City Derby between Sheffield United and Sheffield Wednesday is one of the oldest and most intense games in English soccer. The two teams met on Saturday and Cameron Carter-Vickers got the start for visiting Sheffield United.

The game lived up to its billing with both teams playing a back-and-forth game that saw United prevail 4-2. Carter-Vickers went the distance playing on the right side of a three-man backline.

It wasn’t a game for defenders to shine but Carter-Vickers had some nice moments, winning most of his aerial challenges, making eight clearances, and completing 75% of his passes. He was, however, beaten a few times and committed four fouls. Still, it was a great experience for the American teenager to play in an important and historical game and emerge victorious.

Carter-Vickers is showing that he still has a huge upside and what is needed now is to shake off the rust after 12 months where he sat on Tottenham’s bench. Sheffield United looks like a great place to do that and the old club looks like it could be in the promotional hunt this year as it currently sits in fourth place.

It was a bittersweet weekend for American attacker Lynden Gooch who earned the start for Sunderland at home against Cardiff in the English Championship.

Gooch, 21, played well in the game drawing a penalty and then converting to tie the game. Unfortunately for the Santa Cruz, Calif. native, Cardiff found a late winner to send Sunderland to 22nd place. Fresh off of relegation out of the Premier League, Sunderland could be in line for a second straight relegation fight.

It's worth noting that Gooch was the best player on the field for Sunderland. Playing as a forward, he completed nearly 85% of his passes and had three shots which included the goal. He was also fouled three times, including the penalty, and nearly had an assist.

Gooch will likely get more playing time and Sunderland will be counting on him to help the club stay in the Championship next season.

On Sunday in the Premier League, DeAndre Yedlin got the start for Newcastle and went the distance in a 1-0 away loss to Bright & Hove Albion. Yedlin, 24, was decent but unspectacular in the game. His defense was solid but he didn’t really get involved with the attack.

Toward the end of the match Yedlin drew a foul and Brighton’s Tomer Hemed stomped on the back of Yedlin’s leg when the American was down.

Afterward Brighton manager Chris Hughton insisted it was an accident although video replays could be interpreted otherwise. Hemed also scored the game’s only goal.

"All I can do is give you my opinion,” Hughton said. “And that is that there's certainly no intent.”

Afterward, Hemed apologized to Yedlin but he still might be facing a suspension from the disciplinary committee with some reports saying a three-game ban is on the table.

Americans Fabian Johnson and Christian Pulisic were in the starting lineup for their clubs on Saturday when Borussia Dortmund hosted Borussia Monchengladbach.

For Johnson, it was his first Bundesliga start of the season but it turned into a nightmare as Dortmund cruised to a 6-1 lopsided win. Johnson marked Pulisic for a while but no one looked good for Monchengladbach.

Pulisic played 64 minutes in the win and was dangerous despite not getting a goal or registering an assist. Fabian Johnson went 72 minutes and while the start was nice, 2017 continues to be a rough year for Johnson for both club and country.

Terrence Boyd, 26, might not play as much has he would like these days but on Sunday he was part of a tremendous comeback for Darmstadt.

Trailing Dynamo Dresden 3-1 at home in the 90th minute, Boyd scored to pull Darmstadt closer and then minutes later, teammate Tobias Kempe found an equalizer to help Darmstadt salvage a point in a 3-3 draw.

The draw lifted Darmstadt to fourth place in the 2.Bundesliga. Boyd's strike will only help his case for more minutes in the weeks ahead.