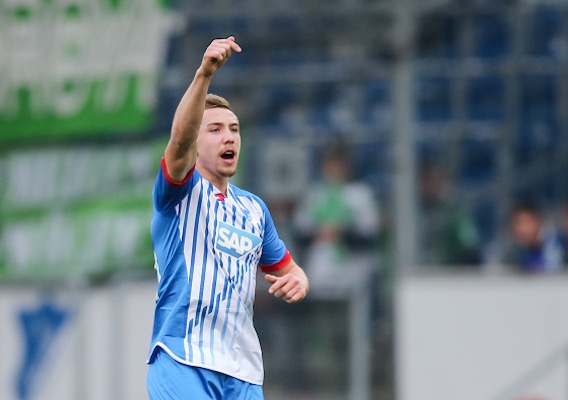 Russell Canouse came on as a second-half substitute for Wolfsburg; 18-year-old Matthew Olosunde signed with Manchester United; and Perry Kitchen made his Hearts debut in a busy weekend for Yanks.
BY Brian Sciaretta Posted
March 14, 2016
9:45 AM

FABIAN JOHNSON, Edgar Castillo, Geoff Cameron and other veterans performed well over the weekend, but the big news for American soccer fans is that the next generation of Yanks Abroad are stepping into the spotlight.

Russell Canouse, 20, is one of the most promising American prospects in Europe. When injury forced him out of the 2015 U-20 World Cup (where he would have likely been captain), it was a huge loss for the squad.

During midweek, Hoffenheim announced that Canouse would be promoted to the first team in large part due to injuries within the squad. Hoffenheim has been in the relegation zone for large portions of the season and on Saturday the 17th-place club faced a difficult task against Wolfsburg.

Hoffenheim was up 1-0 in the 67th minute when Canouse came into the game. The defensive midfielder from Lancaster, Pa., helped his club hold onto the lead and earn three points.

Relegation battles are usually tough situations for young players but the fact that Canouse made his debut at such an important situation suggests that head coach Julian Nagelsmann rates the American highly.

Over the past two decades, there has been no shortage of American players who have played for the youth teams of very big clubs. Signing with a big club does not guarantee success or even a professional career, but it is worth noting that the current U-20 player pool features many players at the best clubs in Europe.

On Friday, Matthew Olosunde, 18, signed with Manchester United and was immediately eligible to play for the club’s U-18 team. The New Jersey-born fullback was previously in the New York Red Bulls' youth system. It's likely that Olosunde will play a role with Tab Ramos U.S. U-20 team moving forward.

Ramos' likely core consists of Christian Pulisic at Borussia Dortmund; Cameron Carter-Vickers at Tottenham; Erik Palmer-Brown at Porto; Mukwelle Akale at Villarreal; Brooks Lennon at Liverpool; Joshua Perez at Fiorentina; Kyle Scott at Chelsea; Gedion Zelalem on loan at Rangers but still property of Arsenal; Haji Wright at Schalke; and now Olosunde is the second U-20 player at Manchester United along with Joshua Doughty.

There are plenty of promising players from this age group still in MLS, college, and Mexico so it will be interesting to see how Ramos puts this team together and if it can live up to the promise ahead of the World Cup next summer.

Given that he's a mainstay for Jurgen Klinsmann with the full national team, it's easy to forget that John Brooks is eligible for the U.S. U-23 team and it's possible that he will play for Andi Herzog this month in the two Olympic qualifiers against Colombia.

Many consider Fabian Johnson to be the best American player at the moment—I voted for him at the top of the latest ASN 100—but there's a growing case to be made for Brooks as the first choice. Those who watched Friday’s 2-0 win over Schalke understand why.

Brooks, 23, was one of the best players on the field in the win and his strong showing could not have come at a better time. Both Hertha and Schalke are in a tight race for a Champions League spot and the three points moved Hertha into third place, giving the club a four-point cushion on Schalke.

Brooks has been a consistent force all season—a sure sign that he is maturing as a player.

Paul Arriola, 21, has been a regular presence off the bench for Tijuana, making 19 substitute appearances dating back to last summer. On Saturday, the Chula Vista, Calif., native earned his first start for Tijuana and went the full 90 in a 2-1 away win over Jaguares. The win moved Xolos into eighth place—which is the league’s final playoff spot.

Arriola had a very solid U-20 World Cup last summer, making important defensive contributions in addition to his established offensive work. He has found it hard to be part of the U-23 team but don’t be surprised if Herzog selects him for the Olympic qualifiers against Colombia this month.

Similarly, U.S. U-23 central midfielder Luis Gil earned the start and went a full 90 on Saturday for Queretaro against second place Leon. Unfortunately for Gil, his side lost 2-0 to the favored guests (and American goalkeeper William Yarbrough picked up the clean sheet) but Gil had some very nice moments and is well-positioned to start for the U-23 team against Colombia.

Perry Kitchen made his Scottish Premier League debut on Saturday for Heart of Midlothian in a 1-0 away win over Dundee. With Hearts leading by a goal, Kitchen came on in the 73rd minute to help secure the victory.

Kitchen, 24, completed the move to Hearts last weekend and signed a two-and-a-half year contract. It is an interesting move for the Indianapolis native who spurned a reportedly lucrative offer from D.C. United and chose instead to sign in Scotland—a league that has been on the decline in recent years.

Will Kitchen be able to perform well for third place Hearts and then move to a bigger league in Europe? Perhaps. The “steppingstone” argument of moving out of MLS and into a medicore league as a springboard to a top league has only found limited success for American players. (Michael Bradley succeeded in doing so.) Most players who leave MLS and end up in a top league did so in a direct manner, not via a steppingstone.

Kitchen, a toughminded player, will no doubt try to buck the trend.

Will Wood attract offers this summer?

On Saturday Bobby Wood scored his 13th goal of the 2.Bundesliga season, this one coming from the penalty spot in a disappointing 2-1 loss to last place Duisburg. The goal lifted Wood into third place on the league's scoring charts and left him one tally shy of Conor Casey’s scoring record by an American in the top two tiers of Germany.

The 23-year-old's stock has never been higher than it is right now, thanks in some part to his ability to stay healthy for Union Berlin, which is in 10th place in Germany's No. 2 league.

The Honolulu native has scored eight goals in his last eight games and has found his way onto the scoresheet in five straight. If he continues this run, he will likely attract interest from clubs that will be able to make offers Union Berlin can’t refuse.

It will be interesting to see if Wood can continue this great run of form in the upcoming World Cup qualifiers and in the Copa America Centenario in June.