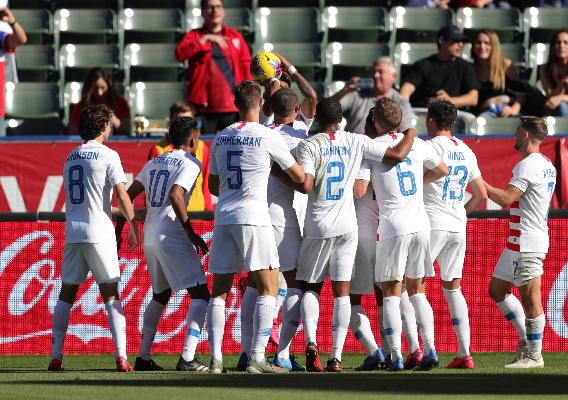 Yes it was a low-scoring game, but this January camp felt more productive and refreshing than the "preseason" nature of previous editions. It wasn't perfect, but it felt useful in helping build the player pool for the busy year ahead. ASN's Brian Sciaretta chimes in
BY Brian Sciaretta Posted
February 01, 2020
6:55 PM
THE UNITED STATES defeated Costa Rica 1-0 on Saturday afternoon to open a very busy and very important 2020 campaign. While the game was low scoring, it was a fairly entertaining game where manager Gregg Berhalter rolled out a very youthful starting lineup that featured many youthful but promising players who are new to the game.

The U.S. team played well from the start and newcomers Jesus Ferreira and Ulysses Llanez provided a spark to the offense. The team, however, failed to convert many of its opportunities. Paul Arriola was denied by Costa Rican keeper Esteban Alvarado in the first half and Brendan Aaronson missed a shot just wide.

Costa Rica nearly scored against the run of play in the 20th minute when captain Giancarlo Gonzáles had an open header from close range but hit it off the crossbar.

In the 50th minute, the U.S. team finally broke through. On the play, Paul Arriola played Reggie Cannon into a dangerous position in the box and Cannon was brought down with an obvious foul. On the ensuing penalty, Llanez elected to take it and sent it to the low left corner while Alvarado guessed the wrong direction.

For the remaining 40 minutes, the U.S. team generally had the better chances and the better edge in possession. But with the wave of substitutions, the game became a bit disjointed. Gyasi Zardes appeared to give the U.S. team a 2-0 lead in the 87th minute with a header from a Lletget cross, but he was correctly ruled offside.

Despite the low-scoring nature, the game was productive in that several young players were given a fair chance to make their case. Of course, finishing wasn’t great and the face that many of the players are in preseason form attributed to that. But if this camp was about expanding the player pool and having young players “stake their claim,” this game pointing to January camp being successful.

Here are a few thoughts on the game

Olympic qualifying will be this camp’s legacy


In total, nine players who appeared in this game for the U.S. team were eligible for the U.S. U-23 team. The U.S. team hasn’t qualified for the Olympics since 2008 and it is priority to get the team to Tokyo – despite the fact many of the top age-eligible players won’t play in March’s qualifying tournament.

Olympic qualifying is tough. Only two teams make it from CONCACAF (compared with four teams for the U-20 and U-17 World Cups or three/four for the senior World Cup) and often it comes down to a must-win semifinal game.

Many of the players who were in action on Saturday against Costa Rica will comprise of the core for Jason Kreis and his Olympic qualifying team. One of the reasons why this camp was so young is that it was geared towards preparing for Olympic qualifying (and it’s why there was no set U-23 camp this month).

If the U.S. team qualifies for Tokyo and these players are the core, this camp will be viewed as a success. If not, questions will linger as they did the previous two cycles. But at this point, the team seems to be in a pretty good place.


The debuts of Llanez and Ferreira were two of the most exciting stories of the game. Both players were part of multiple scoring chances. For Llanez, his penalty conversion only told part of the story. He was very active on the left side and Sam Vines at left back did well to play in into dangerous positions.

For Ferreira, this debut was a long-time coming. The U.S. U-23 and U-20 teams have all called him up prior to him getting his citizenship. For FC Dallas, he looked very strong at times last season when he surpassed 2000 minutes before his 18th birthday.

Between those two, there was a lot of aggressiveness and creativity on the field. It was a glimpse of how the U.S. team could look like in the future although both will probably focus on the U-23 team in the coming months (Llanez is actually eligible for the 2021 U-20 team and the 2024 U-23 team while Ferreira misses the cutoff date by both of those teams by a week).


Last year, Reggie Cannon made a lot of strides for club and country. He anchored an FC Dallas backline and was given more and more responsibility from Gregg Berhalter with the U.S. team. Coming into 2020, it was only fair that the bar be raised for Cannon and the expectations increase.

With the Costa Rica, Cannon is off to a strong start and the Texan was probably the best player on the field over the course of 90 minutes. Not only did he draw the decisive penalty, but he was effective with his runs and passes. Defensively, he was quiet but steady.

It would hardly be a surprise if he is the U-23 team captain at Olympic qualifying. He hasn’t played with the U-23 team yet, but no player likely on that roster has his experience and on the field he plays with a maturity beyond his years.

He’s another success story for the FC Dallas pipeline and a player who could be sold sooner than later.