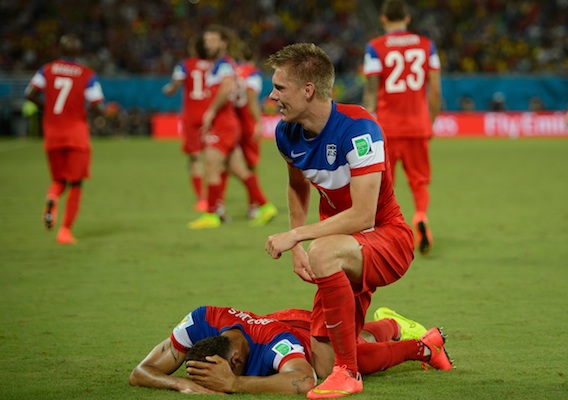 Mix Diskerud and Joe Corona both hobbled off the field over the weekend, but Brian Sciaretta found some encouraging news in his weekly roundup of Americans playing soccer abroad.
BY Brian Sciaretta Posted
October 20, 2014
10:46 AM

In what was easily the best story of the weekend for Americans playing abroad, Geoff Cameron returned from hernia surgery to make his first Premier League appearance of the season. In a rather surprising role, Cameron was subbed on in the 61st minute to play in central midfield and he was terrific from the start in completing all 15 passes he attempted. In the 76th minute, Cameron forced an interception and made a quick pass into the final third on a sequence that eventually resulted in a Jonathan Walters game-winning goal for Stoke.

Terrence Boyd returned for RB Leipzig on Friday, making a 61st-minute substitute in a 1-0 loss to Nurnberg in the 2.Bundesliga. He has been missing from action since July 28, when he suffered a partial tear of his ACL. RB Leipzig only earned promotion into the 2.Bundesliga this season but the well-financed club is ambitious with sights set on a second consecutive promotion to the Bundesliga. Now in fifth place, Leipzig is only two points out of second place.

Similarly, Aron Johannsson is very close to his return at AZ Alkmaar. Johannsson, 23, hasn’t played since the United States' June 16 World Cup opener against Ghana and has undergone two surgeries—one to his ankle, another to his groin—since that time. On Monday he is scheduled to play for AZ Alkmaar’s reserve team, which should give observers some sense of his match fitness. AZ Aklmaar can use all the it can get: Following a lopsided 3-0 loss to PSV over the weekend, the club to ninth place currently resides in ninth place in the Eredivisie. Both of these updates will be welcomed by United States national team coach Jurgen Klinsmann, who has had limited options at forward over the last few months.

Brooks out of the doghouse

Less than three weeks ago John Brooks was demoted to Hertha Berlin’s reserve team after being called out publicly by head coach Jos Luhukay. On Saturday, the 21-year-old made his return to the senior side, coming on as a 70th-minute substitute in a 2-0 loss to Schalke. Brooks has a talent to burn—enough that he is capable of working his way back after run-ins with his coach. It certainly appears that Hertha thinks that that the best way to manage Brooks is with lots of tough love.

At the beginning of the 2014-15 2.Bundesliga campaign, few expected Ingoldstadt to contend for promotion into the top flight. After 10 games, however, the small Bavarian club sits in first place with a four-point cushion. Alfredo Morales has been an instrumental part of the team’s success and on Saturday he put on another solid shift in the midfield in a full 90 effort for three valuable points on the road.

Rubio Rubin gets vote of confidence

It's not often you hear foreign managers rave about American teenagers but that is exactly what Utrecht manager Rob Alflen did.

“Rubio is a typical American striker," Alflen said. “And with that I mean that he moves around the field a lot and covers big distances every single game. He’s way different than, for example, Dutchman Ruud Boymans, one of our other strikers.” “That’s the role he had in our games against FC Twente and Go Ahead Eagles. I don’t consider Rubio a No. 9 or a No. 10 but more like a No. 9.5, as he can play on both positions....It is incredible what Rubio, being just 18 years old, already shows on the pitch and so is the progress he makes. Rubio is a man on a mission. He walks around like he is already 25 years old—very impressive.” Utrecht defeated FC Dordrecht by 1 3-1 margin on Sunday. Rubin started and played 56 minutes.

On Friday, Cork City FC moved into first place in the League of Ireland following a 1-0 win over Bohemians and a draw by previous leaders Dundalk. With one game to go in the season, Cork City will visit Dundalk on Friday needing just a draw to clinch the Championship. Cork City is managed by Bronx-native John Caulfield who, along with Bob Bradley at Stabaek, are the first two American-born head coaches of top-flight European teams. Caulfield has already become the first American coach to qualify a team for European play and he now looks to become the first American to coach a team to a European title. Brian Sciaretta is an American Soccer Now columnist and an ASN 100 panelist. Follow him on Twitter.