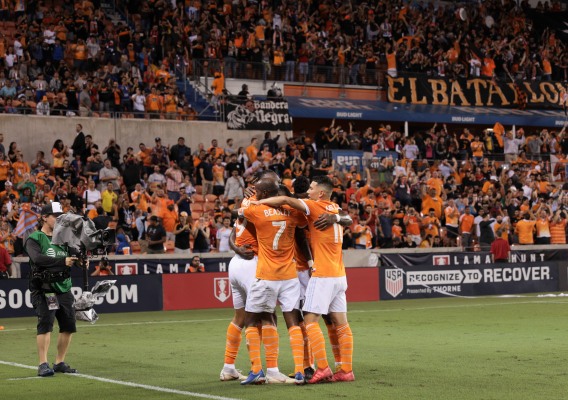 DaMarcus Beasley added another item to his incredible resume while Christian Pulisic is playing his best soccer of the year. Meanwhile, high-flying Atlanta United could see a massive shakeup this offseason. Brian Sciaretta breaks it all down for you
BY Brian Sciaretta Posted
September 26, 2018
6:45 PM
THE PAST FEW days have seen a wave of midweek action both domestically and abroad that has brought about impressive highlights and interesting stories.

Pulisic is on fire


Christian Pulisic may not have played for the U.S. team in September (or much in 2018) but his form the past few weeks for Borussia Dortmund has been fantastic. It is easily the sharpest he has been for the club in awhile.

Last week he scored a late winner for Dortmund in a 1-0 win over Club Brugge in its Champions League opener. Then over the weekend he scored a late equalizer in a 1-1 draw with Hoffenheim. On Wednesday, he made a beautiful assist in a 7-0 rout over Nurnberg.


Jacob Bruun Larsen scores his first goal for Dortmund, but what about that set-up from Christian Pulisic? ????

What an assist from the American! pic.twitter.com/Tb1BbCEMyL


The Houston Dynamo has been tough to watch in recent years and there really hasn’t been much to get excited about with the team. The team’s academy has been non-existent despite being located in what should be a soccer hotbed. There isn’t much of an American presence on the team and there just doesn’t seem to be any real identity.

But Houston got hot in the U.S. Open Cup and defeated an upstart Philadelphia team 3-0 in the final. Houston will now participate in the CONCACAF Champions League.

The Union, however, appear to at least have a direction. I’s academy is turning over U.S. youth internationals on a regular basis and young domestic players are earning real minutes. Head coach Jim Curtin has done a nice job and Philadelphia is almost assured of a participating in the playoffs this year.

The one thing that does deserve applause on Houston is DaMarcus Beasley who is one of the greatest American players of all-time. He has had a groundbreaking career for an American player that is full of accomplishments and his win on Wednesday just adds to his incredible resume.


According to various reports, Tata Martino will not coach Atlanta next year and could be in line for the Mexican national team coaching job (or the Colombian national team).

The Mexican coaching job is tough for anyone because Mexico always seems to defeat itself in the end. There is always quick turnover in that role, there is never any patience among supporters or those inside the federation, and the manager is always unpopular.

For Atlanta, the team is in first place but is facing a tumultuous winter with the likely loss of Martino, Miguel Almiron, and Josef Martinez. Meanwhile, the expensive Ezequiel Barco has not worked out at all. Carlos Bocanegra and company in the Atlanta front office have a ton of work to do.

Amon scores in a Cup matchup


Jonathan Amon, 19, is quite the prospect and it will be fun to watch him in the years ahead potentially with the U-20 team, the U-23 team, and the national team. Right now he is a high impact player for FC Nordsjaelland in Denmark and seems to get either a goal or an assist most games.

On Wednesday, Amon did it again when he scored Nordsjaelland’s second goal in a 4-0 win over Koge in the Danish Cup.


The English League Cup isn’t always the best gauge of where players stand within clubs because clubs don’t always treat it with great importance.

That being said, Fulham’s 3-1 win over Millwall was important on two levels for Americans.

The first is that Tim Ream took his first steps back from injury after being named the player of the season as the club won promotion back to the Premier League. The St. Louis native started in the game for his season debut.

Also, Luca de la Torre, 20, made a big statement with a goal and an assist where he was probably the team’s best player in the game. A veteran of the 2015 U-17 and 2017 U-20 World Cups for the United States, de la Torre is talented player but needs these types of performances in the spotlight to either get playing time with Fulham or force a loan/sale to another team.


Luca de la Torre scores for #FulhamFC to double the lead against Millwall in the #CarabaoCup Third Round.