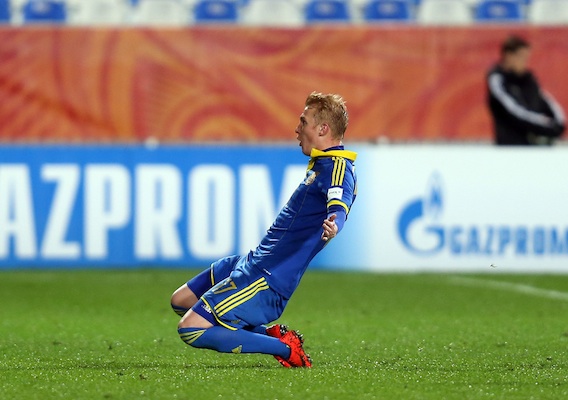 Rather than build on its impressive 4-0 win over New Zealand, Tab Ramos' U.S. U-20 played it safe against the Ukraine, and suffered a demoralizing loss in the process. The Yanks finished second in Group A.
BY John Godfrey Posted
June 05, 2015
8:40 AM

THE UNITED STATES MEN'S UNDER-20 TEAM didn't need to win Friday morning against the Ukraine—Tab Ramos' men had already punched their ticket to the knockout round of the World Cup and only required a draw to finish atop Group A.

Still, after victories over Myanmar and New Zealand—neither team what you would call a world power—a positive result against a proven European side would have validated the Americans' efforts in New Zealand.

Although the game remained scoreless through the opening 45, you could see trouble brewing for the Americans from the onset. Ramos, perhaps looking for the draw he needed to win the group, rested his best attacker, Rubio Rubin, and positioned Bradford Jamieson alone up top in a 4-5-1 formation. (The lineup card may have said "4-4-2"; it was not.) The slender Los Angeles Galaxy forward struggled badly in the role.

A Ben Spencer or Andrija Novakovich may have been able to man the target forward position with some success but neither is with the U.S. U-20 team at this tournament. A feisty Maki Tall might have, too, but he is injured and will miss the rest of the World Cup. Instead, Jamieson was tasked to play a role he is ill-suited for and the rugged Ukrainian defenders dispossessed him easily.

With no way to alleviate the Ukraine's midfield pressure, the Americans spent the first interval defending in their own half.

Why the U.S. elected to cede all possession to the Ukrainians is a mystery, but the Yanks did not play a high-pressure game and their opponents walked the ball over the center stripe repeatedly and with impunity. The bunker-and-counter gambit kept the game scoreless through the first half, but it also seemed to demoralize a group of players who love to attack with the ball at their feet.

The game tilted on its axis in the 56th minute when Cameron Carter-Vickers gently nudged Kovalenko 20 yards away from goal in the center of the pitch. Shrewdly, or perhaps cynically, the 19-year-old Shakhtar Donetsk attacker went to ground and referee Eric Otogo-Castane called for a free kick. Kovalenko then lifted a beautiful strike over the United States' four-man wall and placed it in the left corner of goal, just beyond a diving-yet-helpless Zack Steffen.

After all of that passive play, the U.S. still trailed 1-0 and now had to change gears to get back into the match.

Two minutes later, it nearly did.

U.S. midfielder Jordan Allen was dribbling down the left side of the Ukraine penalty area when he appeared to slip and fall. Otogo-Castane inexplicably called a penalty on the play, and it looked as though the undeserving Americans were going to be level again.

Only it didn't work out that way. Captain Emerson Hyndman stepped up to take the penalty but his poorly placed, waist-high shot did not trouble Ukrainian goalkeeper Bohdan Sarnavskyi, who batted it away easily.

If the U.S. was going to get a result and win the group, it was going to have to earn it. And the team never came close to doing so.

Surprising absolutely no one, Ramos' men immediately began to push forward in numbers, taking chances in the attacking half and opening up space in the back. The Ukrainians easily absorbed the pressure, countered, and scored straightforward goals in the 74th and 79th minutes.

With five goals in three matches, Kovalenko leads all scorers in the tournament.

Hyndman and Gedion Zelalem, who looked fantastic against New Zealand a few days prior, could not impose their will on the contest. The explosive Rubin, who came in at the 67th minute mark, never got untracked. With Matt Miazga on the bench, the defense lacked the cohesiveness it had displayed previously.

Only Paul Arriola managed to make a positive impression, pushing forward with pace and energy at every turn.

It wasn't nearly enough, however, and the Americans will have to wonder if they should have attacked the Ukrainians and played for the win rather than trying to eke out a draw.

With the Round of 16 up next, the United States will face the second seed from Group C, to be decided tomorrow: Colombia, Portugal, or Senegal.