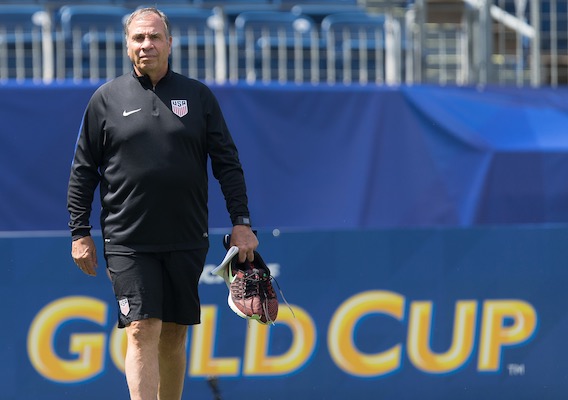 Arena on Panama Game: "I Am Not Jumping for Joy"

The U.S. men's national team stumbled against Panama on Saturday and the coach was not thrilled with what he saw. The Yanks will try to correct some mistakes against Martinique on Wednesday.
BY Brian Sciaretta Posted
July 11, 2017
4:25 AM

ON THE HEELS of a disappointing opening draw to open the Gold Cup, the United States national team is back at work in Tampa preparing for Martinique on Wednesday night. To win Group B, the U.S. must win on Saturday and try to increase its goal differential to prevail in what many expect will be a tie atop the group

Like Saturday’s opener in Nashville, Wednesday night will be played in high temperatures despite a nighttime kickoff. Arena said that he will make several changes to his lineup because he is also preparing for Saturday’s group stage finale against Nicaragua.

But there was no denying the team disappointed in its opening 1-1 draw with Panama where it struggled throughout—including a brutal 20-minute stretch after Dom Dwyer gave the team a 1-0 lead in the 50th minute.

Arena faced the media on Wednesday and took the blame.

“We didn't play well and I have to accept that responsibility. We'll get it better on Wednesday,” Arena said. "There's not a whole lot I would say I was pleased with. I thought our goalkeeping was very good. After that I am not jumping for joy. We've got to get a lot of things right.

“I think we will get better with every game,” the Brooklyn native said. “It takes a little bit of time. But there are no excuses for the way we played on Saturday. We have to play better than that.”

As for what to expect from Martinique, Arena acknowledged that Wednesday’s opponent’s impressed in its 2-0 win over Nicaragua on Saturday. He expects a confident team that will be organized in the back, comfortable in the high temperatures, and focused on getting a draw since one point should secure advancement to the knockout rounds.

“Martinique I saw for the first time on Saturday,” Arena said. “They played very well. They could have won by five goals in that game. They have a couple of good players. It's certainly a team we have to respect and we have to go out and beat. When you have a team that has a win and leads the group, they'll come to Wednesday's game with a lot of confidence.

"Perhaps they're saying that if we get one point out of this, we're advancing out of this tournament. I am sure they're working collectively to have a strong defensive posture against us.”

On Saturday, Arena made just two changes from the previous week’s friendly win over Ghana. Playing on only three days of rest, expect more changes.

A few players will remain. Brad Guzan is likely to start sincethe Chicago native has been in top form the first two games of this U.S. camp. With the team needing a win, changing the goalkeeper seems unlikely.

The two best field players are also safer bets to stay. Dom Dwyer has scored in his first two caps. The England native and newly minted American citizen was beaming in front of the media on Monday as it was a homecoming of sorts. Dwyer first began to attract national attention while playing for Tampa’s University of South Florida, where the U.S. is now training. It was during his one-year stint at the USF where Dwyer impressed to become a first round draft pick for Sporting Kansas City in 2012.

“It's really nice to be here,” Dwyer said. “It brings back a lot of good memories. It's a really cool experience. It's a little bit surreal. I didn't think I would be here. Six years ago you could have told me I would be here and I wouldn't have believed you.”

The other player is New England’s Kelyn Rowe who has showcased himself well in his first two U.S. appearances. Rowe has been one of the team’s most aggressive players so far and has been looking to make game-changing plays. While his defense has been lacking, Arena says things look bright for Rowe so far.

“Kelyn has to grow and understand how to play the game at this level,” Arena said. “But certainly, individually, he's got some tools. He's a tricky player. He's a skillful player. There's some other things he's got to get right but it's been a good first couple of weeks for him with the U.S. team.”

Dwyer agreed that Rowe has been a boost for the team’s offense.

“I've been with impressed with him the last couple weeks in training,” Dwyer said. “You can see right away that he looks very good at this level. We seem to be linking up well. So hopefully there is more of that.”

Arena has stressed he wants to see the team put on an improved performance from Saturday. He also expects an opponent to play with a highly organized and defensive approach.

Perhaps a shift to a 4-4-2 formation might make sense to give Dwyer a partner in the box. If that's the case, Juan Agudelo might make sense with his strength, technical ability, and skill in the box. Alejandro Bedoya did not impress on Saturday and opting to go with Paul Arriola on the right side might also be logical as Arena trusted the youngster with a recent start against Mexico.

The central midfield trio of Dax McCarty, Kellyn Acosta, and Joe Corona will also likely be tinkered with. One will naturally be dropped if there is a switch to a 4-4-2. The mostly likely inclusion would be Crisitian Roldan who is fresh after not participating in the first two games. Meanwhile McCarty, a native of nearby Orlando, seems like the most likely player to remain in the starting lineup.

The fullbacks are tough to call. If Martinique is going to be compact, the U.S. will needed good crossing. Graham Zusi can do that but he had a rough game on Saturday. Jorge Villafana played well but could be fatigued the opener.

So here is one potential lineup we might see on Wednesday.

What do you think of Brian's take, and his Starting XI? Leave your comments below and create your own XI.