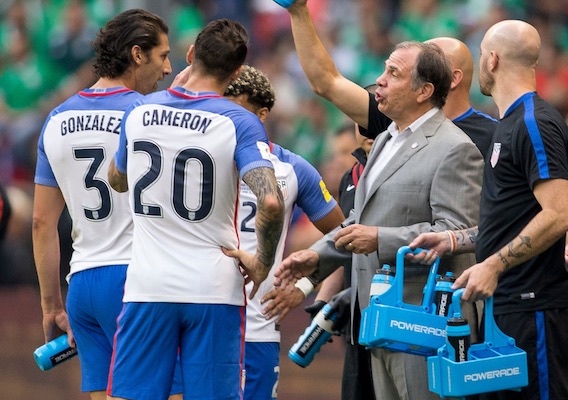 The former LA Galaxy coach inherited a national team in disarray but now the Americans are organized, re-energized, and on the path to qualify for the 2018 World Cup in Russia.
BY Noah Davis Posted
June 12, 2017
2:00 AM

The manager, hired after the November ouster of Jurgen Klinsmann, knows his players and is figuring out how to put the pieces together. On Sunday night, he passed his latest test, installing seven new starters as the Americans drew 1-1 with Mexico. The team got an early goal from Michael Bradley when the captain stole a pass from Javier Hernandez, took two touches, and lofted a 35-yard ball into the Mexican net. After the match, Bradley said he was prepared to pick off the pass because of film study.

"We watched a lot of video with some of their movements," he said. "We knew that at certain moments, Chicharito was looking to come to the ball... I felt like I was able to read what he wanted to do and step in. That led to a good goal for us."

Preparation was a theme more players touched on in post-game interviews.

"We just had a short meeting, each person, and I think that really helps a lot," Paul Arriola said. "Everyone really understands what their role is and what the team role is."

"We had the lineup and we knew what our jobs were," Man of the Match Geoff Cameron offered. "And we did that. We implemented it perfectly."

And then there was Kellyn Acrosta. "I think we are becoming more united, you can see everyone battling for each other," he said. "You need results like this to build on."

A growing sense of unity was another theme in addition to the one about preparation. Arena is working hard to create this atmosphere. "The older players who weren’t on the field were very supportive of their teammates," he said. "This is critical. I've tried to provide the environment that I think is right for a national team program. That's what I did when I started in January."

Bradley, thoughtful and honest, explained how the attitude under Arena is s different than last year.

"You guys heard me say it a lot at the beginning of this year that at the end of last year, a lot of little things started to drop," he said. "When we get our blend right in terms of football, physicality, athleticism, mobility, speed, mentality, spirit, when we get that right, there aren't too many teams in the world that are going to have easy days playing against us. We feel like we can step on the field and beat anybody.

"But if a few too many areas start to come down, we're also honest enough with ourselves to understand that our margin is not real big and then we're going to start to put ourselves in some difficult spots. For me, it was the case at the end of last year that a few too many areas started to drop. I think Bruce has done a very good job at coming in and little by little, getting every... just raising the level across the board. A big part of that is this idea of team, of spirit, of mentality, of balls."

In four qualifiers, Arena turned the team around. The U.S. are now heavy favorites to qualify for the World Cup in Russia, something that wasn't true after the disastrous start to qualifying. The game in Azteca, where young and inexperienced players stepped up and fit in, could have been a U.S. victory. The Americans didn't get three points, but they got something more important: belief.

"The group has been great, definitely a change in atmosphere for sure. It's just positive, guys are clicking right now, and it’s a good thing," Cameron said. "It’s good to be a part of a result like this."

The star center back continued: "Now us European guys can sit back and relax, have a few Coronas, and get back into it in July."

Noah Davis is a New York City-based writer and the Deputy Editor of American Soccer Now. Follow him on Twitter.