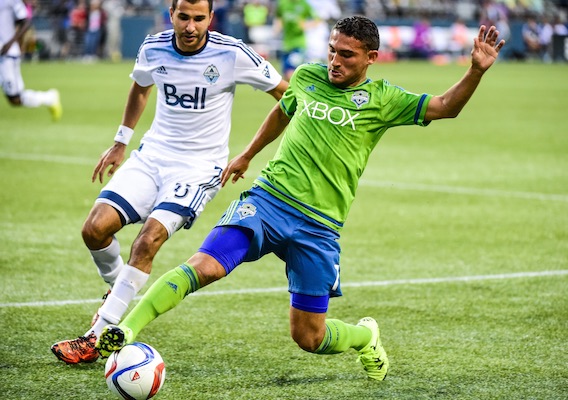 A new crop of youngsters are poised to make a big splash in Major League Soccer season. Here, ASN's Brian Sciaretta offers up a list of eleven would-be stars who are worth keeping an eye on in 2016
BY Brian Sciaretta Posted
March 11, 2016
10:00 AM

CYLE LARIN started 24 matches and scored 17 goals for Orlando City SC in 2015, earning rookie of the year honors in the process. But the Canadian striker wasn't the only young player to make noise in Major League Soccer last season.

Tim Parker earned a January camp call-up after an outstanding second half of the season for Vancouver. Matt Polster was one of the lone bright spots for the Chicago Fire and forced his way onto the U.S. U-23 team. And Fatai Alashe also made the U.S. U-23 team based on impressive performances for San Jose.

This is an intriguing moment for MLS because for the first time in its 21-year history the league's homegrown player rules nearly collided with its designated player rules. Seattle forward Jordan Morris played in six senior international contests in 2015—while still attending Stanford University—and secured a hefty rookie contract. His arrival Much will be expected of him and with the loss of Obafemi Martins, Seattle needs Morris to be a productive goal scorer right out of the gate.

Fair or not, there is a lot of pressure and expectations for Morris to perform for his hometown team. It will be one of the key stories to watch in 2016.

Like Morris, Brandon Vincent also starred at Stanford and also has a U.S. national team game under his belt—albeit just one appearance at the tail end of January camp. Still, Vincent is a highly anticipated rookie who plays the coveted left back position. Not a lot will be expected of the Fire in 2016 but Vincent will be a central part of the team’s rebuilding process. Veljko Paunovic, the coach who won the U-20 World Cup for Serbia, is now running the show in the Windy City and will be tasked with managing Vincent's development.

Vincent, 21, has a golden opportunity to make a name for himself. Because of the dearth of left backs in the U.S. national team player pool, a breakout season could see him fast-tracked into Jurgen Klinsmann's team. The German praised Vincent after January camp, and why wouldn't he—Vincent is smart, technically solid, and is extremely fit (word out of January camp is that he won the team’s “beep test”).

“We had a couple surprises,” Klinsmann said in his post-January camp evaluations. “I would say Kellyn Acosta certainly. We were impressed by his level of maturity for an Under-23 player. Brandon Vincent as well.”

Last season Sean Davis saw limited minutes for a very good New York Red Bulls team, buried on the bench behind veterans like Sacha Kljestan and Dax McCarty who were remarkably healthy throughout the season. In the 564 minutes Davis did play, he exuded strength and confidence.

This year, however, Davis is one to watch closely as the Long Branch, N.J. native is expected to take on a bigger role.

“I think we've said pretty much from day one that Sean Davis is the guy that, at any team in MLS he'd probably be a starter,” Kljestan said recently. “It's unfortunate for him that we have such a good midfield, but he's been pushing guys every day in training, he comes to training with the best attitude, he works hard, and he's going to have a lot more time to play this season and I'm sure he's going to shine.”

The Red Bulls organization always seems to produce young American talent. Matt Miazga is the latest in a long line that includes Tim Howard, Jozy Altidore, and Juan Agudelo. Will Davis follow in their footsteps?

Cristian Roldan played nearly 1,200 minute in 2015 for the Seattle Sounders. The rookie midfielder was a significant and surprising omission from last year's United States U-20 World Cup team but still emerged as one of the better American players from that age group.

Versatility is a key asset for the 20-year-old from Artesian, Calif., who played all across the midfield in 2015 but will likely settle down in a box-to-box role in 2016. Seattle head coach Sigi Schmidt likes Roldan and expects he will be a big part of the team’s future as the aging Sounders look to feature younger talent.

"It's going well for me," Roldan said of his 2016 preseason. "I am starting to settle down on the No. 6 position and establish myself as a professional. It's very hard with these guys we have, but I am getting there. It's great for me, especially as a younger guy that I get to learn from these guys. Like Ozzie [Alonso]—he's a great competitor and a great friend. I want to be a sponge and take in all the information and advice he gives me."

FC Dallas should be fun to watch this year. Oscar Pareja's side has a chance to be one of the league’s best squads and the roster is built around young players, many of whom were developed by the club. Last year FC Dallas finished with the best record in the Western Conference and if the team's 20-somethings continue on their current trajectory a deep run in the playoffs seems likely.

Last season Kellyn Acosta played nearly 2,000 minutes and would have earned a lot more time had he not missed more than a month due to the U-20 World Cup. The question will be where he plays with the acquisition of designated player Carlos Gruezo. Does Acosta stay in the box-to-box midfield role, where he is at his best, or does he float back to fullback?

Acosta, 20, is also a promising player with the United States and earned two caps with the full national team in January. He played out of position at left back but still caught Klinsmann’s eye. His position might not be settled but the experience he is getting for his age should pay dividends.

The Sporting Kansas City left back made 24 appearances (14 starts) in 2015 and proved to be a dependable player for Peter Vermes. This year, expectations are once again high in Kansas City and Dia, 22, looks like he could be a regular starter.

A native of France, Dia is an American citizen and earned a few call-ups to the U.S. U-23 team early in the cycle. He fell out of favor around qualifying but should the team qualify for the Olympics, he might sneak back into the fold.

There have always been a shortage of left backs in the United States but Dia is quietly establishing a nice career with a solid team. If he has a strong 2016, he could raise his stock quickly playing a position which has been the Achilles heel of U.S. Soccer.

Still just 20 years old, FC Dallas holding midfielder Carlos Gruezo is a designated player with Bundesliga experience go with and 10 caps with the Ecuadorian national team. His signing was an important moment for MLS, as it showed that the league could land a player with this much potential.

Gruezo will be expected to play a starring role in Dallas as it pushes to be the best team in the league. If he plays to his potential, Dallas could take its game to another level.

There is a good reason why Josh Yaro and Keegan Rosenberry are being grouped together. They both came from Georgetown University, both are defenders, both were drafted by the same team with consecutive first round picks in the 2016 draft, and both are expected to help bolster the Philadelphia Union’s backline.

“Him playing right back and me playing right center back, we have a relationship set up and we rely on each other on the field,” Yaro said. “I know where he’s going to be and what he is going to do in situations and knowing that, it helps me to make my next move—and I think I can say the same for him. Knowing my position helps him play accordingly and that relationship is something that’s unique and an advantage a lot of other right backs and center backs don’t always have.”

Many pundits expected Yaro to be selected near the top of the draft. Rosenberry was a bit of a surprise with the third pick but his preseason performances suggest he has plenty to offer.

“I’m really happy,” Union coach Jim Curtin said. “He’s playing in tough preseason games, and I think he’s shown that he more than belongs. He’s not just a guy who’s happy to be here, he’s really contributing a lot. He’s a very intelligent player. I think his athleticism is maybe underestimated by people. He jumps really well, and he’s smart. He has a very high soccer IQ, so he makes the right decision a lot. I’m very happy with him right now.”

The goalkeeper position is often occupied by older players. At 20-years-old, Jesse Gonzalez is very young to be a starting goalkeeper for FC Dallas, perhaps the strongest team in the league. The American-born but Mexican U-23 international had a standout moment in the 2015 playoffs when he shined in the penalty shootout win over Seattle.

Is Gonzalez ready to be the team’s No. 1 from the start of the season? He has the talent but the entire season will require a test of consistency and mental strength.

In week one against the New York Red Bulls, Toronto FC's Marky Delgado showcased that he could be on the verge of taking the next step in his career. After coming on as a second half substitute, the Glendora, Calif., native made a great defensive play to force a turnover on Dax McCarty. Delgado then made a nice run, received a ball from Sebastian Giovinco, and scored the final goal of a convincing 2-0 win.

In 2015 Delgado played well, making 21 appearances for the club and scoring three goals in league play. In June he started as the defensive midfielder for the U.S. U-20 World Cup team, and while he struggled in that role he has thrived in the attack for Toronto.

Toronto FC already looks vastly improved with some key defensive additions. If Delgado can raise his game in the midfield and learn alongside players like Michael Bradley, Toronto could very well contend for the top spot in the Eastern Conference.