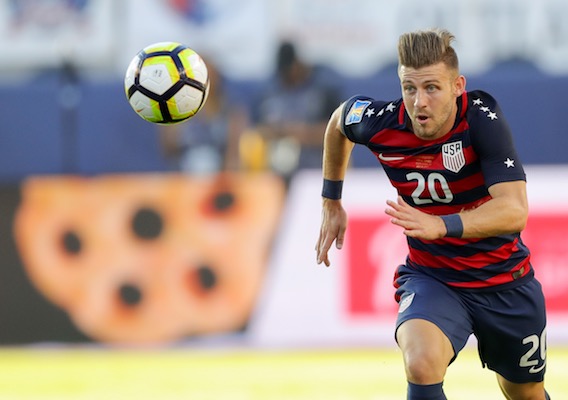 Breaking down the USMNT roster: what to make of it and which players to watch

The United States national team roster has been unveiled and ASN's Brian Sciaretta is here to break it down for you with his thoughts on Gregg Berhalter's first roster.
BY Brian Sciaretta Posted
December 21, 2018
5:30 AM

THE JANUARY CAMP roster for the United States national team has finally been unveiled and there are not many surprises as most of the top domestic-based players in their mid-twenties made the team. As always, it is a tough platform to standout given that it takes place in the offseason but historically several players have used the camp to spring board their careers.

The absence of Darlington Nagbe and Brad Guzan is not surprising given that they recently participated in MLS Cup and will have important CONCACAF Champions League games coming up.

The most surprising omission is Tim Parker who Berhalter said he elected to simply go with young players – even if 25 is not old for his position. But in central defense, Berhalter elected to call-up three players in Austin Trusty, Mark McKenzie, and Justen Glad who are all eligible for the upcoming U.S. U-23 team.

The realization is that there is a lot of hope and expectations on players (both abroad and domestic) who are either only just beginning their careers or haven’t even yet played at the professional level. That’s risky and probably unhealthy. There needs to be established and experienced professionals throughout the player pool that reduces the expectations on the young contingent.

With players like Russell Canouse, Sebastian Lletget, Keegan Rosenberry, Nick Lima there is a look at players who, if they take advantage of the opportunity, could bridge the gap to so that the very young and inexperienced players are not brought into the team faster than they should.

The lack of depth is apparent

On the flip side, this roster also shows just how thin the United States national team pool is at certain positions. Paul Arriola is the only true winger on the roster. The forward positions and creative midfield selections are also underwhelming in depth.

This doesn’t reflect poorly on Berhalter because there really isn’t anyone that he left out that was deserving of a call-up. It’s just a tough take on the player pool at the moment that the last generation of players did not produce enough in these positions. There are signs that the next generation will be more productive in these areas but until then, it is far from certain.

Russell Canouse: One of the players who has the most to gain from this camp is Russell Canouse. The national team pool is deep in central midfield but not many are pure No. 6 defensive midfielders. Weston McKennie, Tyler Adams, and Kellyn Acosta all play as No. 8’s who can cover at No. 6. It has been awhile since the U.S. team had a dependable pure No. 6. Kyle Beckerman held the job for a little bit but he was brought into the team at an older age. Canouse has an opportunity in this camp to address a position of need.

Reggie Cannon: It seems pretty certain that DeAndre Yedlin will be the starting right back for the foreseeable future but Cannon has a chance to secure his grip as the backup right back. Cannon earned his first call-up in October but still has competition from Shaq Moore, and now Keegan Rosenberry and Nick Lima. This could mark the start of a pretty big year for Cannon who will also likely be the starting right back for the U.S. U-23 team for Olympic qualifying. He will probably eventually face competition from Sergino Dest at Ajax, but for now Cannon has a big opportunity to make inroads with Berhalter.

Sebastian Lletget: The LA Galaxy attacking midfielder started his national team career off in strong fashion in 2017 but suffered a serious leg injury which forced him out for most of the remaining year. This past season was a tough time for everyone on the Galaxy but Lletget will have an opportunity in this camp to address a key need in the attacking midfield. It is a thin area for the U.S. team and Lletget has always been a crafty and technical player, when healthy and fit. If he has a positive camp, it would be a big help for Berhalter.

Djordje Mihailovic: Mihailovic, 20, is in a very similar position to Lletget but only is trying to make a case to be the creative force more for the U-23 Olympic qualifying team. He’s very technical and promising but is coming off a long recovery from ACL surgery. He looked both rusty and promising when he returned at the end of the 2018 season. If he is fit and ready, a good camp could give the U-23 team a good starting point ahead of preparations for qualifying.

Paul Arriola: Arriola plays a wing position which is thin for the U.S. team right now. Throughout his career he’s been solid in some areas including his willingness to hustle for 90+ minutes and his ability to play nice defense from the wing position. But in his career, the one thing that had been missing has been his final ball – both in shooting and passing. But in the second half of the DC United season, Arriola showed a lot of promise with his final ball and it was important in DC United’s run to the playoffs. The question will be for him to show that this improvement is permanent and that he can help create for a U.S. team that needs more attacking options.