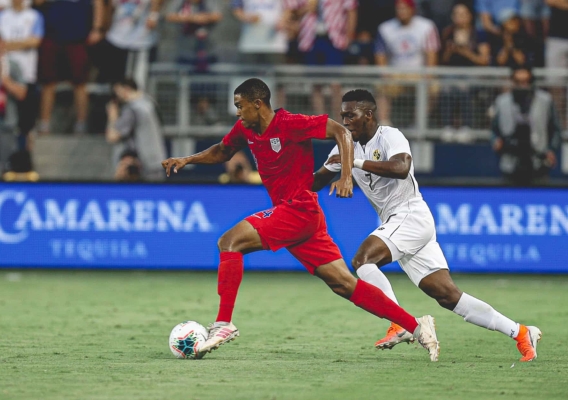 Breaking down the U.S. team's 1-0 Gold Cup win over Panama

The United States national team defeated Panama 1-0 to win Group D of the Gold Cup and set up a date with Curacao in the quarterfinals. ASN's Brian Sciaretta watched the game and is here with his thoughts.
BY Brian Sciaretta Posted
June 26, 2019
7:35 PM
THE UNITED STATES national team clinched first place of Group D at the 2019 Gold Cup with a 1-0 win over Panama in Kansas City. The win was rather pedestrian and far from the beautiful game, but the U.S. team finished the group stages with nine points, 11 goals scored, and zero goals conceded.

Manager Gregg Berhalter elected to make 11 substitutions from the lineup that started the first two games and it took awhile for the team to gain any sense of rhythm.

Offensively, the team looked disjointed and lacking ideas but a big portion of that was poor finishing in the first half. Jozy Altidore had a pair of quality chances in the first half that he was unable to finish and Jonathan Lewis also could have done better from close range that he waited too long to get off the shot.

The result is that Panama was getting more comfortable defending and hoping to catch a U.S. team with a slower backline on a counterattack. That nearly happened twice with Omar Gonzalez nearly seeing his lack of footspeed gift Panama golden chances. Fortunately for the U.S. team, that never came to fruition and the U.S. team was generally very good defensively.

Despite the lethargic game, the U.S. still held a healthy edge with possession and touches in the final third. It wasn’t until the 66th minute when the U.S. team finally found the breakthrough. The play began with a Djordje Mihailovic corner was driven effectively into the box. It found the head of Matt Miazga who headed it back towards the goal. Panama was not able to effectively clear Miazga’s ball which instead found its way to Jozy Altidore who was able to hit an overhead kick into the net from close range. For Altidore it was his 42nd goal of his international career.

After Christian Pulisic came into the game just prior to the goal, Gregg Berhalter continued to make offensive-oriented substitutes with Tyler Boyd and Gyasi Zardes also coming into the game. Panama never really threatened the rest of the way and eventually the whistle sounded.

The U.S. team will now head to Philadelphia where it will face Curacao on Sunday in the quarterfinal (7:30pm ET, FS1). If the U.S. team is successful, it will face the winner of Panama and Jamaica in the semifinal on July 3 in Nashville.


The U.S. team’s midfield did not work well together. Wil Trapp wasn’t able to use his passing range to break down the game and his off the ball movement wasn’t great. Christian Roldan struggled make effective plays. Panama felt comfortable sitting back after a while.

Djordje Mihailovic was the best of the bunch in the midfield and he rebounded from a poor showing in the pre-Gold Cup friendlies. Mihailovic is still young at 20 and is far from being an impact player on this team but it is certainly possible for him develop into a nice player over time.

Of the player on the roster, Bradley, McKennie and Pulisic are clearly the first choice but if McKennie were to get suspended (as he is carrying a yellow card), Mihailovic would be the better replacement option at this point.

The lack of depth right now on this roster is alarming and moving forward it will be interesting to see which players Berhalter works into the team. Fortunately for him there are options in Jackson Yueill, Duane Holmes, and Paxton Pomykal all looking to take a role with Sebastian Lletget now also healthy after his recent injury.

Gonzalez’s footspeed is a major liability


Panama did not have much by way of attack but whatever chances it did have seemed to come from getting into a foot race with Omar Gonzalez and exploiting his lack of speed. It was one of the main reasons why Panama sat back as far as it did – it gave them their best chance on offense in terms of more space to get after Gonzalez.

Fortunately for the U.S. team, Matt Miazga had a sharp game and the Walker Zimmerman/Aaron Long tandem was useful earlier in the tournament. Gonzalez clearly looks like the fourth back on this roster and should fall further back when John Brooks is healthy. It’s not clear how Gonzalez though is ahead of other options like Cameron Carter-Vickers, Auston Trusty, Miles Robinson, or Erik Palmer-Brown who are all having very good seasons.

What were the positives?


Overall, Matt Miazga was easily a positive for the U.S. team. Panama wasn’t creating many chances but Maizga was competent in handling everything that came his way. He was also helpful in covering for Gonzalez on several chances.

A lot of the better performances from the U.S. team on the day came from players who were useful in some areas but lacking in others. Still, however, it ended up being a net positive.

Reggie Cannon, 21, is a good example. The young right back was defensively sound and was both athletic and strong to handle Panama’s attackers. Getting forward, he was smart enough to make nice runs and avoid bad turnovers. But the FC Dallas product lacked a final cross that could have opened up the game.


Looking for more opportunities like this in the 2nd half??????pic.twitter.com/09yInVRT3X

Winger Jonathan Lewis was also very energetic with his speed and dribbling to get touches behind the defense and in the final third. Like Cannon, his final ball was lacking in several areas although sometimes his teammates were not making the best runs either.

Until his well-taken goal, Jozy Altidore was playing well in his movement in the box but his shot let him down twice in the first half from dangerous areas.

Looking ahead to Curacao


Curacao is the Cinderella story of the Gold Cup but when looking at their roster, they have players who have played for decent clubs. The team shouldn’t be taken lightly and it is playing confident soccer.

But regardless, the win over Panama on Wednesday wasn’t pretty but it got the job done and the U.S. team was in control, despite not generating nearly enough chances at it would. Now with many of its top players rested, it is in good shape heading into the knockouts.