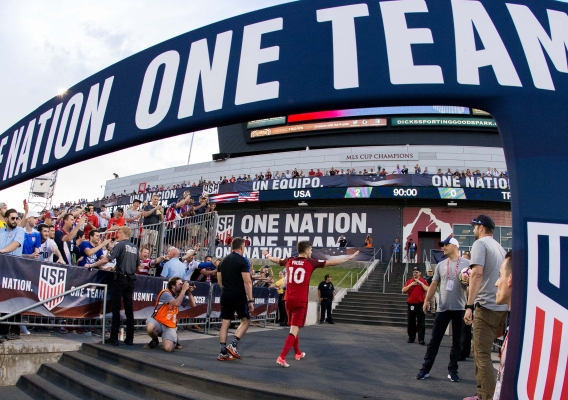 Breaking down the potential issues and solutions for the international calendar

The ongong COVID-19 shutdown is affecting soccer across the globe and when everythign resumes is still unclear. Once it does, the prioirty will be getting clubs and leagues going. But how will that affect national teams, specifically the U.S. team and youth national teams, moving forward? Brian Sciaretta gives his thoughts.
BY Brian Sciaretta Posted
April 09, 2020
6:05 AM

WHEN IT COMES to soccer, the 2020 calendar is impossible to predict at the moment and there are so many issues up in the air. Right now, various leagues are hoping to resume in May, possibly behind closed doors, but even that is very uncertain. Then when it comes to the international calendar, even more questions remain as tournaments are shifting and most national teams have not played together in many months.

The latest casualty was the CONCACAF Nations League semifinals and finals which were scheduled to take place in June.

“Given the circumstances, the decision makes complete sense,” U.S. national team manager Gregg Berhalter said in a statement. “It's a shame that we're not going to be able to play and compete for a trophy in the June window, but the most important thing right now is that people are staying home and staying safe. Sport is part of our everyday life, sport gives us a sense of community, but in this time we all need to be following instructions and help as much as we can to stop the spread of this virus.”

The amount international tournaments that are now under new schedule or are likely to be rescheduled is growing.

Very little is set right now but here are some issues likely under consideration at the moment and how they will affect the U.S. national team or youth national teams.

A priority on club soccer now

In his statement on the postponement of the Nations League, Berhalter addressed the need for a priority on club soccer at the moment.

“When the timing is right, the priority is to get the leagues back up and running and national teams will come next,” Berhalter said. “We have a close-knit group that continues to grow, and we are using this time to maintain our connections. When we do get back together, we'll regroup and be as focused as ever."

Berhalter is absolutely correct that the focus needs to be on leagues and clubs once play resumes. Clubs are being profoundly hit by the global shutdowns and clubs are were players spend and overwhelming majority of their time. This is the lifeblood of the sport and the smaller clubs in smaller leagues throughout the world could soon be at a point of financial peril.

Should the leagues resume in June, July, or August (either with crowds or behind closed doors, it will be interesting to see if there is pressure to alter the international windows in September, October, and November. If clubs are just trying to get back on their feet, is it fair or prudent to then have international windows for nearly two weeks in each of the three subsequent months?

Will FIFA consider eliminating one or more of the windows? Will it abbreviate a window similar to how the now defunct August international window used to be (essentially five days and one game)?

Or will it simply leave it as is? That is possible but its easy to see clubs and leagues push for a change once timelines for return can accurately be determined.

The postponement of the CONCACAF Nations League presents a lot of challenges for the region and its teams. There are four teams remaining in the tournament and each of the teams will get two games.

If the region’s World Cup qualifiers resume as scheduled in September, it is hard to see how this tournament ever takes place. Qualifiers will take the bulk of international windows for the foreseeable future and next summer is the Gold Cup. World Cup qualifying wraps up in the September 2021 window, it is fair to question what the appetite will be for the tournament in the 2021 October or November windows of 2021 or at any point in 2022 since it will have been over two years since the group stages.

If the region’s World Cup qualifiers are delayed, perhaps this tournament might make sense before qualifying begins. It also might serve as a useful tune-up for World Cup qualifying. But it would likely require a full international window where two games are played (semifinals and third place/final).

But the question remains: will the international windows later in this year still go on as schedule or whether or not they are altered? And if altering the window means that tournament is cancelled, would it be missed?

The biggest priority for the U.S. team and the CONCACAF region right now is World Cup qualifying.

The bad news, of course, is that if qualifying were to resume as scheduled in September, the full U.S. national team will not have played together since November 2019. While it’s true that all of the national teams are in the same boat these days, is it in the best interest of quality and fairness to have such an important tournament with teams that haven’t played together for 10 months and players who have all missed a sizeable portion of 2020?

But the good news is that there is actually room for flexibility at the moment to delay playing important international games in 2020.

This a concern across the globe. The remaining Euro qualifiers can be pushed into 2021. For World Cup qualifiers in other regions, there is also the option of pushing their final rounds further into 2022 since the World Cup doesn’t start until November.  That would require the draw to be moved from April 2022 and taking place after the June window. Doing so would open up the possibility of four games. (Here is a look at the current international calendar at the moment).

For the U.S. team and CONCACAF as a whole, this is the earliest start and earliest finish in the cycle for the Hexagonal round of qualifying – and this is all for a World Cup tournament that takes place the latest it has been in modern history.

The Hexagonal is slated to wrap up in September 2021 (and the playoff round in October). There are two full international windows remaining in the year, then one in March 2022, and then the possibility of four games in May/June 2022.

If forced to be creative, there is a lot of time on the back side to push qualifiers.

The 2021 Gold Cup is pretty far away right now and the best guess is that clubs and national teams will hope to get back to normal sooner than later.

Rescheduling the 2021 Gold Cup will probably only happen if pushing CONCACAF World Cup qualifiers far into 2022 becomes unworkable. But many regions are under the same schedule right now with the Copa America and European Championships also now taking place in the summer of 2021.

CONCACAF could still play the entire Hexagonal in 2021 with teams playing two games in March, June, September, October, November, and the playoff in March.

The approach for Olympics and Olympic qualifying is going to be changed a lot given the new timing of all of the other events. As of now, it has yet to be determined if a new age range or the use of over age players will be altered.

And there are also other U-23 players who might become ready for the full national team over the next year. Players like Jesus Ferreira, Ulysses Llanez, Erik Palmer-Brown, Brendan Aaronson, or Paxton Pomykal. The pool that Jason Kreis was counting on could now be different. If it does hold together, however, it should benefit the U.S. more than other teams since Kreis had a younger core group who will now only have more professional experience.

If the U.S. U-23 team qualifies for the Olympics, obviously it opens the door for some of the best U-23 players to take part, but everything is dependent on club releases. Players like Christian Pulisic, Tyler Adams, Weston McKennie, Josh Sargent, Tim Weah, Gio Reyna, Antonee Robinson, and Sergino Dest are all age eligible. It’s unlikely all of these players (or even most) would be released for the Olympics but it’s likely at least a few would be. But it is probably impossible any of these players plays in both the Olympics and the Gold Cup. U.S. Soccer and Gregg Berhalter might have to make a decision where to put some of these players.

U.S. U-20 World Cup qualifying was slated to take place in Honduras in June and July and that will almost surely not happen. This was the earliest CONCACAF has ever held U-20 World Cup qualifying in the cycle. The benefit to having an early qualifying tournament is that the chances would be much higher clubs would release the best U-20 players since it is in the offseason for most leagues and MLS would be in midseason, and not in a playoff push as it was during the tournament in November 2018.

But this is no longer the case. U-20 World Cup qualifying will likely now have to return to its previous time frame of somewhere in between November 2020 and February 2021. Perhaps CONCACAF will allow teams to augment their roster during the later stages of qualifying should it fall within an international window but releases will now be harder to come by. If it takes place in later 2020, MLS teams might be reluctant as they were in 2018 since it is the playoffs.

If qualifying is in 2021, it will be much harder since it likely won’t be during an international window (making European releases hard) and it will fall during the MLS offseason when players aren’t at their best. Compared with recent U-20 teams, the bulk of this team’s core is based in Europe and even South America (Harper, Kelman, de la Fuente, Flach, Hoffmann, Cardoso, Miljevic, Booth, Sepulveda, Vassilev, Sousa, and Otasowie) compared with MLS (Bassett, Roberts, Pepi, Araujo, Ochoa).

But now, U.S. U-20 head coach Anthony Hudson is going to have to press forward and prepare for a qualifying tournament that will likely take place at a time when club releases are far less certain than they were last summer.