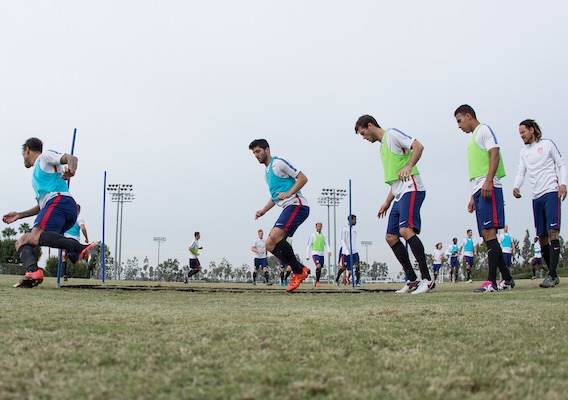 Brandon Vincent: "I Had No Idea It Was Coming at All"

The 22-year-old left back has enjoyed a remarkable month, progressing from wearing the armband in an NCAA final to getting a U.S. national team call-up to being selected with the fourth pick in the MLS draft.
BY Brian Sciaretta Posted
January 20, 2016
7:30 PM

A LITTLE MORE than a month ago, Brandon Vincent was Stanford University’s captain and starting left back.

In the weeks since, Vincent helped lead the Cardinal to the NCAA title, the first in program history; was selected by the Chicago Fire with the fourth overall pick in the MLS SuperDraft; and received a call-up from Jurgen Klinsmann for the United States national team’s annual January camp in Carson, Calif., despite not yet having played a professional game.

“I had no idea it was coming at all,” Vincent said.

Klinsmann’s overall focus for this camp is on talent identification on two different fronts: not only for the senior team but for the U-23s, which will face Colombia in March in a playoff for this summer’s Olympic Games. With that in mind, 10 of the 26 players called in—including Vincent, 22—are age-eligible for Rio.

Vincent is not limiting his outlook to the U-23 side alone, however, believing that inserting himself into the full-team mix is at least possible. But even a youth-team spot, it must be said, would be noteworthy: Besides his lack of professional experience, Vincent also entered camp with a near-total lack of international experience.

Prior to this camp, after all, his only time spent in the U.S. setup had come last August as part of a U-23 college-identification camp. No official matches were played.

“Going in, I didn’t know what to expect, really,” Vincent told American Soccer Now from Carson. “I was going up against the best players of our country, so going in with that mindset, I was just going to try to go in and do my best to hold my own. It’s a great experience to be around these guys, but I am trying to make an impression as well.

Whether or not he breaks through now with the senior side, Vincent can at least partly thank his former Stanford teammate Jordan Morris for opening that door. Morris, who just announced his decision to sign with the Seattle Sounders, joined the U-23s in August 2014, at just 19, and then jumped to the senior team later that same month. That sequence of events made Morris the first college player called in since 1999.

There is no sign of bitterness with Vincent over having been bypassed in the past by the U.S. youth teams. In fact, asked about Morris’s achievements, Vincent gushes. “He was an inspiration to everyone on the team, me personally, and I’m sure the entire college game as a whole,” he says.

It’s that kind of commitment, perhaps, that led Stanford coach Jeremy Gunn to name Vincent a co-captain for the 2015 season alongside Ty Thompson, brother of San Jose Earthquakes and U.S. U-20 midfielder Tommy Thompson. Vincent went on to deliver a stellar performance in the NCAA tournament as the Cardinal topped Clemson in December to win the national championship.

"Brandon is clearly an uncommon individual," said Chicago Fire sporting director Nelson Rodriguez. "He's very intelligent, very thoughtful and he loves soccer. This is what he's prepared himself to do for many years. I believe there was a real strong mutual attraction right away, and I believe he's going to be a steadying influence in the locker room, even as a rookie."

After winning MLS Cup in their inaugural 1998 season and then three U.S. Open Cups in the early to mid-2000s, the Fire have spent the past few years in a slide. Last season was a particular low point, as Chicago (8-20-6) finished with the worst record in the league.

Quietly, however, with players like Vincent, Matt Polster, and Harry Shipp, the team has put together a talented young nucleus. What’s more, the Fire now are led by a man with meaningful experience with younger players. Veljko Paunovic, fresh off of guiding Serbia to the U-20 World Cup title, became Chicago’s ninth head coach in franchise history in November.

“I am excited for the opportunity to be part of that organization,” Vincent said. “I know they’ve been in a rut, but I know the new coach they brought in had success with the Serbian national team and with youth levels. Seeing that and being able to join up with him and getting going—that’s what I am excited for because he’s had success with youth.

Whatever comes out of this camp for Vincent, Klinsmann will likely give him every chance to succeed. Left back remains a position of dire U.S. need, after all, and natural ones like Vincent are uncommon finds.

“Whichever way you want to look at it, it's an incredible honor for him and an incredible opportunity for him to develop in his career,” Gunn, the Stanford coach, said of Vincent’s call-up. “I can honestly say that I would back Brandon in anything that he does because he's such an incredible, level-headed, motivated, and competitive person. So when you analyze each soccer player, any coach can see what a player has to offer. But when you work day-in and day-out with somebody, you get to see the rest of the iceberg below the waterline, and Brandon is a complete individual.

“So if his soccer playing abilities are anywhere near good enough, then he will make sure he's successful,” Gunn added. “There are loads of people out there who don't always fulfill their potential. But he's a very, very grounded individual that will make the most of his opportunities.”