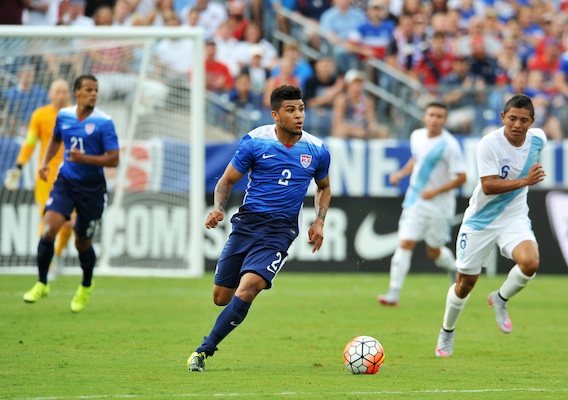 The Yanks pulled away from Guatemala in the second half en route to a 4-0 win that could have been a lot closer if Guatemala managed to finish its chances. Here are our Player Ratings.
BY Brian Sciaretta Posted
July 03, 2015
11:05 PM

THE UNITED STATES men's national team defeated Guatemala Friday night in a Gold Cup tune-up in front of a large crowd in Nashville. Despite the 4-0 scoreline, it was anything but a flawless display by the Americans.

Gyasi Zardes and DeAndre Yedlin both looked dangerous and hungry to impress. Michael Bradley eventually controlled the midfield and Timothy Chander looked like a threat in attacking from the right back position.

That said, Guatemala’s Jose Contreras missed two golden chances that just about every decent striker would finish with ease. Against Honduras, Panama, and Mexico, those opportunities are converted and the game takes on an entirely different feel. Also, Jozy Altidore looked frustrated and Mix Diskerud was not always on the same page as Bradley, his central midfield partner.

Here are my U.S. player ratings for the match. Be sure to create your own right here.

Brad Guzan: As the potential return of Tim Howard looms in a matter of weeks, Guzan was effective and came up with nice saves in the 33rd and 39th minutes en route to a shutout. He appeared to have trouble communicating with his backline in the second half and his distribution was shaky. Still, none of his errors were costly. Rating: 5.5

Fabian Johnson: The versatile Johnson earned the start at left back and put in a sturdy and mistake-free half before being replaced by Greg Garza. He was eager to get forward made a series of dangerous runs early in the game. Rating: 6.5

John Brooks: The Hertha Berlin defender was smooth with the ball and distributed very well. He made fewer mistakes than many of the other defenders and he looks to be coming into his own on the team’s backline. Rating: 6.5

Omar Gonzalez: The Los Angeles Galaxy central defender helped contain Guatemala’s attack in the air. He made a few positional mistakes later in the first half but overall looks like a beast against CONCACAF teams. Rating: 6

Timothy Chandler: The Eintracht Frankfrut right back made some mistakes early and his most glaring gaffe was allowing a close-range header in the 39th minute. After that he began to pick it up and was a major contributor to the offense. He started a nice counter attack in the 42nd minute and nearly set up a goal for Dempsey 13 minutes later. His goal in the 58th was a stunner. Rating: 7

Mix Diskerud: It wasn’t the best night for Diskerud who struggled to connect with Bradley. Far too often Bradley drifted far back into the midfield and Diskerud did not move forward to fill the void. He had one giveaway in the 34th minute that sprung a dangerous Guatemala counterattack. Rating: 4.5

Graham Zusi: Making his first appearance with the national team in 2015, Zusi struggled to get dangerous or even swing in dangerous crosses which is his normally his strength. With the effective play of Yedlin and Zardes, Zusi might not see many minutes at the Gold Cup. Rating: 4

Michael Bradley: The new national team captain took a little bit of time to find his way into the game as he was dropping too deep to get the ball. Eventually he began to gain control of the midfield. On the opening own-goal, he hit a beautiful pass in the 18th minute which sent Yedlin into a dangerous area to deliver his cross. He also drew a penalty in the 71st minute off a nice run into the box. As usual, he rarely misfired with his passing. Rating: 7.5

DeAndre Yedlin: The speedy Tottenham winger-fullback got the start on the wing and Guatemalan defense could not find a way to defend him. The Washington native frequently worked his way into dangerous positions and was always involved in the attack. His cross in the 18th minute created the own-goal that gave the U.S. the leade and then in the second half he assisted on Chandler’s goal. He is still raw but can be very dangerous. Rating: 7

Clint Dempsey: The Seattle Sounders forward is coming off a suspension with his club but showed little signs of rust. He was aggressive in open spaces and drew a very dangerous free kick in the 43rd. His clever penalty in the 72nd minute put the game out of reach. Rating 6

Jozy Altidore: It was not the best night for Altidore, who had a penalty saved and looked frustrated multiple times before coming out of the game in the 68th minute. He also should have done more with a golden chance in the 57th minute after a run from Zardes gave him clear shot inside the box. (Guatemala keeper Paulo Motta had Altidore's number Friday night.) He is coming off a recent hamstring injury and perhaps is still not completely back physically. Rating: 4

Ventura Alvarado: The Club America central defender replaced Omar Gonzalez at halftime and made a mistake in his first few minutes when he was caught ball-watching on a free kick that resulted in a very close miss from Jose Contreras. He made a few mistakes in his 45 minutes but also had nice moments that helped to preserve the shutout. Rating: 5.5

Greg Garza: The Club Tijuana left back replaced Fabian Johnson at halftime and had a sharp outing with his passing out of the back. He frequently was able to connect with midfielders in dangerous positions. Rating: 6

Gyasi Zardes: The Los Angeles Galaxy attacker came on as a winger and was instrumental in helping the U.S. team put the game out of reach. He was consistently dangerous. He had a great run from the wing in the 57th minute which created a golden chance for Altidore. His assist on Wondolowski’s goal in the 86th minute was perhaps the best individual play of the game. Rating: 7.5

Tim Ream: After replacing Brooks at the one-hour mark, Ream had a decent shift, linking the defense with the midfield with quality distribution. Defensively he was solid although he failed to mark Jose Contreras tightly on a Carlos Ruiz cross and was fortunate the Guatemalan missed. Rating: 5.5

Alfredo Morales: The Ingolstadt midfielder replaced Mix Diskerud in the 62nd minute and had a solid outing, empowering Bradley to play further up in the attack. He looked comfortable playing the defensive midfield role and looks like a solid alternative to Kyle Beckerman who will normally start in that position in big games. Rating: 6

Chris Wondolowski: The San Jose forward came on in the 68th minute for Altidore and made two very nice plays. The first was a quick feed to Chandler in the 70th minute to put the right back in a dangerous position on a run up the right side. Then, in the 86th minute, he finished off a pass for Zardes for his 10th international goal. It was a tap-in, but Wondolowski made a smart run to get into a dangerous position. Rating: 6