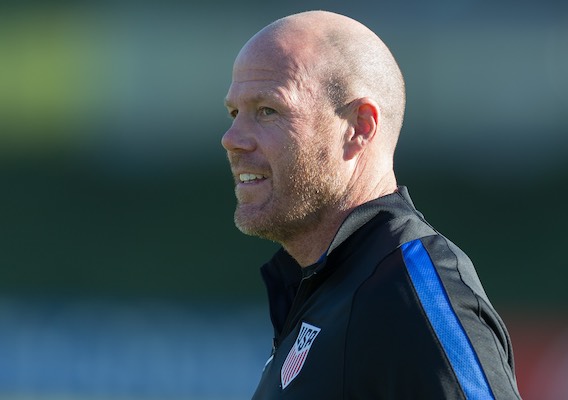 The former Premier League star was named head coach of Major League Soccer's New England Revolution, and he spoke to ASN's Brian Sciaretta about his decision to join the Krafts in Massachusetts.
BY Brian Sciaretta Posted
November 17, 2017
4:00 PM

LAST WEEK former United States men's national team goalkeeper Brad Friedel became the new manager for the New England Revolution after previously guiding the United States U-19 team. Now in 2018, the Ohio native will look to get the team back on track after missing the playoffs the last two seasons.

As a player, Friedel was groundbreaking at just about every level. He won the Hermann Trophy in 1993 as the nation’s top college player with UCLA. After failing to obtain a UK work permit he played his first professional minutes in Turkey with Galatasaray in 1995 (and won the Turkish Cup in the process) before returning to the United States to play with the Columbus Crew in MLS' inaugural season.

Following an impressive stint with the Crew, Friedel earned a transfer to Liverpool but found himself buried behind David James and later Sander Westerveld.

But in 2000 his career began to take off at both the club and international level. For eight seasons he played with Blackburn Rovers followed by three at Aston Villa before ending his career with Tottenham. During that time he set a Premier League record for most consecutive starts: 310. He won the League Cup with Blackburn in 2002.

Internationally, Friedel was a standout with the U.S. national team where he earned 82 caps. His most memorable moments came at the 2002 World Cup where he helped the U.S. team to a quarterfinal run.

During his final years at Tottenham, Friedel acquired his UEFA “Pro” License before returning to the United States to coach the U-19 team while also serving as an assistant to the U-20 national team that won the CONCACAF Championship in 2017.

American Soccer Now caught up with him to get his thoughts on his new job and the next steps for U.S. Soccer.

Brian Sciaretta for ASN: Why did you accept this job offer? Why is the Revolution a good fit for you?

Brad Friedel: As you could imagine this wasn't the first time I was called about a senior-level gig. Mike gave me a call and I've known Mike Burns for a while and he a tremendous amount of integrity and a tremendous amount of honesty. I was intrigued to come and speak with him and team president Brian Bilello. They took me around the club and they showed me what was in store for the future of the New England Revolution.

Then, after I had an interview and meetings with Robert and Jonathan Kraft, it was quickly proven to me that this was an ambitious club and they want to move forward. I contacted my staff right away and we collectively decided that this was both something we wanted to pursue. There were obviously a lot of other very strong candidates considered so I tried to put my best foot forward for the Kraft organization and Brian and Mike.

ASN: Many of the new clubs in MLS are ambitious these days and you can see the steps Atlanta took this year and the plans that LAFC has for 2018. What makes the New England Revolution ambitious?

Friedel: Their vision on the training grounds. You can speak to Brian or Mike for depth about that. It was one area of intrigue. On the stadium, you'll have to speak with them but I was very pleased to hear where things were at with it. As far as the budgets, there are a lot of targets out there. I think that was another thing that attracted the Kraft organization to the likes of myself and my staff. The amount of people we know and the amount of players we know around the world. Getting deals over the finish line is not easy, as you probably know. But we have a lot of irons in the fire and we'll get to work straightaway. I am very confident that we will get some very good players on the field.

ASN: With the team failing to qualify for the playoffs the past two years, how far away do you think the Revolution are from contending?

Friedel: You speak to most people, everyone will admit there are a lot of very good pieces to this squad. We can tweak what is here and also what is out there. Those are the more correct words. Some of the changes might be in mentality, some might be in personnel. But for the staff to get going, we like the core of the group very much. Any player we bring into the club or the position and the placement in the roster where they'll come in will be better than what we currently have on the roster. Otherwise, it doesn't make sense to bring them in. We think with a couple of additions we will be very, very competitive with the rest of the league.

ASN: You played in Europe for roughly 20 seasons under some legendary managers. It is also where you received your coaching education. Was there ever any thought to starting your coaching career in Europe?

Friedel: The country wasn't what was attracting me here. It was the opportunity. It is one thing I've learned quite early in my coaching education was to make sure you know what you're dealing with above you, sideways, and below you. When I had the talk with the Kraft organization, I was very happy with that. It doesn't matter to me how hard of negotiators they are or what the budget is, I do know they'll back my staff and I if we make prudent decisions on player personnel. And prudent doesn't mean we won't spend money. We will spend money if it is done with the right player. As far as Europe, if the correct opportunity would have arisen prior to this one, maybe that is what we would have done. But keep in mind, I was very happy doing what I was doing with U.S. Soccer and the U-19s and U-20s. We had a tremendous two-year cycle and Tab Ramos is an outstanding coach. I worked alongside Omid Namazi at the U-18s who is also a tremendous coach. So we had some good things going there. It was a difficult decision there all around.

ASN: We all know about the national team’s problems but after spending the past two years working with the top American teenagers, how optimistic are you for a brighter future for American soccer and the national team?

Friedel: I am very optimistic. I was optimistic beforehand. There were some tremendous players and you got to see that [this week] with Weston McKennie's goal and you got to see Tyler Adams in a midfield role along side of Weston. You got to see Kellyn Acosta in that midfield and Matt Miazga play in defense. Ethan Horvath had a very difficult first half and made that mistake but he is a very good goalkeeper. All goalkeepers go through those types of games and you just have to deal with it. DeAndre Yedlin is not an old player and Cameron Carter-Vickers is one of the best defenders in our country at his age. I could go on and on. The future is very bright and the work Tab Ramos is doing from the U-20s on down is impeccable. I've seen the work of youth sides all around the world and Tab's work is right up there among the very best.

ASN: You were the first-ever coach of the U.S. U-19 team. How important was the creation of the U-19 and U-16 teams, along with the increased prominence of the U-18 team? It seems like that has been able to expand the youth player pool aside when in the past the U-17 and U-20 teams had to do most of the work. Do you believe that has helped improve the results which we’ve seen at recent youth World Cups?

Friedel: That's one of the reasons and there is a whole host of 1998s that possibly wouldn't have gotten the opportunity with the 1997 group. Not because of Tab not wanting to bring them in but because he wouldn't have the time inside a two-year cycle. That was very important... There are a lot of good players out there and it's hard to name them all. But that was one of the missing pieces. There are a lot of pieces to go and the federation and Tab know about it. But it's not like you can flip a switch and have everything happen overnight.

I was fortunate enough when I was getting my coaching licenses to be at [The FA's national football center] St. George's Park and this was right during when they were doing a complete revamp of their youth system. I think people can see the dividends that it is paying off with the youth market. Their next step is to get their young players in Premier League first teams. We're doing very similar things here and it will pay dividends. You can't correlate what happened with the senior national team with what is going on at the youth levels just yet.

ASN: So many of the successful MLS teams recently have spent a lot of money bringing in key players like Giovinco, Lodeiro, Villaba, etc. Do you believe that the Revolution are going to be spending a lot of money in the years ahead or developing from within?

ASN: Finally, you were one of the iconic players from the Columbus Crew in its early years and it helped pave the way to England for you. You are also a very proud Ohio guy. Is it tough to watch the situation going on right now with that club? Do you have any thoughts about how that process is being played out?

Friedel: I'm going to answer this with a very simple answer and I am going to cut your question off at, "Is it hard to watch what's happening with the Crew?" I'll just answer it as Yes. I'm an Ohio guy. I'm not really going to go any further than that.