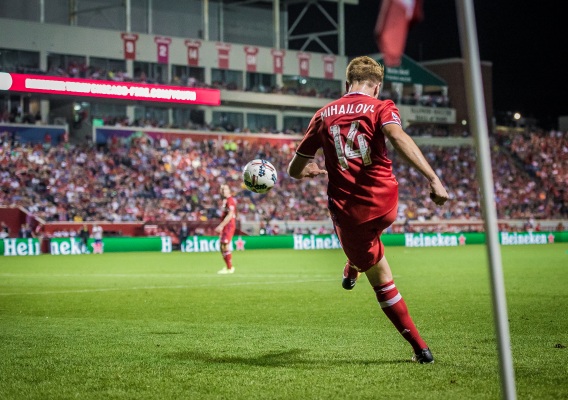 Boosted by USMNT call-up, Mihailovic eager to seize the moment

With the U.S. national team set to open soon in California, Djordje Mihailovic has a huge opportunity ahead of him to address a weakness at the No. 10 and perhaps emerge as a key player for the U-23 team as well.
BY Brian Sciaretta Posted
December 31, 2018
4:00 AM
THE UNITED STATES national team will open 2019 with a new coach, a new system, and many new players. After a year under an interim head coach which was designed just to give young players a taste of international play the year ahead will be an important one for U.S. Soccer at all levels which will have the Gold Cup, the U-20 World Cup, the U-17 World Cup, and Olympic qualifying.

For many of the players, both veterans and those new to the team, 2019 will mark a clean slate and it will begin with January camp.

Djordje Mihailovic, 20, is one of the players eager to get to Chula Vista for his first national team camp. The Chicago Fire homegrown playmaker played with U.S. youth national teams and broke into Chicago’s first team during the 2017 season in its run into the playoffs. That achievement, however, had a rough ending when Mihailovic tore his ACL in the opening playoff game and it forced him out of until he second half of the 2018 season.

But when Mihailovic returned to the Fire towards the end of the season, he played well – even as the Fire struggled. After getting back to full-fitness, Mihailovic now feels even stronger than he did before the injury. Following his call-up, the Florida-born, Chicago-raised attacker received many text messages throughout the Fire organization who were happy to have one of their own get named to the national team and represent the club at a high level.

Now he is ready to arrive at camp and perhaps address a position where the U.S. team lacks depth in the attacking midfield.

“The past few camps when they went to England and before here in the U.S., they said I was in the pool for the talks to get called in,” Mihailovic told ASN. “But because of my injury, I wasn't fully fit yet. But speaking with my agents after the last camp in November, they told me there was a really good chance I would be called in for January camp. That was always in the back of my mind. Then a few weeks ago, I got the e-mail that I was called up. I am very excited.

“We definitely have the quality to be a successful team,” he added. “I think with Tyler, Wil, Weston, Kellyn, there are a lot of 8's and 6's but at the 10 we are kind of low with numbers and that is where maybe I can come in and fill the gap.”

The opportunity to wear the U.S. jersey again is one that Mihailovic relishes. He was part of the U.S. U-17 residency under Richie Williams and then was part of U.S. U-19 camps under then coach Brad Friedel. His last experience came at a U-20 camp in 2017 although he was not part of the U-20 World Cup team that year.

But this camp will be more than simply a chance to get reacquainted with the U.S. program. There is a big chance for Mihailovic as he is also one of seven players who is eligible for the U.S U-23 team and that team is still yet to hire a coach and qualifying is only 10 months away. A strong camp could springboard Mihailovic into becoming a key part of that qualifying team.

“Of course, it certainly will be nice homecoming,” Mihailovic said. “Any national team opportunity, whether it's the U-23s or the full team, you never look beyond it. It's a great opportunity for the young guys to come in and for Gregg to shape his vision for what he wants the national team to look like. I definitely want to be included for his ideas for the Olympic qualifying team. Normally you would say that when a player moves up, you don't normally bring him down. But I don't think that is the case here. We're all hungry to be part of the national team and whether that is with the U-23's or the full team, there is no difference.”

“Gregg was one of the best coaches in MLS,” Mihailovic continued. “He is a great, great tactician. He has a great understanding of the game. You can see with the way the Crew play, they like to play with the ball. They don't sit back and counter, they use all 10 players with the ball, and even the goaltender too, to break down the other team. That suits my game perfectly and it is going to be a great experience to learn from him."


For Mihailovic, soccer runs very deep in his family and his call-up opens another chapter in that legacy. Mihailovic’s father, Aleks Mihailovic, was born in the former Yugoslavia and came to the United States as a child where he blossomed as a player and eventually turned professional for the Washington Diplomats of the now defunct North American Soccer League.

With a Yugoslavian-born (in present day Serbia) father and a mother who is from Macedonia, Mihailovic grew up in a multicultural household that was still decidedly pro-American.

Now Mihailovic will have the chance to be the first in his family to represent the United States, and that is one of the most meaningful aspects of his call-up.

“My dad was definitely a huge influence on my career and upbringing,” Mihailovic said. “He shaped who I am as a player and as a person. He taught me everything he know from playing and coaching. Without any of that, I wouldn't be where I am right now. It was always all USA in my house. Of course, you’re always proud of where your roots are. You never want to put that completely away. I am happy to be Serbian and Macedonian - where my mom is from. But we're an American family.”