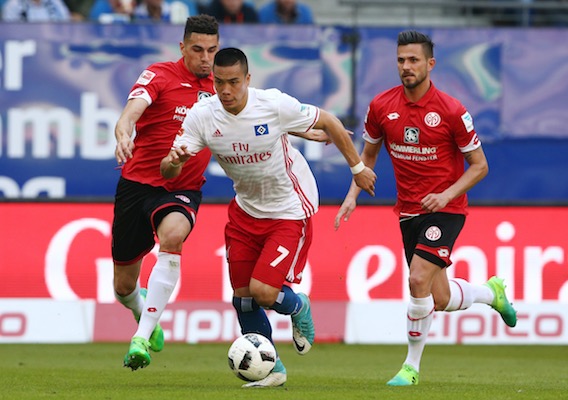 Some recent developments in Europe are providing a bit of hope, and a little bit of discouragement, for American soccer fans. ASN's Brian provides the latest developments right here.
BY Brian Sciaretta Posted
May 19, 2017
1:00 PM

Williams vs. Wagner for EPL spot

The English Championship playoff final is often referred to as the “Money Game” because no other game has as much on the line financially. The winner gets a spot in the Premier League and a healthy cut of its revenue stream. The loser remains in the far less valuable Championship.

Americans have performed well in this game before. Jay Demerit once scored the game-winner for Watford against Leeds United and was named the Man of the Match in one of the most memorable games in the club’s history.

The 2017 playoff final will feature two German-born Americans, one on each side, as Danny Williams and Reading will take on Huddersfield Town, which is coached by former United States national team forward David Wagner. The game will take place on Monday, May 29 at Wembley Stadium.

Williams, 28, left Hoffenheim for Reading in the hope that he would help the club return to the Premier League—a league in which he has always dreamed of playing. This season has been mixed for Williams. He started off the season strong but lost his starting place in March and April. He won it back just at the end of the season and has been very solid in the playoff series vs. Fulham.

A win for Williams would likely secure him a new contract with Reading in the Premier League and perhaps it would put him back in the picture for the United States national team. So far Bruce Arena has yet to comment on Williams and where he stands in the midfield mix.

Meanwhile, the job Wagner has done with Huddersfield has been incredible and he has, not surprisingly, achieved extraordinary popularity among the club’s supporters. Before the season, many pundits tabbed Huddersefield as one of the relegation contenders. Now one win from the Premier League Wagner, 44, is considered one of the top young managers in England.

No matter what happens in the game, however, Wagner will be coaching in a top-flight somewhere. It is conceivable that he could leave Huddersfield if the club loses to Reading on Monday. Bundesliga clubs such as Hoffenheim and even Borussia Dortmund are keeping tabs on him.

American fans are wondering if Wagner might be in consideration for the U.S. national team job someday. I have interviewed Wagner multiple times and he still follows the team and American soccer in general—he is even proud of a working knowledge of MLS. But his stock is just so high right now on the club level that it is hard to see him leaving for the international game anytime soon. Maybe after 2026 or 2030 World Cups

On Tuesday, Schalke’s U-19 team was eliminated from the playoffs by Bayern Munich—after blowing a 3-1 away win in the first leg. That disappointment has turned in to an opportunity for two of the club’s three teenage American prospects.

On Saturday Schalke will travel to Bavaria and take on already-relegated Ingolstadt in its Bundesliga finale. Little is at stake for Schalke, which is not in jeopardy of relegation and cannot qualify for a European competition. It was announced on Thursday that Americans Weston McKennie and Haji Wright would join the first team and both could potentially make their Bundesliga debuts.

McKennie, 18, was a top target for United States U-20 head coach Tab Ramos as he prepared his U-20 World Cup roster. In the end, however, Schalke would not budge. Meanwhile, Wright was never really in the plans for Ramos but that proved to be meaningless as he would not have been released either way. The third American at club is Nick Taitague who is a year younger than Wright and McKennie but is also eligible for the 2019 U-20 World Cup team.

Of the three right now, McKennie is the highest rated. While first-team debuts at the end of a season in meaningless games can be misleading and are sometimes done to put players in the window for either a sale or a loan, McKennie is one to watch. There is a good chance he is with Schalke’s first team next year on a regular basis.

Down to the wire with Wood, Hamburg

Until two months ago, Bobby Wood was having a great season and was by far the top American forward in the sport. He hired a new high-profile agent and it seemed like a blockbuster move was on the horizon.

The last month, however, has been a disaster for Wood—and not all of it is his fault. His play has been poor and Hamburg has secured just two points from its final five games. Anything other than a win against Wolfsburg on Saturday will send Hamburg and Wood into a relegation playoff, most likely against Eintracht Braunschweig.

As for Wood, it has emerged that the Hawaiian native has been playing with considerable pain in his knee. HSV coach Markus Gisdol did not reveal a diagnosis at a recent press conference but indicated Wood is far from 100%.

"He has played the second league last season, but is now established as a top player, who should always bring top performances," said HSV coach Markus Gisdol "His work is exemplary, he works hard for the team. Bobby fights through week after week—for weeks he's been playing with painkillers."

This is troubling on several levels.

First, Wood needs to be at his peak potential in order to earn a huge transfer. Given his history with knee problems that forced him off the field for most of 2011 through late 2013, a new knee injury will likely discourage potential suitors. Wood recently hired a new high-profile agent in an attempt to land a new contract with HSV or seek a big transfer. This past month is not helping, to say the least.

Second, if Wood is playing so poorly due to the injury, is it worth playing him? Yes the games are critical and it is admirable that he is trying to fight through pain to help his team, but for the sake of his sale value and his inability to contribute, is it worth it?  The team likely has three games left.

Finally, should this big a huge concern for the United States national team right now? Wood’s injury adds to yet another mess for American forwards. Jozy Altidore has missed several big tournaments, Clint Dempsey is at the tail-end of his career, and Jordan Morris is suffering through a sophomore slump.