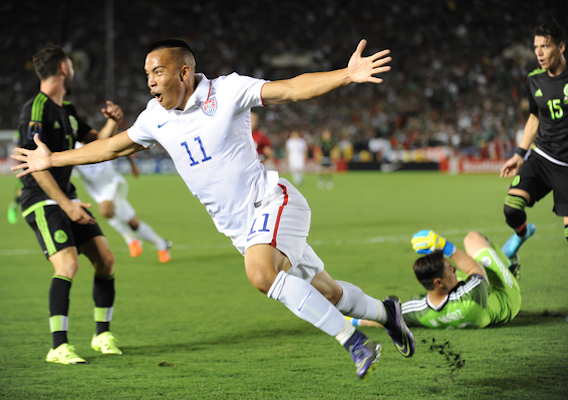 Bobby Belongs: Why Wood Needs to Be on the Field

The attacker didn't score against Costa Rica on Tuesday night, but his recent showings as a member of the United States national team demonstrate that he's a key piece going forward.
BY Noah Davis Posted
October 14, 2015
12:10 PM
HARRISON, N.J.—On April 2, 2011, Bobby Wood probably should have been on the bench, watching his teammates while protecting his throbbing knee. But he wanted to play, to help his United States U-20 squad qualify for the upcoming World Cup. Thomas Rongen's side, already missing Joe Gyau due to a knee injury, had limited options on the wing. Wood started in the second group stage game against Panama.

He helped stake the Americans to a 2-0 lead in the first 18 minutes, but it was clear to all those watching in Guatemala City's Estadio Nacional Mateo Flores that he wasn't right. Just after the half hour mark, Omar Salgado replaced Wood, who would miss the next match, a shocking loss to the home country that prevented the Stars and Stripes from reaching the World Cup.

After the tournament, the young attacker who only two months earlier had made his senior team debut for 1860 Munich struggled with knee troubles for more than a year. It's impossible to say how Wood's career would have progressed differently had he not taken the field that day in Guatemala, but it's fair to say that his desire to help his team put his career in jeopardy.

The good news is that this story has a positive ending, or at least an encouraging middle act. On Tuesday night, Wood—just six months removed from recovering from yet another knee injury—was one of the lone bright spots in the United States's 1-0 loss to Costa Rica. He came on for ineffective captain Jozy Altidore at the beginning of the second half and looked like he belonged. The player former U-20 head coach Thomas Rongen called " a little in the Brian McBride mold, but maybe a little more athletic" was strong enough to hold off defenders like Jhonny Acosta and quick enough to turn the physically imposing Kendall Watson.

But more than the individual moments was the attitude. Wood wanted to win. He fought. He clawed. He pushed and shoved. He cared. On an American team that seems to have lost its way a bit, that desire was refreshing.

So is Wood's ability to score. There was the shocker against The Netherlands in June:

Okay, so that was a tap-in, albeit a nice job of getting open for Jordan Morris' cross.

Five days later, however, there was a deft touch, a pretty turn, and perfectly-placed left-footed laser to beat Germany:
That, my friends, is a goal.

Over the weekend, Wood nearly got the U.S. to penalties when he scored again:

A smart run. A feed from DeAndre Yedlin, another teammate in Wood's age bracket. A difficult finish made to look deceptively simple.

When World Cup qualifying starts in less than a month, Jurgen Klinsmann will look to the younger generation to help lead the way. There was never a doubt that Wood wanted to belong on the U.S. senior team. With his goals in recent months and his performance against Costa Rica, he showed that he does.