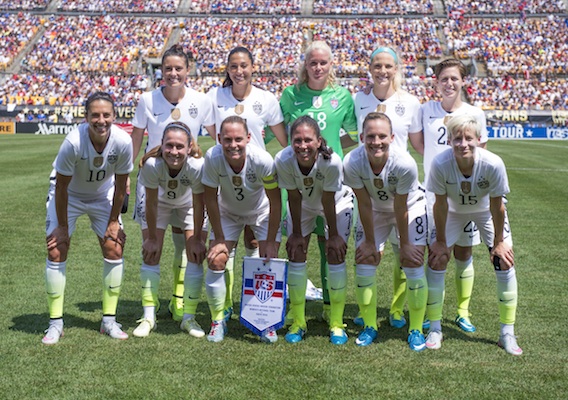 Blowout Win Is Nice, But Does It Help U.S. Women?

IN THE FIRST MATCH of a scheduled 10-game World Cup Victory Tour, the United States women’s national team cruised to a 8-0 win over Costa Rica in Pittsburgh on Sunday afternoon.

The U.S. came out fast, scoring its first goal in the fourth minute of play. The team then added three more tallies before heading into the locker room with a 4-0 advanrage. Heather O’Reilly (2), Christen Press (3), Julie Johnston, Meghan Klingenberg, and Whitney Engen produced the goals.

Here are three thoughts from the win.

U.S. head coach Jill Ellis has said that the Victory Tour will be about finding a “blend” between celebrating the American’s World Cup victory this past summer and preparing the team for the Olympics next summer.

“You always have to have one eye on the future. [The Victory Tour] is certainly a recognition and acknowledgement—not just for the players, but for our fans—to celebrate what we accomplished this summer,” said Ellis prior to the Costa Rica match. “But always with the short window between a World Cup and Olympics, and [Olympic] qualifiers in February, toward the latter stages of this tour we’ll certainly be starting to look toward the future.”

Against Costa Rica, however, it’s hard to tell exactly what the goal was. World Cup heroes Hope Solo, Becky Sauerbrunn, Tobin Heath, and Morgan Brian were left out of the starting XI (as were Alex Morgan, Lauren Holiday, and Kelley O’Hara, who are all battling minor injuries), while Ashlyn Harris, Christie Rampone, O’Reilly, Shannon Boxx, and Amy Rodriguez all started.

Perhaps the lineup choices were designed to give Rampone, O’Reilly, and Boxx—all veterans with distinguished careers—a last run out with the U.S. before the team moves on to Olympic preparation mode, but even that theory doesn't seem to make much sense with Rodriguez starting and Abby Wambach on the bench.

The formation on Sunday also seemed an odd choice, with the U.S. returning to a 4-4-2, especially considering that the U.S.’ play in the World Cup improved considerably when it abandoned the 4-4-2 and moved to a 4-2-3-1.

Given the low stakes of the contest, several players had a chance to state their case for more playing time under Ellis.

Many fans and pundits over the past year have clamored for Ellis to give more playing time to Rodriguez, especially when Rodriguez came off a particularly strong NWSL campaign in 2014.

However, in most instances, when she has been given a chance over the past year, Rodriguez has failed to prove her worth, something that happened again on Sunday. With Morgan and Sydney Leroux battling injuries, Rodriguez started against Costa Rica and reminded fans why she fell out of favor with Ellis in the first place.

Rodriguez struggled throughout the game—getting caught in possession, taking poor touches, and contributing little to the attack.

Poor Amy Rodriguez. Got to show something next half.

On the opposite end of the spectrum, O’Reilly, who saw just nine minutes of action in the 2015 World Cup, was excellent against Costa Rica, scoring twice and picking up an assist.


Had Lloyd and Megan Rapinoe finished two chances inside the six-yard box, O’Reilly would have picked up two additional assists. Regardless, she contributed excellent service from the flank all game long.

With the Olympic roster consisting of just 18 players instead of the 23 chosen for World Cups, Sunday’s performance is just what O’Reilly needed to push herself firmly back into the picture.

O'Reilly scores a brace. She'll be fighting for a spot on the Olympic squad so today bodes well for her chances.

While the 8-0 win is certainly a feel-good moment for the fans and an opportunity for those fans in and around Pittsburgh to see the U.S. play in person, it’s hard to argue these types of results benefit the team.

44,028 out today to see the #USWNT!! Thank you #Pittsburgh and the #BestFansintheWorld!! pic.twitter.com/3foflk7bhr

Many thanks to the Costa Rica WNT for playing the role of the Washington Generals today.

In the months leading up to the World Cup, the U.S. struggled against a number of opponents and Ellis was hesitant to integrate new and younger players into a squad stacked with veterans.

When the U.S. did finally hit high gear in the World Cup, it came largely from changes outside of Ellis’ control, namely the introduction of Morgan Brian into the starting XI; the increased role of Kelley O’Hara; and the switch to a 4-2-3-1—all changes which emanated from the yellow cards picked up by Holiday and Megan Rapinoe in the match against Colombia in the Round of 16.

Yes, it’s important that the U.S. be given a chance to celebrate its World Cup victory in front of its home fans. And, as Ellis has stated, the tour will hopefully be a balance of celebrating the current team while getting ready for Olympic qualifying. But these games are also causing complications for NWSL clubs—who will again have to deal with players leaving and coming back into their squads—and none of the Victory Tour games contain an NWSL tie-in, which would seem to be a no-brainer in promoting the league.

Is there a compelling reason why every home USWNT friendly next year isnt being scheduled as the first half of a doubleheader with the NWSL?

USWNT could have done infinitely more for future of women's soccer in this country by scheduling this victory tour vs. NWSL clubs.

The U.S.’ opponents in the tour will improve—with the U.S. hosting Australia and Brazil in upcoming months—but these two matches against Costa Rica (the U.S. plays the team again on Wednesday) are adding little to the improvement of the squad or the growth of the game here at home.