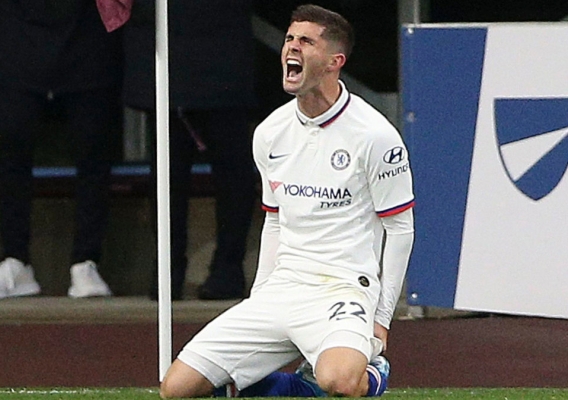 The international break is over and it will be a long time until the next one. Club soccer is where it is at right now and ASN is back with his weekend preview where he examines in detail the 10 best games for American fans to follow in the days ahead.
BY Brian Sciaretta Posted
November 21, 2019
4:00 AM
THE WEEKEND ahead has some great games for American fans to follow as the MLS season is over and all the attention will shift to Europe.

Sure, it’s not as great as it could be. Tim Weah and Tyler Adams are still injured and a few players like DeAndre Yedlin and Newcastle along with Matko Miljevic and Argentinos Juniors won’t play until Monday.

But Christian Pulisic, if ready to go, will be on a huge stage this Saturday. The same with Zack Steffen and Alfredo Morales. Meanwhile, there are multiple games where young American players will face each other this weekend.

Here are the 10 best games for Americans to watch this weekend.

Christian Pulisic was forced out of the last international window with an injury but is possible to feature for third-place Chelsea on Saturday when it heads north for a massive game against fourth-place Manchester City.

Pulisic is in the best form of his career at the moment where he is making weekly impacts for the London-based club. He has scored five goals in his last three Premier League games and is also impressing in the Champions League.

But those opponents in recent league games have been Burnley, Watford, and Crystal Palace. Now Pulisic will have an opportunity against one of Europe’s biggest clubs.

Two of the top young American players will get an opportunity to play against each other on Saturday when Josh Sargent and Werder Bremen host Weston McKennie and Schalke. The two were teammates the past two weeks for the United States national team but will be opponents in Bremen this weekend.

Werder comes into this game struggling with a loss in its most recent game and five straight draws before that. Sargent has two goals from 10 appearances and six starts. His performances have been mostly positive for the club as he continues his progress from last year.

McKennie, however, finds himself in problems of recent years in that he is moving around from position to position, while not finding a way to dominate in any role. Schalke is within striking distance of being near the top as it sits in seventh place but is just two points from second place Leipzig.

Two English-Americans will meet up on Saturday in a matchup that could have implications in the Championship relegation battle.

Antonee Robinson should once again get the start at left back for Wigan Athletic as he has most of the current season. Robinson has played well at times this season but Wigan has been a sinking ship recently with just one point in its previous four games.

Cameron Carter-Vickers, 21, and Stoke City could climb out of the relegation zone with a win and a Middlesbrough loss. That would be a remarkable accomplishment given that went winless in its first 10 games of the season. Carter-Vickers is at Stoke on loan from Tottenham and has been mostly positive while the team has struggled.

The two recently returned to England from the Canary Islands where they were teammates on the U.S. U-23 team. Both players remain strong candidates to start for the team in 2020.

It will be a big game in the Championship for Derby County and its American midfielder, Duane Holmes, as they host second place Preston North End on Saturday.

Holmes, 25, was slated to be on the U.S. Gold Cup roster this past summer but had to withdraw because of an injury. Since then, he has not been able to get back into Gregg Berhalter’s side. What will help Holmes, however, is more goals and assists as well as an improved Derby team that currently sits mired in 16th place.

It hasn’t been a smooth year for Derby which underwent a coaching change in the summer as Frank Lampard took the Chelsea job. There were also problems with off-field issues among a few of its players.

If Derby wants to get back on the right track, Saturday is a big opportunity and Holmes, as is always, should feature.

Fortuna Dusseldorf should have a big test on Saturday when it hosts defending champion Bayern Munich – which is still extremely powerful despite not leading the league at the moment and playing under an interim manager in Hans-Dieter Flick.

Zack Steffen recently took the international window off due to knee tendinitis but still played in Fortuna’s game just before the window. Alfredo Morales was a substitute in the U.S. team’s two games during the window.

Fortuna has played well the past two games but this will be a challenge on a different level and if the team wants to have any chance of success, Morales and Steffen will have to play well.

Now cap-tied to the United States, Sergino Dest will return to Holland and help Ajax maintain its strong six-point grip on the Eredivisie lead. While playing time has been reduced slightly in recent weeks, Dest still seems likely to play as his international window wasn’t as tense – he did not play in the Tuesday’s game for the United States.

But Dest is still ridiculously fun to watch with his ability to take on and beat defenders with the dribble. As someone who will likely be part of the U.S. team for years to come, it’s worth it for American fans to watch his progress.

Heracles is a midtable team sitting in seventh place. Ajax is a heavy favorite but Heracles is not a weak opponent either.

U.S. U-23 teammates Christian Cappis and Emmanuel Sabbi are trying desperately to keep Hobro out of a relegation battle this year – although it still looks like an uphill climb as its sits in 12th place in the 14-team Superliga. This year, three teams will be relegated as the league is planning to reduce its size. Hobro has also gone seven games without a win.

Coincidentally, its last win came against its opponent on Sunday in FC Copenhagen – which sits is second place.

Cappis should once again start in his regular central midfield position with the athletic Sabbi out on the wing. Sabbi has six goals on the season and has been solid.

The interesting questions heading into January is whether or not Hobro are keen on selling either two. Do they cash in? Or do they keep both players and hope to avoid relegation?

Matt Miazga was one of the most surprising names left off the last U.S. national team roster. But with four months to go until the next window comes, the New Jersey-born central defender will build up his case and hope to help in Reading’s effort to push towards midtable.
Brentord boast one of the better defenses in the Championship and goals will be a premium for both teams. Miazga has had a good start to the season playing for a very average team. Now he will hope to translate his strong form into better team results.

Tyler Boyd is not at the form right now that he was earlier this year when he was taking the Super Lig by storm at Ankaragucu. His start to the season at Besiktas was slow and his minutes with the U.S. national team cooled.

But things are improving for Boyd. Maybe not as quickly as he, or his new American fans, would like but there is a positive trend. After weeks of not playing for Besiktas, he got off the bench and scored vs. Sporting Braga. Then in the upcoming weekend, right before the international break, he played the final 15 minutes of a 1-0 win over Denizlispor.


I love backheel assist from Tyler Boyd off the cross from Reggie Cannon. pic.twitter.com/qanA0waZvV

The past international break was decent for Boyd who was a late sub in a 4-1 win over Canada and had a very nice backheel assist in a 4-0 win over Cuba.

Now he is rejoining a Besiktas team that has won three Super Lig games in a row. Boyd is slowly getting back on track and it will be interesting to see if he can take another step forward.

John Brooks has had injury problems over the years but the tall central defender has found himself in good form at the moment – and has been good news for both Wolfsburg and for the U.S. national team.

For the U.S. team, Brooks made his second appearance of 2019 and was outstanding in a 4-1 win over Canada. That win helped get the U.S. back on a winning track and into the Nations League semifinals.

For Wolfsburg, Brooks has been important because the club struggles mightily to score goals as it has just 11 goals for 11 games. That type of output would typically put teams in the relegation zone. But the team sits in 10th place due to having conceded just 10 so far this season. That is the best defensive team in the Bundesliga.

But Wolfsburg has lost two in a row and it needs to stop the skid. Once again its defense will have to lead the way and its opponent on Saturday, Eintrach Frankfurt, will be challenging while playing at home. It will be a big test for Brooks against a strong offensive team playing at home but a lot will be on the line as Wolfsburg will try to get back on track.