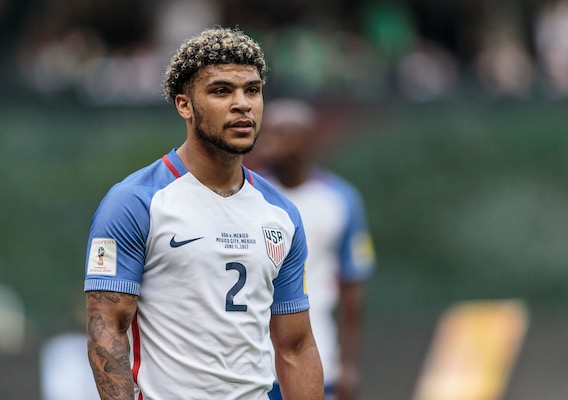 Bruce Arena's 26-man roster—now 25 due to Gyasi Zardes' withdrawal—carries a massive burden as the Yanks' World Cup fate lies in its hands. Here is Brian Sciaretta's assessment of the squad.
BY Brian Sciaretta Posted
October 01, 2017
1:00 PM

ON SUNDAY MORNING United States men's national team coach Bruce Arena announced his roster for the critical pair of World Cup qualifiers that will conclude the 2017 Hexagonal. This group of players that will determine whether America qualifies for the 2018 World Cup in Russia or is forced to go to a playoff in November against an Asian opponent.

There are no major surprises on the roster. Arena has said at multiple points that he did not have the luxury of trying new and inexperienced players at this stage of qualifying. Instead he is going to try to get the team to Russia riding a veteran-laden squad. Should the U.S. qualify, then the doors may open to more players.

Arena included a number of fringe players on his roster—Michael Orozco, Chris Wondolowski, DaMarcus Beasley, and Gyasi Zardes—but these veterans are most likely not going to be starters. If they see the field at all it will mostly like be as subs, and Zardes has already withdrawn from the squad due to a groin injury.

Instead, the discussion should focus on the starters and key players who will determine the United States' World Cup fate. Does Clint Dempsey start? What are the central midfield combinations? Can Jozy Altidore and Bobby Wood play together? Who will be ready to start in central defense? Where does Christian Pulisic line up?

Here are some of my thoughts on the 26-man unit.

Yedlin and Cameron are big additions

The biggest news is the return of DeAndre Yedlin who has missed a significant amount of the Hexagonal due to injuries. In September he was unavailable due to a hamstring strain but the Seattle native has returned to action and has played the past three games for Newcastle United. He will almost certainly start at right back.

That will give Arena an upgrade at the position over Graham Zusi as Yedlin should be able to boost the attack and help the midfield.

Meanwhile, Geoff Cameron played a full 90 minutes on Saturday for Stoke City after missing two weeks with a hamstring injury. The Massachusetts native had a poor game against Costa Rica last month but was a positive addition off the bench in the draw against Honduras.

Cameron has been a stalwart for the United States national team and despite an occasional bad game, here or there he has been a remarkably strong player for the team. His availability is a huge positive.

The most surprising inclusion to the roster is Benny Feilhaber who rarely played under Jurgen Klinsmann and was only part of Arena’s team in 2017 via January camp. It appeared as if his national team career was over, but then he received the call for these two contests.

Why is he back? After the September qualifiers, Arena likely realized that the team needed much better passing in the final third. Pulisic is great but he can only do so much. Feilahber is now past his prime but he still has a unique field vision that is different from anyone else in the pool and he has experience in high-pressure games.

It will be interesting to see if Feilhaber plays serious minutes in the upcoming qualifiers but if he does, he will probably be heavily motivated to succeed.

Many of the more notable omissions could be expected. Timothy Chandler has not been in the picture under Arena and never impressed during the Jurgen Klinsmann’s era. It was already known that Arena was not going to experiment with talented youngsters like Weston McKennie and Jonathan Gonzalez.

But Fabian Johnson is the most surprising omission and his absence is due the poor year he has endured for both club and country. So far in the 2017-18 season he has yet to eclipse 200 minutes and is likely not in the best fitness for these games. In addition, his performances for the national team in 2017 have been lackluster. He was completely ineffective against Costa Rica last month.

Johnson is not out of the picture for the U.S. team going forward but he is going to have to raise his game at Borussia Monchengladbach in order to get back into the American squad.

Matt Besler's health will be something to monitor in the coming week. Sporting Kansas City said its captain was questionable ahead of last night’s game against Vancouver but Besler never made the matchday roster.

Last weekend he was forced out of a game against the LA Galaxy following a collision with Jack McBeam—Besler took an elbow in the clash and was bleeding profusely. Now, after missing the past week, Besler will arrive in camp in an uncertain condition.

That is significant because Besler was the only starting central defender who put in a solid outing in September, outplaying Cameron, Tim Ream, and Omar Gonzalez. Besler also performed well throughout the 2017 Gold Cup.

With John Brooks injured, Besler and Cameron are likely to be the first-choice central defense pair for these qualifiers—if Besler is healthy enough to play.

lack of speed up top

The situation at forward is not ideal. The Yanks scored just one goal in the the two September qualifiers and that tally came on a broken play after a free kick. Of course, the creativity in the midfield did not help lay the foundation for opportunities but the team will have to be clinical for whatever chances comes its way.

The injury to Jordan Morris hurts the U.S.—not because he is better than Jozy Altidore, Bobby Wood, or Clint Dempsey but because he his game-changing speed gives the U.S. another weapon. Arena could return to the Altidore-Wood combination he used against Costa Rica but neither looked comfortable in that 2-0 loss.

And then there's Dempsey. Is he a super-sub or a starter? It's interesting to see Juan Agudelo listed as midfielder instead of a forward but he can obviously move up top if necessary.

Arena has some important decisions in the days ahead. It will be interesting to see how it all plays out, and the stakes could not be much higher.

What do you think of this 25-man squad? Will the Yanks get it done? Share your take below.