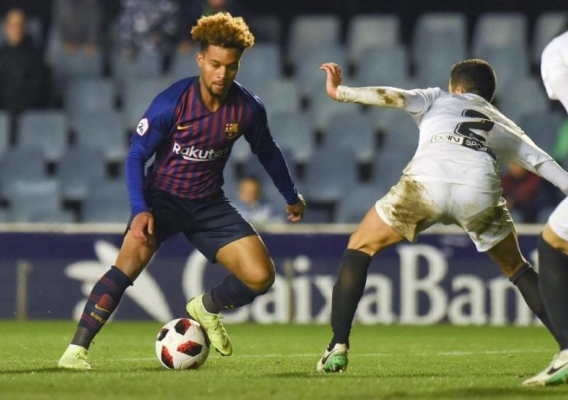 Tab Ramos has been wanting to get Konrad De La Fuente into a U-20 camp for most of the cycle. Now with the World Cup fast approaching, the La Masia product is finally playing with the team and had a standout debut in a 2-2 draw with France. ASN's Brian Sciaretta spoke with the Miami native.
BY Brian Sciaretta Posted
March 23, 2019
3:55 AM
THE UNITED STATES U-20 team is in the final preparations for May’s World Cup and the competition to make the final 21 player roster is intense. After the team won CONCACAF in November, there are even more players emerging and building cases to make the final cut.

Konrad de la Fuente, 17, is one of the most exciting prospects on the team. The Miami area native is currently a member of FC Barcelona’s U-19 team and has been gaining valuable experience in the UEFA Youth League where he has a goal and an assist in seven appearances so far.

He is also one of the youngest players in the current U-20 pool, is eligible for the 2021 U-20 World Cup as well and has has played with U.S. youth teams since the U-14 level. U-20 head coach Tab Ramos has been trying to bring in into camp for awhile but release issues have been a problem. With this camp, he is finally able to join the squad for the final camp before the start of final World Cup preparations.

“I know [Tab] has been trying to bring me into U-20 camps,” de la Fuente told ASN Thursday night from Spain. “I am happy I was able to make it to his one. I am just trying to take advantage of this one. I am really excited to be part of this team. It's a great group of guys and I think the team can do big things. I think we can compete really well against the best teams in the world.”

And in his debut with the U.S. U-20 team against the powerful French team, de la Fuente did not disappoint as he scored a key goal as the U.S. team erased a 0-2 deficit and played to a 2-2 draw.


The right footed de la Fuente offers Ramos versatility across the entire font line in a 4-3-3 setup. (“I think my best position is as a left winger,” de la Fuente described. “I am comfortable at all of the forward spots but mostly as a winger”).

Before joining the current U-20 team, de la Fuente was most recently with the U.S. U-18 team where he stood out as one of the team’s best players.

“Konrad is special,” said former U.S. U-18 head coach Omid Namazi who frequently worked with de la Fuente. “He is very dynamic with the ball at his feet where he can run at defenders and create goal scoring opportunities for himself. But he is also clever enough to be able to find that final pass to create for others. I used him mostly as a Center Forward (as a necessity) and he was quite good there, but I think he is best utilized as a winger or and off-forward in a 4-4-2.

“Anyway, he can adapt to different game situations as he is a smart and cerebral player who sees the game very clearly.”

Marcelo Palomino, a teammate with de la Fuente on the U-18 team, agrees with Namazi.

“Konrad is a great player, extremely explosive and great on the ball, very forward mentality and can take anyone on 1v1,” Palomino said. “I think he already is and is going to continue to be a very big asset to the US, and as we saw he just scored with the u-20s against France so he’s someone we definitely want on our side.”

But de la Fuente is different. Currently involved in FC Barcelona’s famed La Masia youth academy, De la Fuente is proud to be one of the few Americans to have played at La Masia and believes what sets it apart is the enormous quality of players and the superior coaching. Since he’s been there so long, he has adjusted well and no longer feels different due to his American background.

“It's a really good feeling playing against the best players and training with them - learning from along with the coaches every day,” de la Fuente explained. “You gain a lot of experience from that and you get a lot better. Since I've been there as a young age, I don't really feel much of a difference with all the other guys. I am very comfortable there and it's kind of like my home now.”

How de la Fuente arrived at Barcelona is different compared with how other American teenagers have made the jump to Europe. He was born in Florida to Haitian parents and moved to Madrid at the age of 10 when his father took a job working for the Haitian embassy in Spain. There he began to blossom as a player but his break came when he was playing for CF Damm in Barcelona. CF Damm is a club that specializes in youth development and with its strong academy, it helps its players progress to the professional ranks with other clubs.

It was not long at CF Damm when de la Fuente stood out and was quickly brought into La Masia.

“I was playing at a local club in Barcelona first, La Damm, and FC Barcelona has scouts all over,” de la Fuente recalled. “I caught the eye of one of them and from there they just called me.”

As for eventually making the first team at Barcelona, de la Fuente does not discount the idea of eventually joining one of the world’s best clubs: “I don't think it's impossible. If you work hard, you'll get opportunities. You just have to make the most of them.”

De la Fuente enjoys living in Spain and rarely returns to the United States due to his busy schedule at Barcelona. In the years ahead he will apply for Spanish citizenship (which happens after 10 years of living in Spain but he can begin the application process after nine years) which should allow him to play throughout Europe should he move beyond Barcelona. (“For now, I am only an American citizen” he explained. When asked if he had ever been approached by Haiti’s soccer federation, he quickly said “not that I know about”).

As a 2001-born player, de la Fuente doesn’t know many of the players on the current roster outside Matthew Real and Uly Llanez. He insists he isn’t thinking about the next U-20 team and rather just making the current roster for the upcoming World Cup this May in Poland.

Even though his primary focus has been climbing the ranks at La Masia, de la Fuente has been playing close attention to the development of U.S. Soccer and has been impressed with the talent among the U-20 team and believes it is building to something special. If all goes according to plan, he will make his U.S. debut in a major youth tournament in just a few months.

“With my club, I am always there and that is what I am focused on but the U-20 World Cup is definitely one of my goals and I definitely want to be there,” de la Fuente said. “I just have to work to get there. [American soccer] has gotten a lot better over the years. On this U-20 team, there are a lot of players who are playing in Europe who are there doing really well. I think this group can go really far at the U-20 World Cup and that's where it starts. From there you can build confidence. Eventually you can win it, it's not impossible.”