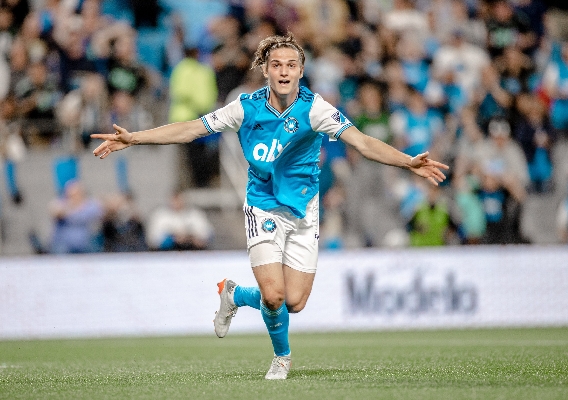 Recent years have shown that there is still plenty of impressive talent that comes from the MLS draft. The last three drafts have produce players such as Tajon Buchanan, Daryl Dike, DeJuan Jones, Henry Kessler, Alistair Johnston, and Frankie Amaya. In 2022, Ben Bender looks to be the cream of the crop and has been very impressive for Charlotte. ASN's Brian Sciaretta spoke with the Baltimore native about his strong start to his pro career.
BY Brian Sciaretta Posted
April 20, 2022
1:50 PM

FOR MANY PLAYERS of the 2000-2022 birth years, the COVID pandemic came at the worst possible time. Few of these players were established and the pandemic limited chances for players to play, get noticed or develop. While some first-team leagues returned within four months of the initial shutdown, the lower and youth levels remained shut down. When play finally resumed, there was a backlog of players in the pipeline, and many were very rusty.

Ben Bender, 21, was part of this tricky path but has navigated it well. When the pandemic hit, he was preparing to enter college with the University of Maryland – a program that has produced many national-team caliber players (Zack Steffen, Taylor Twellman, Maurice Edu, Omar Gonzalez, Robbie Rogers, Clarence Goodson, Eryk Williamson, Danny Califf and Donovan Pines have all represented the U.S. national team in official competitions). When he arrived on campus, the season was postponed until the spring leaving 2020 as almost a lost year.

But Bender worked extremely hard off the field and it set himself up for a big 2021.

“I think going into Maryland, that was probably the best possible spot for me to develop,” Bender told ASN. “Looking back on it, it was probably good. I grew athletically so much more in that first year -  working out and just training with guys that were bigger, stronger and faster. I actually think that fall season of 2020 helped me to get stronger for the spring season one when everyone resumed play for college. It definitely was tough not to play games because those are how you get better. But it set me up for a really good sophomore fall season… I wouldn't have left if it wasn't a Generation Adidas contract.”

One of the common criticisms of the college game as a developmental path for professionals is the short season. When kids in MLS or European academies have seasons that last most of the year, the college season is three months. In 2021, however, Bender found himself loaded with games. The NCAA had a spring season in 2021 to make up for the 2020 season and then had a fall season for 2021. In the summer, he had the chance to play for FC Baltimore Christos of the NPSL.

The result is that Bender’s game took off. By the fall, he was a United Soccer Coaches First Team All-American. Still, 20, he signed a Generation Adidas and was signed by Charlotte with the first overall pick in the MLS draft.

“I didn't know  I was coming to Charlotte until a week or two before the draft. I had to pack up everything and then move to Charlotte real quick. The pre-season was super fun, but it was definitely a transition. It was a big step from college. The speed of play was really fast and everyone was super strong. I had to improve in those areas. And yeah, I've just been working really hard trying to get better, and I'm learning every day from the coaches, from the players and veterans on our team.” 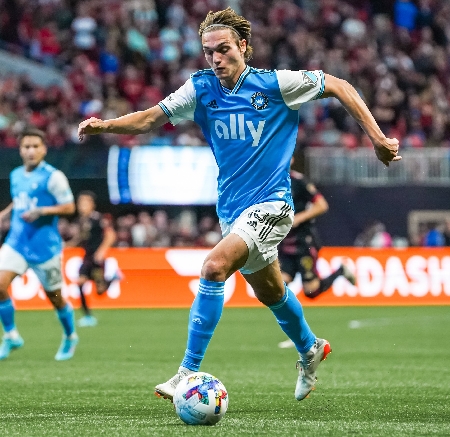 Bender has been one of the best surprises in the league in terms of young Americans who are new to the league. Playing primarily on the left side of the midfield, Bender has a goal and three assists through the first eight games helping an expansion team get off to a respectable start under Miguel Ángel Ramírez.

“It's always tough for expansion teams,” Bender said. “We've done pretty well so far and we're hoping for a few more wins. We're always going to compete and we're going to give our best effort every time we step on the field, even when we go through the sufferings and the trials of the year. We will stick with the game model that Miguel provides for us. That can take us a long way.”

“He’s winning the respect of everybody because - he’s so good,” coach Miguel Angel Ramirez said about Bender. “He’s becoming a leader because he’s been important for us and everybody knows.” 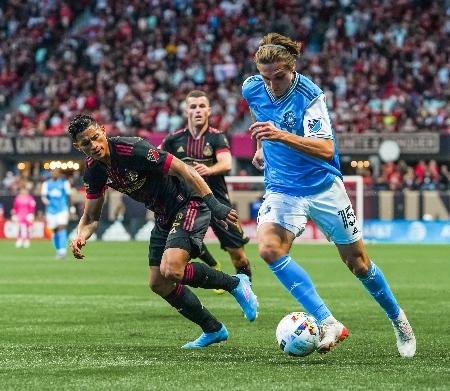 As most know, the landscape of soccer has changed in this country. Top young American players typically don’t play college and high school soccer. Instead, they opt to join academies – typically in the United States although a few do move abroad at an early age.

“In college soccer, there are tons of good players out there,” Bender said. “I think that the academy path is a really awesome route to the pro level, and I think that's how it how it should be. But I think that college soccer is and should continue to be a way for players to develop academically and in soccer too. It is still super relevant.”

Local Ben Bender gets his 3rd straight start for @CharlotteFC and takes just 6 minutes to get an assist!

“It was a tough decision for me to play in high school instead of academy,” Bender said. “Emotionally, it was important. You are with some of your best friends that you grow up with and then you go to high school where you get to play with them. The academy is the better level. So that was that was really hard for me to decide where to play. It ended up working out. Looking back on the high school years - I have all those relationships and I was a part of a really awesome community. And so that's something that I'll remember for the rest of my life.”

Bender has a lot of goals on his plate. He wants to play a role in Charlotte having a strong inaugural season and grow as a player. Thus far he is off to a strong start. There is also the international stage, and that also drives Bender because he has never received a youth national team call-up.

The full national team is still a long way off, but Bender might have another avenue. If the U.S. U-20 team succeeds this summer to qualify for the 2024 Olympics, that tournament will then be open to the 2001/02 birth years (Bender was born in 2001). Bender has been made aware of that and certainly hopes that could open a door as well.

“As a personal goal, I want to try and be to make a national team camp,” Bender said. “It would be amazing and an awesome opportunity.  Growing up, I thought I had the opportunity, but I never got called in. All my time before signing a pro contract, I pretty much put my head down and wanted to work as hard as possible to make it professionally and then hopefully play for the national team.”