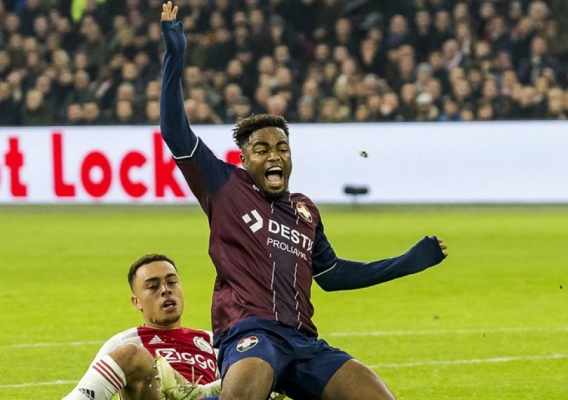 For Americans abroad, it was one of the worst weekends in years. The good news, however, things can only get better from here. Here is Brian Sciaretta's weekly detailed walk through the mess.
BY Brian Sciaretta Posted
December 09, 2019
5:00 AM
THE WEEKEND is over and American fans should be thankful about that. For American players in Europe, it was an absolutely terrible three days. Between Friday, Saturday, and Sunday most American players were part of poor performances, ugly losses, limited or no playing time, injuries, or some kind of combination of those.

So how bad was it? It’s tough to figure out where to begin.

Of course, key players like Tyler Adams, Josh Sargent, and Tim Weah were out injured – as expected. And others like Julian Green, Charlie Kelman and Lynden Gooch continued to miss time. For the struggling Stoke City, Cameron Carter-Vickers was a late scratch over the weekend due to an illness but the 2-1 loss to Hull City sent the Potters further into the relegation zone (but at least it gave Eric Lichaj the opportunity to be a rare American who won and played well over the weekend). Added to the mix was an injury which kept DeAndre Yedlin out for a second straight week.

The players who all rarely play or even see the bench anymore saw their poor situations continue. Jonathan Amon is no where to be seen for Nordsjaelland anymore. The same with Andrelecht’s Kenny Saief and Rangers Matt Polster who are not even dressing for their clubs right now. Khiry Shelton reportedly might be on the move at Paderborn after he made just two appearances for the Bundesliga cellar-dwellers. Shelton also did not make the 18 this weekend.

In Denmark, Hobro is in a tough relegation battle and was unable to come up with a win at home against Horsens. In the 0-0 draw, three Americans dressed but only Christian Cappis played (90 minutes for Hobro). U.S. U-23 winger Emmauel Sabbi did not get off the bench for Hobro and Horsens’ American goalkeeper Michael Lansing did not play and he has lost his starting spot after a costly red card last month.

Things weren’t much better in Belgium as Brendan Hines-Ike was an unused substitute for Kortrijk in a 1-1 road draw with KV Mechelen. Meanwhile, former U.S. goalkeeper Ethan Horvath continued to be glued to the bench for Club Brugge in a 2-1 win over St. Truiden – where American Chris Durkin made his first start in the Belgian League (which we will discuss later).

But negative news was littered throughout most of the non-major European leagues. Jonathan Klinsmann didn’t play for St. Gallen, Niko Hamalainen and Kilmarnock lost to Livingston 3-0 in the Scottish Premier League. VVV-Venlo is now out of the Eredivisie relegation zone but Haji Wright is still looking for either his first goal or assist in 15 appearances (12 starts) for the club.

At the youth level, the key American players of Alex Mendez at Jong Ajax and Richard Ledezma at Jong PSV had little to report from the weekend. Konrad de la Fuente scored his sixth goal of the year for Bacelona's Juvenil A and Uly Llanez was part of the build-up to a goal for Wolfsburg's U-19 in a 3-2 win over St. Pauli. The good news for Llanez at the moment is that the offensive struggles on Wolfsburg's first team are ongoing and might force a shake-up.

But after the youth levels and the smaller leagues, you start working up the chain and it only continued to get worse.

Former U.S. international Geoff Cameron can hold his head up high after playing a full 90 for Queens Park Rangers in a 2-0 win over Preston North End. As previously mentioned, Eric Lichaj and Hull City defeated a bad Stoke City team that was without American Cameron Carter-Vickers.

The rest of the weekend in the Championship was a disaster for Americans.

Antonee Robinson and Wigan Athletic had the worst weekend in a “six-pointer” relegation contest. With Wigan’s season in a tailspin, it has slipped into the relegation zone in 22nd place but was playing the 21st place team (and the first team into safety) on Saturday in Luton Town. As usual, Robinson got the start and went the distance. In a game they absolutely had to have, Wigan held a 1-0 lead into the 87th minute but conceded an equalizer in the 88th minute and then allowed a winner in stoppage time for a brutal loss that sank it deeper into the drop zone. But everything that can go wrong is going wrong for Wigan and no one is playing well. The team now has two draws and six losses over its last eight games (thereby earning just two out of a possible 24 points).

In a game Derby County could have used to start an upward climb, it instead looked lackluster in a 1-0 loss to Blackburn. Duane Holmes went the distance for Derby but the club remains in poor shape offensively with just two goals in its last five games. Those offensive struggles now has the club stuck in 16th place.

In a game where it could have moved closer to the top two, Fulham fell 2-1 at home to fellow promotional contenders Bristol City. Tim Ream went the distance for Fulham which remained in third place but is now eight points behind second place Leeds United.

Reading might find itself in a third straight relegation battle if its not careful and Saturday’s 2-3 loss at home to Birmingham City was ugly. With the game tied 1-1 at halftime, Matt Mizga was pulled to change the team’s tactical formation – and it was a disaster as the team crashed at home.

Fortuna Dusseldorf travelled to Borussia Dortmund in a difficult test against one of Germany’s best teams. Goalkeeper Zack Steffen and Alfredo Morales earned the start in goal and in central midfield respectively. Unfortunately for Fortuna, it did not put up much of a fight in a 5-0 loss. Steffen could have done better on the third goal but was generally hung out to dry. Morales did not play well and was overmatched in the midfield.

The best news of this game is how 2019 U.S. U-17 World Cup attacking midfielder Giovani Reyna made the bench for Dortmund but we’ll cover that later.

Weston McKennie continues to be utilized as a player to provide cover, as opposed to in one set position. On Saturday, McKennie played in central defense for Schalke in a 2-1 loss on the road to Bayern Leverkusen. McKennie had some nice moments, and won some impressive aerial duals. The position requires a lot of responsibility and Schalke boss David Wagner isn’t going to put just anyone there. On the other hand, it was clear at times central defense isn’t his position and will unlikely ever be his best position.

Finally, in the Bundesliga, John Brooks and Wolfsburg fell to Freiburg on the road in a predictable 1-0 scoreline. Why is it predictable? Well, it falls in the mold of Wolfsburg having the best defense in the league with 14 goals conceded in 14 games. It also has the second to worst offense (behind Koln) having scored just 15 goals in that span. John Brooks has been very good this season but the defense has simply been under too much pressure to keep clean sheets – or otherwise lose points.

Also in the Bundesliga, Timothy Chandler didn't get off the bench - again - for Eintracht Frankfurt in a 2-2 draw to Hertha Berlin. Fabian Johnson was nowhere to be seen for Borussia Monchengladbach in a big win over Bayern Munich.

In the lower tiers of Germany, the news was not much better. Terrence Boyd could not replicate his heroics of last week and 3.Liga promotional contenders Hallescher lost to Kaiserslautern 1-0. After two very bad outings, Bobby Wood returned to the bench for Hamburg (which lost 0-1 at home to Heidenheim). Kevin Lankford did not make the bench for St. Pauli and Sebastian Soto did not get off the bench for Hannover. German-American Jann George (called up once to the U.S. U-23 team in 2011) went the distance in midfield for Jahn Regensburg which defeated St. Pauli 1-0.


Sergino Dest earned the start for Ajax on Friday against Willem II and the Eredivisie leaders lost its first game of the season in a dreadful 0-2 defeat at home.


Dest, 19, had his usual moments where he was smooth on the ball but was once again prone to defensive mistakes. In this game, he was beaten by an attacker and clumsily tackled him the box to concede a penalty. The new U.S. national team fullback was lucky he was not shown a red card.

For Dest, he continues to show why he is a very promising young fullback who still has a lot to learn. Fortunately for him, Ajax tends to have a lot of games in the Eredivisie where it can give young players a lot of minutes due to the talent difference between itself and opponents. But will Dest continue to play in Champions League games – such as this week against Valencia?

Pulisic and Chelsea fall to Everton


This game wasn’t pretty. Chelsea came into Saturday’s game away at Everton looking to continue its upward trend in the Premier League while also building momentum for its midweek Champions League must-win game vs. Lille. Its opponent was in the relegation zone and is coming off a coaching change.

Instead, Chelsea fell 3-1 and will limp into the game against Lille. It now has three losses and a win over its last four Premier League games.

The team looked tired and Pulisic was not nearly as sharp as he was against Aston Villa this past week. He played three games in eight days and looked fatigued. It is easy to understand why as his minutes have accelerated since October. But how will he and the rest of the team adjust?


There were a few things that went right this weekend that American fans should take note. As mentioned, Giovani Reyna made the bench for Borussia Dortmund. It is puzzling why he didn’t debut with Dortmund clearly in command over Fortuna Dusseldorf but it was a sign that should encourage the youngster.

Reyna becomes the second American teenager in recent weeks to make the bench for a top-level club as 2001-born defender Owen Otasowie made the bench twice recently for Wolverhampton – although he did not take the field in either game.

Chris Durkin earned his first start for St. Truiden in Belgium’s top flight and is part of the club’s youthful midfield which also includes Santiago Colombatto (2019 U-20 World Cup midfielder for Argentina). Despite the loss to leaders Club Brugge, Durkin showed both rust and promise in the No. 6 role. Certainly it was a performance from which he can build.

Erik Palmer-Brown also earned the start for Austria Vienna in the Vienna Derby away at Rapid Vienna. It was the 330th time the two rivals have met. This is one of the most intense games Palmer-Brown will play this season and it finished 2-2 while Austria saw its 2-0 lead evaporate. Still, for Palmer-Brown he has now started five games in a row and the club is trying to work its way into the top half of the table.

Also in Austria, Jesse Marsch and Red Bull Salzburg stayed atop the table with a 5-1 romp over Swarovski Tirol. That snapped a run of two straight draws although Salzburg is still undefeated in the league.